Champagne Mumm is to enter the drinks space race later this year with the launch of a new fizz, with both the bottle and accompanying glasses specially adapted for consumption in zero gravity conditions.

Champagne Mumm is to officially unveil is Grand Cordon Stellar in September this year, following a three-year project in partnership with space design specialists Spade.

The Champagne features a “revolutionary new bottle and glass concept” while the liquid itself takes on “new and unsuspected taste characteristics,” according to Mumm’s cellar master Didier Mariotti.

Founder of Spade, Octave de Gaulle, stated that the major challenge was actually getting the wine out of the bottle when exposed to zero gravity.

He said: “For the last 40 years, space travel has been shaped by engineers rather than designers. Instead of seeing zero gravity as a problem to be solved, we look at it as a design possibility. The big design challenge for Mumm Grand Cordon Stellar was actually getting the liquid out of the bottle.” 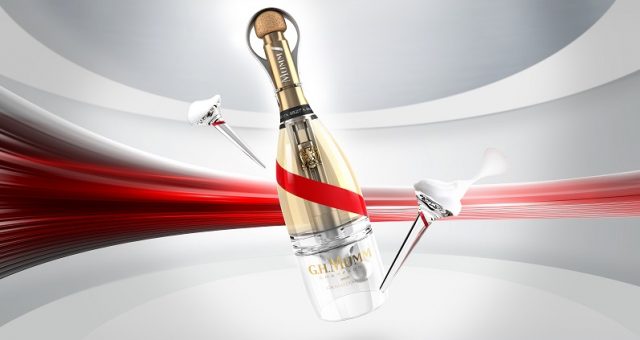 Conditions found in space also change the drinking experience too.

“Because of zero gravity, the liquid instantly coats the entire inside of the mouth, magnifying the taste sensations. There’s less fizziness and more roundness and generosity, enabling the wine to express itself fully”.

Earlier this year, a similar product, but for beer, was launched by space engineer Dr Jason Held.

The bottle, which uses modified technology from fuel tanks to defy zero gravity, includes a ‘wicking’ insert that allows the beer to flow in zero gravity.

Made from black aluminium, the design was said to be inspired by the “unique surface of the moon” and “the sensation of floating in space” and was the result of a partnership between Saber Astronautics and Jaron Mitchell of 4 Pines Brewery.