The environmental impact of stopper production and disposal is rising in prominence – but how green is your closure?

Just when you thought that the closure debate was coming to an end, a new source of contention has arisen. And no, it’s not a new taint, or a fresh claim concerning oxygen transmission rates.

Rather, as this month’s edition of the drinks business highlights, today’s hot topic is the environment – that is, the effect on the planet of producing and disposing different types of stopper.

So why have the eco credentials of closure types come under the spotlight? One reason is the heightened awareness among consumers of green issues, particularly the carbon footprint of packaging and the problems caused by waste – exacerbated in the past year specifically by images of plastic pollution at sea in Sir David Attenborough’s Blue Planet II TV series.

An interest in the environmental credentials of closures is also coming to the fore as other problems for the sector diminish – most notably the topic of taints, above all those created by TCA.

Essentially, with the argument shifting from the technical performance of different stoppers, the environmental implications are becoming a decisive factor in the selection of closure type.

But just how green is your choice of stopper?

As Sally Easton MW reminds us in an extensive article in the February issue of db, the first life cycle assessment of closures is nearly 10 years old, but the results of the study are still relevant. And that’s because key to the difference in the eco credentials of the various types of closures is the material used, and these are still the same, for the most part.

This report was commissioned by Amorim and published in November 2008 by PricewaterhouseCoopers/Ecobilan, following a peer review. It showed that the whole-piece natural cork production produces the least CO2, and screwcaps the most – the mining and refining of aluminium used to make screwcaps is energy intensive. Plastic stoppers fall between the two extremes.

The production of cork, whether it is used for stoppers or not, has an environmental benefit, due to the cork forests managed for its production.

Free from pesticides or fertilizers, and planted at a low density, the cork forest is one of the most diverse natural habitats in the world, and it acts as a carbon sink. Indeed, the Portuguese cork forests are said to absorb 4.8m tons of CO2, representing an offset of 113.2g of CO2 per cork, according to the Cork Quality Council. 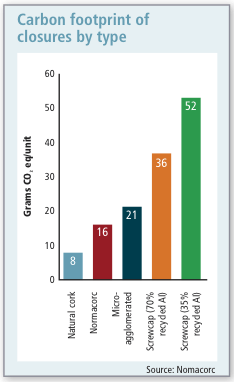 Responding to the stronger eco-credentials of cork, in 2013, Nomacorc created “the world’s first zero carbon-footprint wine closure”. Called Select Bio, it is partly made with plant-based polymers derived from sugar cane, and, the manufacturer says, the bio-plastics contribute a negative carbon footprint value that fully offsets the positive emissions originating from conventional raw materials in the product.

As Easton points out, not only is Nomacorc now being rebranded as Plantcorc, but it is also spearheading the creation of a new closure category: ‘renewable alternatives’. Nevertheless, bioplastics themselves aren’t free from controversy, not least because the farming of the sugar cane used in their production has its own ecological implications.

CO2 production is not the only environmental issue facing closures – there’s also the issue of water waste to consider. When water consumption during closure production is considered, plastic stoppers use the most and screwcaps the least, while whole-piece natural corks fall approximately between the two. So, while aluminium products require a lot of energy in their production, the use of water is minimal for the creation of a screwcap.

While the single-piece natural cork is deemed relatively clean, it is important to note that micro-agglomerated corks have different properties and production requirements.

In a Nomacorc study on carbon emissions published in April 2008, before the Amorim report, it was shown that agglomerated corks have a higher Carbon Footprint than the synthetic closure. This is down to the processing of the cork granules – Amorim washes them using water at 70ºC then puts them through a steam-distillation process called ROSA. This is to remove any potential wine-spoilage compounds. Diam treats cork granules for the same reason, but uses the Diamant procedure, in which ‘supercritical CO2’ extracts the unwanted compounds.

But there’s another issue for micro-agglomerated corks: the glue used to bind the cork granules. Typically employing a type of plastic, it is not easily recycled, nor will it biodegrade. Comprising as much as 25% of the stopper, big agglomerate producers Diam and Vinventions are working on closures that use naturally-sourced binding agents, from beeswax to corn sugar.

And this brings us to the final environmental issue facing closures – recycling. As we reported last year, the majority of all stopper types go to landfill. The advantage to using a natural cork is that the product will slowly biodegrade, but even so, the cork industry is working to encourage retailers to feature collection points so corks can be recycled – even if it’s so they can be ground for making compost.

Meanwhile, aware of the higher environmental impact of screwcaps, Alupro (Aluminium Packaging Recycling Organisation) has launched the ‘Leave Your Cap On’ campaign for the UK. Part-funded by Guala Closures, it encourages residents to recycle aluminium screwcaps along with the glass bottles on which they came.

Plastic stoppers can be recycled, but the amount of plastic collected and recycled is small (less than 20% in the UK). And, as for bio-plastic stoppers, if these get into the PET plastics recycling stream (and the two are hard to tell apart), then the resulting recycled plastic product will be negatively affected. Furthermore, a 100%-bioplastic stopper won’t necessarily break down in landfill – they generally need the presence of oxygen and ultraviolet to degrade.

While a consumer may not choose a wine based on the eco-credentials of its stopper, the environmental impact of packaging is becoming an increasingly important factor in closure selection among winemakers. As a result, it is driving new innovations in the stopper business. But, despite all the scientific developments, when judged from a purely green perspective, it’s the oldest stopper that comes out on top – the whole-piece natural cork. 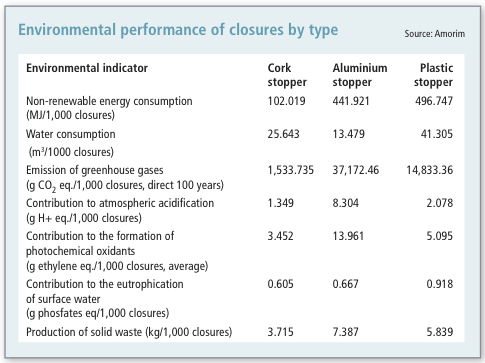