The concept: Alain Ducasse at The Dorchester is one of the jewels in London’s culinary crown and one of only three restaurants in the capital to hold three stars, alongside Restaurant Gordon Ramsay in Chelsea and The Araki in Mayfair.

Ducasse needs no introduction. Born in southwest France, the chef has built up an enviable empire of 25 restaurants, including Le Jules Verne in the Eiffel Tower; Alain Ducasse au Plaza Athénée, which famously removed meat from its menu in 2015; and Restaurant Le Meurice at the sumptuous five-star hotel in Paris.

One of the world’s most decorated chefs, Ducasse has 21 Michelin stars to his name – a feat only eclipsed by fellow Frenchman Joël Robuchon. His contemporary French restaurant at The Dorchester turned 10 last October. 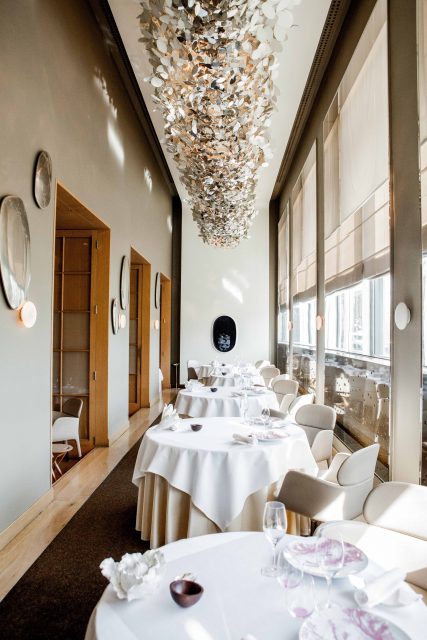 The décor: With its colour scheme of beige, cream, tan and taupe, the interiors are cosy and pared down. Tables in the wood-panelled room are placed generously far apart, and the overall feel of the space is one of relaxed luxury.

On my Thursday evening visit the room was buzzing with a refreshingly diverse mixture of guests, including a couple in their early twenties.

On each table is a white ceramic vegetable sculpture by French artist Jean-Paul Gourdon, from asparagus spears to intricately layered artichokes. We shared our table with an alarmingly lifelike cauliflower.

The food: While Ducasse visits the venue regularly, he has left the day-to-day running of the restaurant to his Nice-born protégé, Jean-Philippe Blondet, who shares Ducasse’s philosophy of letting the ingredients shine and staying true to their essential flavour. According to Ducasse, “the product is the only truth”.

Working with seasonal ingredients sourced from quality producers in France and the UK, Blondet’s cooking shows a deep understanding of traditional French techniques and his modern French dishes are executed with flair.

One of his favourite ingredients is black truffle from Périgord. “I find black truffle fascinating, with such powerful aromas yet fine subtleties. To me, it embodies the richness of winter,” he says.

On my visit I was lucky enough to be reviewing Blondet’s seven-course black truffle tasting menu, which will be on offer at the restaurant until March. At the beginning of the meal our waiter arrives carrying a wooden box.

Having got our attention, he opens it slowly, as if presenting us with the Crown Jewels. Inside are two giant truffles. Craggy, rock-like and marbled with white, their earthy fumes fill the air, whetting our appetite for the feast ahead.

Shortly afterwards a different waiter presents us with a pyramid of gougères as light as air. There are so many of them, finishing the platter becomes a challenge we’re determined to win, not wanting any of the cheesy globes to go to waste.

The bread selection is so inviting and abundant it threatens to annihilate my appetite before the first course arrives. The bacon-flecked fugasse is a thing of beauty. Everything is better with bacon. And butter, which is served in pink marble dishes.

Signature dishes: Among the highlights of the tasting menu is the first thing we try – a solitary scallop, hand-dived from Scottish seas, and served with braised chicory and a generous shaving of truffle.

The pearlescent scallop was perfectly cooked, its flesh silky and sweet, with a bitter hit from the chicory.

Another highlight was a rustic leek and potato ‘cookpot’ with a brioche crust. Comforting in the extreme, the earthy flavour of the potato married seamlessly with the black truffle, proving that the simple things are often the best.

The pièce de résistance was a sliver of truffle-glazed Landes chicken served with squares of crispy chicken leg blanketed in black gold. A symphony of savoury flavours, the decadent dish was Ducasse all over – indulgent and luxurious yet traditional at its heart.

The meal wasn’t entirely without fault. Our lobster was like revenge – served cold, and a gooey slice of truffled brie was perfectly pleasant, but something I could easily find at Waitrose, but these little blips were unable to taint a near perfect experience.

The drinks: Wine lovers are in for a treat as the restaurant boasts a list of over 1,000 bins. Belgian born head sommelier Ruben Desport is as charming as he is tall. A Burgundy lover, he treated us to some exquisite liquid treasures designed to pair with our truffle-laced dishes.

Among the highlights was an almond-scented 2013 Meursault from Ballot Millot & Fils; and a heavenly Puligny-Montrachet Premier Cru Les Referts 2014 from Jean-Marc Boillet, whose rich, buttery, honeycomb palate was balanced by vibrant citrus flavours and perfectly handled oak.

Our Grand Cru Chambertin from Domaine Taupenot-Merme meanwhile, echoed the menu with its earthy, forest floor notes intermingled with red fruit. The best food and wine match of the evening was the zippy Zind Humbrecht Muscat Ruben paired with our seared duck foie gras starter. The wine cut through the fat like a samurai sword through silk.

Who to know: One of the things that most impressed me about my evening was how cleverly judged the service was, and how unstuffy restaurant director Enrico Baronetto and his team were.

The attention to detail is forensic, but the venue has moved with the times and understands that diners want to have fun when they go out, particularly when they’re spending vast amounts of money.

Don’t leave without: Ordering dessert and staying for tea. The dangerously boozy rum baba stuffed with Chantilly cream threatened to finish us off, but we somehow found space for a feather-light cloud of Cointreau soufflé.

To pair with it, Ruben pulled out all the stops, serving us a golden glass of Château d’Yquem 1997, whose unctuous palate of marmalade, honeycomb, burnt sugar and orange peel proved a heavenly match for the soufflé.

Teas, meanwhile, are theatrically made tableside from a trolley heaving with herbs grown on the hotel’s roof. My basil mint number was so soothing I could have fallen asleep on the spot.

Last word: There’s no getting around the fact that Alain Ducasse is expensive – the truffle menu costs £280 a head. But it is a special occasion restaurant to save up for and look forward to.

The set three-course lunch costs £65 and includes two glasses of wine and coffee, so it’s possible to go without having to remortgage your house.

Being a three Michelin-starred restaurant, I was expecting stiff collars and even stiffer upper lips, but all of the staff without exception were so friendly and personable they were a big part of why the experience was so enjoyable.

The days of hushed dining rooms where you can hear the clatter of cutlery on plates are thankfully over, in London at least, and it was refreshing to see such conviviality and personality in such a rarefied realm.