Fine wine has surpassed classic cars, art and jewellery to become the world’s best performing collectible, with values soaring 25 percent over the past 12 months, as buying picks up among wealthy Chinese. 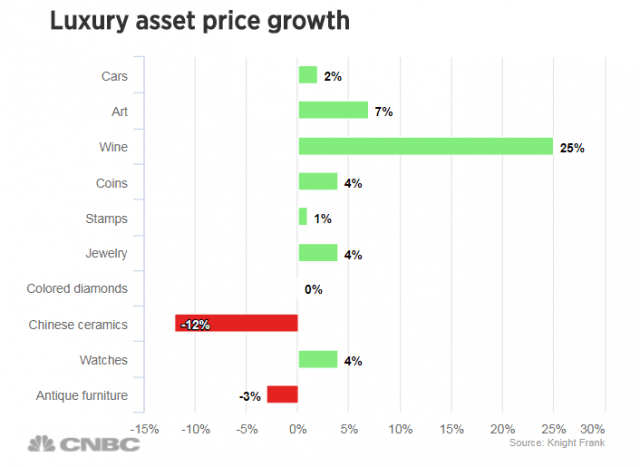 According to the latest report by The Knight Frank Luxury Investment Index that tracks the price growth in the major categories of collectibles, collectible wine prices have increased 25% over the past year, and are up by 61% over the past five years, ahead of classic cars, art, coins, stamps, jewellery, watches, coloured diamonds, Chinese ceramics and antique furniture.

The jump seen in the wine category came at a time when the Chinese economy has gradually come to stabilise, following its bullish boom that was stopped when the country launched a sweeping anti-corruption drive that dampened fine wine purchases.

Buyers from the US, Europe and other parts of Asia also contributed to the sector’s impressive growth, the report said, with Bordeaux, Burgundy and northern Italian wines being the most sought-after items, reported CNBC, citing the report.

“After the crisis, the Chinese buyers were buying high-value wines not because they liked them, but because they perceived those wines to be the ones to buy,” he explained, “We saw that bubble pop. Now the Chinese wine buyers are more connoisseurs.”

The Chicago-based Hart Davis Hart, the biggest fine wine auctioneer in the US, said it has sold every single one of the 8,322 lots that have come up for sale so far this year, for a total of US$24 million. In addition, HDH has made a further US$3.5m through its online wine sales.