Although the Roman worldview was that wine meant civilisation, in the far-flung north of their empire it was beer that sustained the soldiers keeping the barbarians in check.

Late last month at the Roman fort of Vindolanda in Northumberland, archaeologists uncovered a collection of 25 tablets, each with a handwritten note from a long-forgotten person who once lived at the northernmost edge of the Roman world.

About the size and thickness of a modern postcard but made of wood, the tablets have been kept perfectly preserved in the waterlogged and anaerobic earth where they have lain since the turn of the 1st and 2nd centuries AD.

They are the first tablets to be discovered at Vindolanda since 1992.

The tablets are so perfectly preserved that they are still legible and although scholars are now reading over the notes to see what clues to life on the frontier they contain, it has already been noted that at least one of the screeds was written by a cavalry officer whose handiwork appeared on one of the tablets discovered in 1992. Famously, his previous letter included an appeal to his commander to, ‘send beer!’

Before the most recent discovery, excavations at the fort in the 1970s, ’80s and ’90s rocked the archaeological world when a hoard of similar tablets, over 800 in total, were uncovered at the site (the majority in 1992). They have been hailed as the most important archaeological find ever in the UK and while not the oldest written Roman letters ever found in Britain they are much more informal.

As such the tablets provide a uniquely personal view into the daily life of the garrison and include both military and personal correspondence.

As well as orders, reconnaissance reports and supply issues for the fort’s officers, there are references to underwear (answering an age-old question), requests for socks (and another), the derisive term by which the Romans (and their Gaulish auxiliaries) referred to the Britons (‘Brittunculi’ or ‘little Britons’) and complaints about the state of the roads.

Tablet 291 is often cited as it is from Claudia Severa, the wife of an officer called Aelius Brocchus, to Sulpicia Lepidina, the wife of the fort’s commanding officer, the prefect Flavius Cerialis.

Claudia is inviting Sulpicia to her birthday party on 11 September.

As a defensive structure, Vindolanda guarded the road between the river Tyne and the Solway Firth.

The fort was first built in around AD 85 and aside from two abandonments during the third century, stayed in use until the late fourth century when the Romans left Britain for good.

The majority of the tablets date to cAD 100 when the garrison was the 9th Cohort of Batavians, a mixed cavalry-infantry unit of about 1,000 men originally from an area analogous to the Netherlands. So while we might refer to them as ‘Romans’ – and indeed soldiers who completed their careers were eligible for citizenship – they were not ‘proper’ Romans but, effectively, Gauls now in Roman service with a smattering of true Roman officers leading them; much like the way the British Indian army was run.

Although the fort was linked to the defences of Hadrian’s Wall which is slightly further north, the tablets in question in fact pre-date the wall which was not built until AD 122.

One of the most well-known letters is from the above mentioned cavalry officer, a Decurion called Masculus.

The note was written while Masculus was leading a patrol, perhaps to a smaller outpost along the road or towards the frontier; checking for incursions by hostile Britons no doubt.

Writing to Prefect Cerialis he is confirming his orders as to whether the whole or part of his command is to meet “at the crossroads”.

He adds a postscript however that, “I ask you order beer, which the soldiers don’t have, to be sent.” His thirsty men, it would appear, had drunk their ration rather too quickly.

The most recently discovered tablet bearing Masculus’s name looks as though he is asking for leave (‘commeatus’), possibly after his long patrol.

The request for beer is an interesting one and points to the supply arrangements the Roman army clearly had in place for its troops and garrisons.

Speaking to the drinks business, The Vindolanda Trust’s Sonya Galloway explained that quite a lot is known about the diet of the troops at the fort and quite a few beer and wine related artefacts have been uncovered 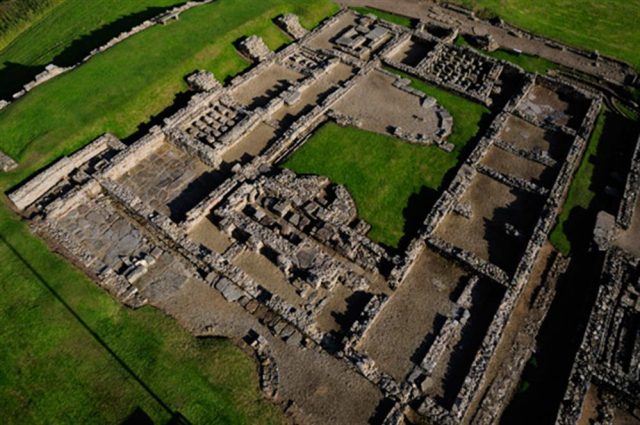 These include partial evidence of beer barrels which must have ranged from 77-300 gallons in capacity, pointing to a substantial brewery at the post.

References to brewers and maltsters are also common and in fact the earliest known brewer to be based in north Britain is a man called Atrectus, who was a Tungrian – from an area in modern Belgium – and who was most likely attached to the 1st Cohort of Tungrians who built the fort but he may have been with the 9th Batavians.

Archaeologists have also found little wooden staves from what were probably drinking vessels. Rather large for one person it is thought they would have been passed around communally, between messmates in all likelihood.

It is clear, therefore, as Galloway explains that: “Beer and the provision of it was a vital aspect of life at the base. The brewer was an important member of the community, someone of influence who had to manage a large supply and demand chain and a lot of customers.

“Apart from the tavern outside the walls of the fort we would also expect beer to be consumed in the home, for festivals and parties and religious events, but also in the officers mess or schola,” she said.

What’s also interesting is the common references to beer over wine at Vindolanda.

That’s not to say wine wasn’t part of garrison life. Wine artefacts such as amphora have been found at the site and wine is mentioned a lot in the accounts, especially for Cerialis, but beer seems to take a very prominent place in the records, far more than one would expect the closer one got to Rome’s Mediterranean heartland.

One reason for this might be the origin of the troops in question. Although auxiliary troops were issued wine when serving alongside regular ‘Roman’ legionaries, when in more static border roles it might have been more convenient to provide them with beer.

As already mentioned, many of the troops stationed at Vindolanda were from the Low Countries and would have been more accustomed to drinking beer rather than wine. Furthermore, in her more northern colonies, viticulture never really took off within the Roman Empire.

Shipping wine from southern Gaul or Italy up to somewhere as far-flung as Vindolanda would not only be expensive on a large scale but the degree of spoilage was probably very high.

It’s a minor point, but when these letters were written, the empire had only recently witnessed the emperor Domitian’s edict of AD 92 which banned any further planting of vines in Roman territory and even called for any vineyards outside Italy to be grubbed up. There’s little evidence this happened, however, and volumes may not have declined very much as a result.

Nonetheless, it stands to reason that brewing on site not only provided a ready and regular flow of beer for the soldiers in sufficient quantities, but was also a supply which would stay fresher for longer and provide more nutritional value.

Who knows, though? Maybe the whole history of winemaking in the UK is about to be turned on its head by reference to vineyards along the Tyne.

We shall have to wait and see.

For more information on Vindolanda and the trust and museum attached to it, click here.