The first written elements of the Bible may be much older than previously thought, some scholars now think, thanks to new studies based on detailed wine and food rations for soldiers in ancient Judah. 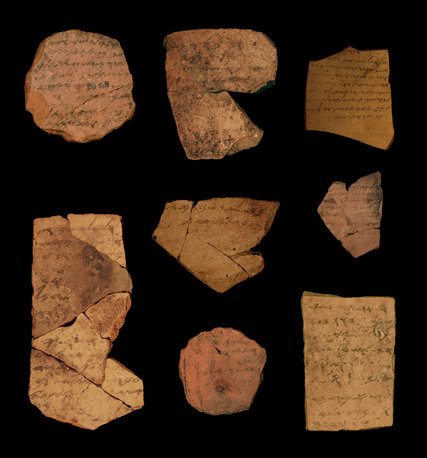 Several shards of pottery – referred to as ‘ostracons’ – bearing inscriptions in ancient Hebrew dating to 600BC have made some historians and theologians think again on how widespread literacy was in ancient Israel and to wonder if the first parts of the Bible were perhaps already written down before the destruction of Jerusalem by the Babylonians in 587BC.

Translations show the inscriptions include orders given to a Judean garrison quartermaster called Eliashib ordering him to dispense wine, flour and oil to his troops, to a more senior commander detailing troop movements and even scribblings from a simple soldier.

“To Eliashib: And now, give the Kittiyim three baths of wine, and write the name of the day,” reads one, “and a full homer of wine, bring tomorrow; don’t be late. And if there is vinegar, give it to them,” goes another; the ostracon with the reference to ‘kittiyim‘ suggesting the soldiers in question were Greeks*, probably mercenaries.

The finds were first uncovered at the small fort at Arad near the southern end of the Dead Sea in the 1970s but have only recently been subjected to new tests to determine if they were all written by one person or many.

A team from the University of Tel Aviv published its findings in the ‘Proceedings of the National Academy of Sciences‘ on Monday this week. Using computer software to compare and contrast the writing on the various ostracons the researchers have concluded that at least six different people had a hand in writing the various orders and reminisces – all in a very short space of time.

The fort itself, situated on the the frontline between the Kingdom of Judah and the neighbouring Kingdom of Edom, was very small and was probably garrisoned by around 30 men. The researchers say that the writing shows a degree of literacy right across the chain of command that was previously unthought of.

Extrapolating this literacy rate across the population of the ancient Kingdom of Judah at this time, estimated to be roughly 100,000 people, the researchers claim that many hundreds of people from all walks of life would have been literate. Enough people in fact to form a pool of scribes from which might be drawn the original authors of the Torah/Old Testament.

In what is now a century-old debate, it has previously been argued that there were not enough scribes in ancient Judea at this time to begin compiling a work as extensive as the Bible – principally the five books of Moses, also known as the ‘Pentateuch’, which cover Genesis, Exodus, Leviticus, Numbers and Deuteronomy.

Tradition holds that it was the sack of Jerusalem by the Babylonian king Nebuchadnezzar II (after whom the bottle format is named) in 587BC and the taking of the Jews into exile in Babylon that spurred the rabbis to begin composing the first books of the Bible to remind the Jews of their heritage and covenant with God.

If, however, the new evidence is true then it is possible that scribes were already working on the Pentateuch and even early versions of books from Deuteronomy to II Kings around 13 years before Nebuchadnezzar arrived to destroy Jerusalem.

The destruction of Jerusalem at this time destroyed the original Temple of Solomon and marks the end of the First Temple period. Interestingly, finds from excavations on Temple Mount a few years ago uncovered more shards of pottery showing they were vessels that once contained wine that was served to the builders of the first temple in the 10th century BC.

The findings are of course disputed, with Professor Edward Greenstein of Bar-Ilam University arguing that even if work on the Torah began earlier than originally thought, the complex and drawn-out process of its composition did not mean it was being read as a standard Jewish text any earlier than previously thought.

Wine lovers though will no doubt be intrigued by the references to “baths” and “homers” of wine – how much do they refer to?

*Kition was the Hebrew name for a city in southern Cyprus which is now modern Larnaca.

Update: ‘bath’ and ‘homer’ are ancient Talmudic measurements. There seems to be no exact consensus on exactly how much liquid they referred to but, broadly, a bath was the equivalent of around 22-24 litres and a homer is the equivalent of 10 baths so 220-240 litres.