History is soaked with leaders and politicians who loved more than a little dose of booze, from Winston Churchill to Joseph Stalin. dbHK takes a look at two Chinese state leaders who were fond of a drop or two.

US president Thomas Jefferson was a bona fide wine aficionado. As American ambassador to France, the diplomat’s taste for French wines took hold and he even tried to grow grapes in Virginia, making wines himself after returning to the States. Frank D Roosevelt had his Martini-soaked afternoons and Britain’s Winston Churchill is known for his love of alcohol, in particular Champagne. He was also partial to a drop of whisky and Armenian brandy. Joseph Stalin, a Communist stalwart, who was rumoured to have been given a Vodka-soaked cloth by his father instead of a pacifier, was practically brought up on the bottle. The Russian could apparently drink roughly 30 Vodkas and walk off sober following boozy state dinners.

How do Chinese leaders measure up to these historic heavy drinkers? We have selected two Chinese state leaders who are known for their love for either China’s Baijiu or yellow wine. Zhou Enlai, China’s first premier whose enviable drinking ability lent him the Chinese nickname of “Qian Bei Bu Zui (千杯不醉)” meaning “still sober after a thousand glasses”, while China’s paramount leader Deng Xiaoping, although admitting drinking was one of his biggest vices, slurped booze almost every day at lunch, the kind of health regimen that Keith Richards or Ernest Hemingway would have approved of.

Zhou Enlai, China’s prime minister for more than 26 years since the founding of People’s Republic of China in 1949, is remembered by its people for many things: his suave style, his benevolent demeanour, being the long-reigning right hand man of Mao Zedong and his more open economic policy that alleviated Mao’s devastating Great Leap Forward policy. However, given China’s current curb on drinking at official banquets, not many were reminded of his liquor-quaffing ability that landed him with the apt nickname of “Qian Bei Bu Zui (千杯不醉)” meaning “still sober after a thousand glasses”.

Party rumours reveal that the formidable drinker used to down 25 glasses of Moutai – the fiery, throat-burning Chinese liquor – in one sitting during China’s Long March in the 1930s, when the red armies were passing through Moutai town in Guizhou province in southwestern China. Even during the tumultuous civil war, Moutai was spared of disruption and three of its famous distilleries in Chengyi, Ronghe and Rongxing were preserved, as Zhou issued a directive to protect the “national pride” after winning the gold medal at Panama Pacific International Exposition at the time.

Even during China’s Cultural Revolution from 1966 and 1976 when the national economy came to a virtual halt, preserving Moutai’s quality was considered as a matter a state importance. Zhou, at the time steering the country’s economic plans, insisted that within ten kilometres of the upper stream of the river where Moutai was sourcing its water, any kind of construction of chemical factories should be banned, according to records at Communist Party News website.

However, even for Zhou, who drank like a fish, there are – in written records and confirmed by official news outlets – three occasions where Zhou was completely hammered. The first time was his wedding night when guests were encouraged to get the groom drunk according to Chinese tradition. The second time was prior to the Geneva Conference in Switzerland, when Zhou dropped by Moscow to meet with the then Soviet Union’s premier at the time, Nikita Khrushchev, and that’s where the Moutai swigging revolutionary met his equal.

This is the only record, reported in a communist newspaper, that Zhou was so drunk that he threw up immediately, which led him to submit a self criticism of some sort to the central government. Mao, upon hearing Zhou’s explanation, instead replied that it did not embarrass the country as Zhou was so concerned about, instead if he were competing with Russia for anything, he [Mao] would go for eating Chili instead of alcohol. Mao, Hunan native, was known for chewing chilies during Long March to perk up his spirits.

The last record of Zhou getting drunk was when he met with the People’s Volunteer Armies after the prolonged Korean War. Records say that Zhou virtually drank with every soldier and was eventually “carried off the scene to a room for some rest”. 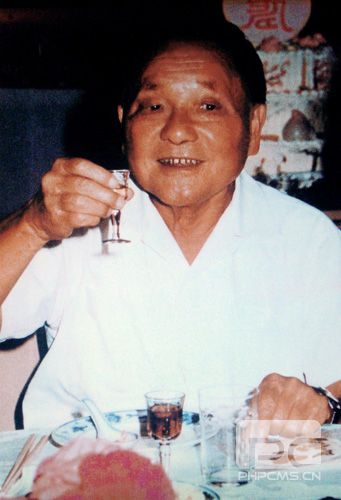 China’s paramount leader Deng Xiaoping’s tolerance for alcohol stands no comparison with Zhou Enlai, but what the Party leader failed in drinking volume, he more than made up for with the faithful practice of years of drinking.

Speaking at a Hong Kong Basic Law Drafting Committee in 1987, Deng Xiaoping like Mao Zedong, a hardened chain-smoking smoker, started to pass out cigarettes to attendees but each one politely declined. Deng then joked, “you are all good people. I have three bad habits: first is smoking, second is drinking and third, the one that is most disagreeable with western style of living is spitting,” referring to the state leader’s habit of keeping a spittoon at hand for spitting during state meetings.

Even during his negotiation with Margaret Thatcher in 1984 on Hong Kong’s return to mainland China, the British government was taken back by Deng’s chain-smoking and loud spitting, leading the British to characterise the meeting as “abrasive” even in the language of diplomacy.

Over the years, Deng’s habit of drinking changed from Baijiu, the Chinese spirit, to ‘yellow wine‘ at his doctor’s advise to switch to lower alcohol content wines, that was, if Deng decided not to give up drinking at all.

Deng was born in Sichuan province in southwestern China, a major producing region of Chinese Baijiu. The translucent liquor was Deng’s favourite and he developed a special liking for a brand called Luzhou Laojiao instead of the better known Moutai. At a commemorative celebration of the brand’s 70th anniversary for winning Panama spirits awards attended by China’s vice premier and other leaders, Deng’s daughter told the distillery’s heads that “Luzhou Laojiao is very aromatic, and my father loves ‘Da Qu Jiu’ the most,” a detail that has been confirmed by Deng’s wife Zhuo Lin, saying the Baijiu brand is the go-to tipple that Deng drinks at every Chinese Spring Festival and holidays and for his birthday.

Later, yellow wine, a liquor that is made from rice, grain or millet, but did not go through distilling, became a favourite of Deng’s as well. Deng’s daughter later confirmed that at the age of 85, Deng’s doctor advised him to quit smoking and lower his alcohol intake. Deng thus traded Baijiu for yellow wine and regularly drank a glass every day, especially one made in Shaoxing, Zhejiang province in eastern China.

In 1990, China’s yellow wine master A Niu (阿牛) and his protégé received an order from Zhejiang provincial government to bottle 20 cases of Shaoxing yellow wine and send them to Beijing for key Chinese leaders. Later they found out that liquor was for Deng Xiaoping, as A Niu wrote in his book, and the next year, they received the same order again.

Deng continued to practice his health regimen: a glass of liquor every day and lived to 93 years.