‘The Finest and Rarest Wines and The Macallan’ collection was sold for than HK$51.1 million (US$6.5 million) this Sunday at Sotheby’s Spring Sale Series, setting a new world record for any lot of whisky ever sold at auction, as well as becoming the third highest value lot ever sold at Sotheby’s Wine. 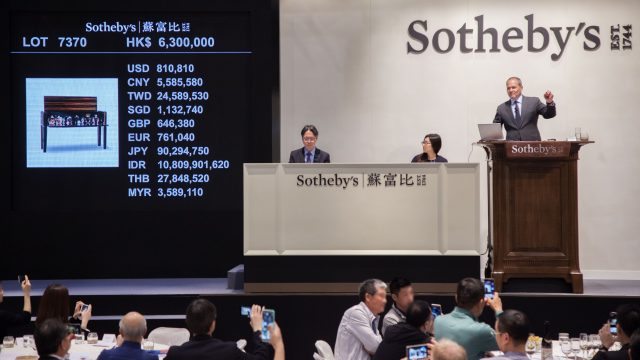 The Macallan in Lalique Legacy Collection, featuring the Six Pillars series which contains The Macallan’s single malts aged from 50 to 65 years housed in a unique cabinet by Lalique, was bought by an undisclosed Asian private collector for more than HK$7.7 million (US$990,000).

Two of the highest lots from the Monumental sale are Vosne Romanee Cros Parantoux 1990 Henri Jayer and Hermitage La Chapelle 1961 Paul Jaboulet Aîné. Each was sold for HK$1.225 million (US$157, 000).

“It has been an honour for Sotheby’s to work with The Macallan and Lalique once again in offering this unique Macallan Collection that combines the exemplary artisanal skills of both houses, to produce this once in a lifetime opportunity to acquire such a rare collectable item,” said Robert Sleigh, senior director at Sotheby’s Asia.

“The enthusiasm of more than ten bidders in the room, online and over the phone demonstrates the importance with which global collectors regard The Macallan in Lalique Legacy Collection and the significance of its direct from the distillery provenance. It is fitting that it achieved a new world record for any lot of whisky ever sold at auction,” he continued.