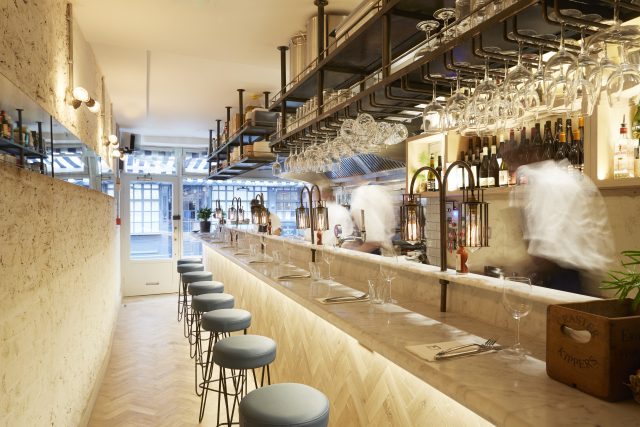 The concept: Having started life as a pop-up at Broadway Market in Hackney, in 2012 founders Alex Hunter and Danny Clancy sought a permanent anchoring from which to serve 100% British, sustainably sourced seafood, settling on the site of a former chippy on Foley Street.

The original site goes big on rustic charm. Decked out in blue and white, its interiors evoke nostalgic memories of idyllic days beside the seaside, bucket and spade in one hand, Mr. Whippy in the other, seagulls circling ominously overhead.

Last December Bonnie Gull opened a sister site in Soho – a tricky time to launch a restaurant selling the dream of being by the sea. With seating for just 23 souls, the dinky site encapsulates everything that’s great about the Soho dining scene. 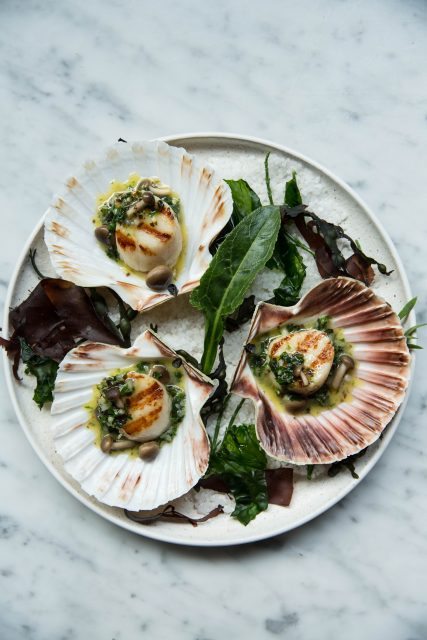 The décor: Like its Levantine neighbour The Palomar down the road, action is centred around a marble bar running the length of the space, which gives diners a front row seat to the theatre unfolding in the open kitchen.

You’re so close to the cooking in fact, that one of my lasting memories of a delightful dinner there the other week is the smell of sizzling butter drifting through the air, which sent my appetite into overdrive.

Contemporary features include filament bulbs in cages dotted along the bar, while retro touches are brought in via old wooden oyster boxes that double as napkin holders.

The food: As it should for a restaurant that prides itself on flappingly fresh fish, executive chef Christian Edwardson’s menu changes on a daily basis depending on what jewels of the ocean have been unearthed from the nets that morning.

To give it its own identity, the majority of dishes on the menu are unique to the Soho site. From mussels cooked over embers to squid on toast with squid ink aioli, the menu is playful and inventive.

A combination I’ve never encountered before was a quirky dish of cod and confit duck swimming in a salt cod brandade in a crazy, creamy take on surf ‘n’ turf. The smoked mackerel paté and pickled cucumber meanwhile, was on point, served with charred hunks of sourdough.

My dish of the night was a humble £5 side of tempura kale and anchovy mayo. Served with a pair of anchovies lying languorously over the crunchy kale, the fat from the feather-light batter paired with the seaweed-like flavour of the kale and the rich fishy depth of the anchovy mayo proved an irresistible combination.

Signature dishes: It’s hard to single out signature dishes as the menu is such a moveable feast, but the chargrilled Dorset cuttlefish with chilli and garlic is unmissable. Dotted with tiny pools of squid ink aioli gleaming like crude oil, the cuttlefish is cooked to perfection, its meaty flesh bearing the smoky char of the grill.

Another must order are the Manx queen scallops with black pudding and apple. An ambitious surf ‘n’ turf combo, I was worried the richness of the black pudding might overpower the delicacy of the scallops but their earthiness worked, the ensemble enlivened by the sour apple purée. 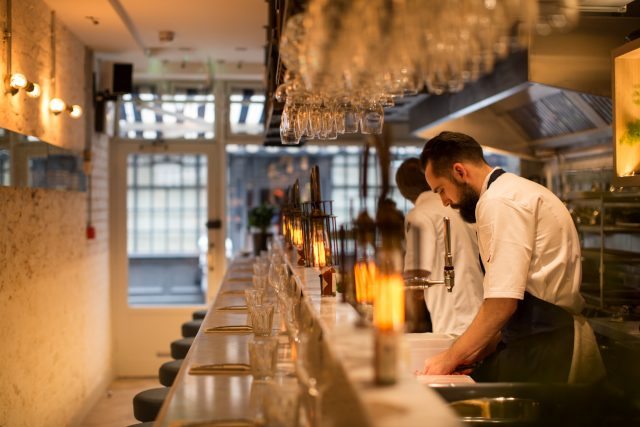 The only dish to leave us deflated was the most expensive on the menu – whole lemon sole with smoked anchovy butter. Priced at £21.50 I was expecting big things, but the small sole looked rather sad on the plate, hiding beneath a silver slick of insanely salty anchovy sauce that obliterated its delicate flavour.

The drinks: The wine list is short and sweet. Focusing on organic and biodynamic drops from Les Caves de Pyrène, Bancroft and Dynamic Vines, all of the wines are available by the glass, which is a rare joy.

I began with a zippy glass of Sicilian Grillo from Il Folle, which had a pleasant salty tang that transported me to a wind-whipped beach. A golden glass of Marsanne from Jeanne Gaillard meanwhile, was rich and exquisitely textured with notes of bruised apple, almonds and bonfire smoke.

Don’t leave without: Asking where you can download the playlist – music is a big part of the Bonnie Gull Soho experience. On our visit we were treated to an aural feast of reggae, soul and funk.

Last word: Bonnie Gull Soho offers a taste of the seaside to sun starved Londoners. Arrive early if you want to nab a powder blue bar stool, as the site doesn’t take reservations. The venue is achingly on trend with its counter concept and sharing plates philosophy, but this adds to rather than takes away from the experience.