Wine & Spirit International’s Dale Sklar looks at the mounting crisis for the Tequila industry as a chronic shortage of Blue Agave plants – which are used to make the spirit – cause huge price increases.

In 2002, aboard a BA flight returning from a week in Mexico, and flying back to LHR with eleven hours to kill, I put pen to paper and wrote an article ‘Tequila in crisis’.
I was unprepared for what happened when it hit the newswires; earning me around 20 radio and two TV interviews within a week of writing. I had no idea then of the press interest in Mexico / Tequila.

Fifteen years later, I went to visit the distillery, La Alteña, in the Tequila highlands where our Tequila Villa Lobos comes from, and now I seem to be writing the same article, except this time, it’s much more serious and far more urgent!

To set the scene: Tequila & Mezcal are two Mexican spirits made from the Agave plant, of which there are hundreds of types, however, under Mexican rules, only the Blue Agave may be used to make Tequila, and therein lies part of the problem. There’s just not enough Blue Agave.

Imagine if of the many hundreds of varieties of tomato, apple, banana , the EU legislated only ONE type was permitted to be called Tomato / Apple / Banana.
That’s exactly what’s happened in Mexico where the CRT (Consejo Regulador Tequila) sets the rules  determining what plant can be used to make Tequila, what states are entitled supply agave, and where it may be distilled, and how it may be made… Interestingly, very recently the Mexican Authorities have invited a Spanish Quality Control organisation to tender and it looks like they will also also be allowed to ‘supervise’ the application of the ‘Tequila rules’, thus breaking the CRT monopoly. This may go down very well in some circles, and not so well in others.

Similarly the CRM (Consejo Regulador Mezcal) makes similar proclamations (normas) to ‘protect’ the status of Mezcal, although many more varieties of agave are permitted than Tequila, which makes good sense and allows extra variation within the category. This may well influence the CRT to consider a wider range of agave allowed to be used to make tequila in the future. There are also strong biological reasons as to why monoculture is a rather risky strategy, but that’s another article …

Over the past 24 months, I heard my Tequila suppliers changing their tune from:

Early 2015: “…the price of agave is so cheap, than unless we need some for distillation, it’s cheaper to let it rot in the fields, than collect it and cook it…”  to
Oct 2016: “…Dale, the price of agave is going up weekly and I’m almost ashamed to be a Tequilero, given what is happening to prices…” to
Nov 2016: “…in 2002 when agave prices last skyrocketed, it went from 40 centavos per kilo to $14 mex peso per kilo in over two years… this time, the price of agave has tripled to $11.4 mex pesos per kilo in just 10 months. The price could easily rise to $20 mex pesos per kilo or even higher, and this crisis could well last at least three years. Take it easy with stocks for new customers of Villa Lobos, as we may well have no stocks of agave to distil.”

In 2002, the huge price increase was due to shortages caused by an increasing demand for agave due to growing world demand for Tequila and insufficient plants + a malady that became known as La Sida del Agave (Agave aids) where apparently healthy plants suddenly withered and died (from an insect, infecting plants with a bacterium / fungus), +  a freak snowstorm which killed off many of these semi-desert plants.
Numerous smaller brands disappeared as no agave at a ‘market price’ was available. Agave plants were raided from fields at night, and some Agaveros resorted to night watchmen (Tequila police), and a new breed of ‘middlemen’ who would hunt down and trade agave at sky high prices, and became known as ‘Coyotes’…
What amplifies these shortages is that unlike grapes, apples, pears and corn, where there is an annual crop, agave takes 7-9 years to grow and mature, so it would take fortune teller to figure out how much agave is going to be required in 8 years time; so feast and famine is virtually guaranteed.
Shortages = price rises = massive planting to take advantage of valuable cash crop = over supply = resultant falling prices = insufficient future planting, and so the cycle goes on…

What has changed this time is a new factor … roughly 1Ž2 the agave crop is being taken by a new player: the producers of ‘Miel de Agave’, who process the agave to make a kind of honey. The sweet juice smells and tastes just like bees’ honey, although it’s probably far healthier as not only is it the highest naturally occurring Fructose (fruit sugar) in any plant, but also it claims a much lower glycemic index, making it especially interesting to health conscious consumers, diabetics, and food manufacturers who want to be able to print all the buy points on their packaging … No added sugar, organic, kosher, halal, vegetarian etc etc.
This new component of the agave market was underestimated and not taken into account 8 years ago, when todays ripe agave was planted = sudden shortages.

To make it even more awkward and costly for the distilleries, shortage of ripe agave to buy and rocketing prices, agaveros are cutting down the small partially-ripe 4 year old plants which contain far lower fructose yields.
The standard formula used to be 6 kilos of ripe agave makes 1 litre of 100% agave tequila … it now can take up to 10 kilos to make the same spirit, and at triple the cost per kilo. Hence, we have to increase the export price of Villa Lobos Tequila by 14% … in the Mexican domestic market, 100% agave Tequila prices are increasing around 20%.

Prognosis: over the next three years given there will be very little agave left, much having been cut down at half the normal lifecycle, the bigger distilleries will struggle on, paying whatever they have to, in order to keep their ‘famous brands’ available and in stock, but refusing to release liquid to make the numerous small private label brands (maquila), and many labels will disappear from the shelves.
The world’s biggest and most famous Tequila brands are mainly non-100% agave (mixto), and so less susceptible to these problems.
Some more famous high-end 100% agave brands may ‘give in’ and try to retain consumer appeal and sales volumes by switching from 100% Agave classification to ‘mixto’, which uses only 1Ž2 the amount of Blue agave, and the rest of the spirit is distilled from sugars obtained from other much cheaper non-agave sources, such as beet, sugar cane, sweet potato etc.

The agaveros are making a quick killing right now, but once the stock is sold … it’s gone; and not everyone wants to re-plant and wait 8 years for the next crop, at an uncertain price.
The big brands will not find it easy managing these price increases, but will certainly enjoy the spectacle of numerous vanishing ‘private labels’ and on-shelf competition.
The miel de agave producers which bear much of the responsibility for this situation, unlike Tequila, have the flexibility to use other materials other then just ‘blue agave’ and that is what they are doing. 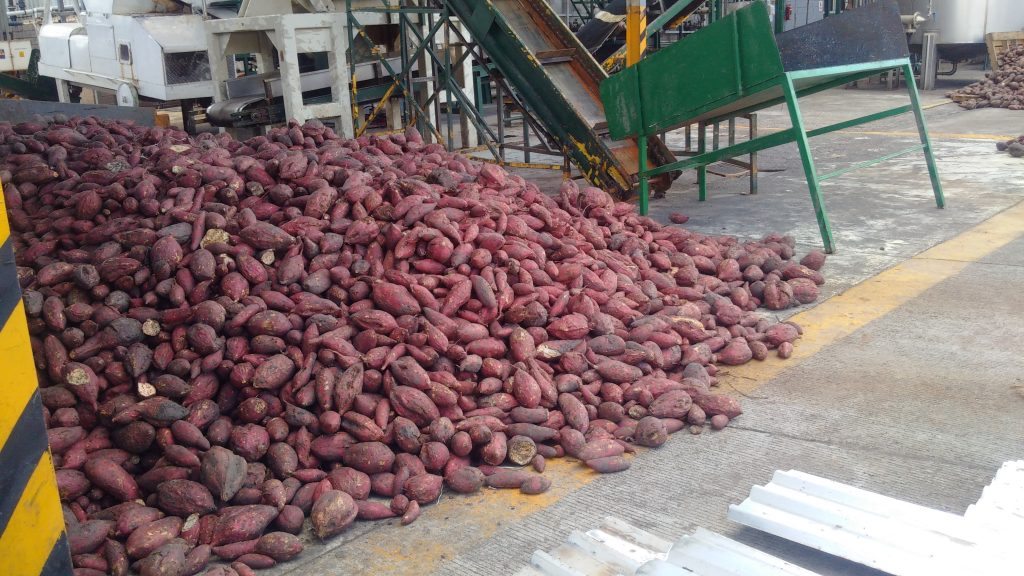 They are experimenting with many other agave types, as well as other sugar sources… pictured, left, are sweet potatoes at the honey production plant.
The alternatives, if used by the honey producers, will have a dramatic effect on availability and prices of blue agave, and hence, Tequila prices.

Mezcal spirit has suddenly come into vogue, sparked by enthusiastic bartenders, and this new passion for mezcal couldn’t have come at a worse time for them. They may have a much wider choice of agave than the Tequileros, but any agave growing is fair game, and being uprooted from roadside verges and mountain sides…

However, the 8-25 years life cycle (depending on the variety of mezcal) is the one non-variable and can’t be rushed.

Consumers whether in Mexico, USA or elsewhere will undoubtedly switch some of their buying to cheaper ‘mixto’ tequila options, and switch spirits to rum, brandy, & whisky, and THAT is what will eventually bring prices down; when no-one wants to pay the market price.
It will happen … it always does, but until then … sera muy muy interresante! (it’s gonna’ be interesting!)

Dale Sklar is the founder of Wine & Spirit International, a business he continues to expand globally with a focus on Europe, South America and the USA. Dale is heavily involved in new product development, innovation and sourcing new products. A recognised authority on Tequila and Absinthe, Dale is often invited as a guest judge with some of the leading spirits publishers.