Aldi is determined to sate the UK’s thirst for Prosecco 24/7, with the launch of a new Prosecco flavoured teabag. 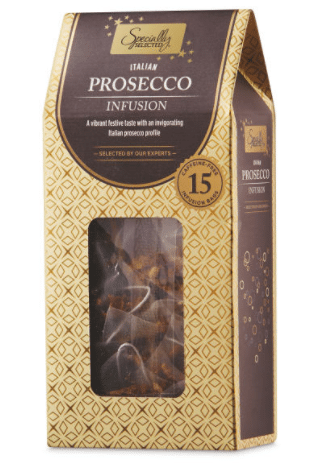 The caffeine-free infusion, which retails for £1.89 for a pack of 15 teabags, is presented as “a vibrant festive taste with an invigorating prosecco profile” – and is part of a range that includes a mulled wine and spiced chai infusion, under its Specially Selected label.

The Italian fizz inspired tisane has proved so popular since launching on Thursday that it has already sold out online and is only available in store.

The discounter is also selling a £12.99 magnum of the Italian sparkler from Lucci in store, as well as the commemorative Union Jack-clad bottle of  Veuve Monsigny Champagne Brut (RRP: £9.99) launched last week in honour of its sponsorship of Team GB. This sponsorship saw it supply wine to the Team GB Ball in Battersea on Wednesday, which was attended by the UK athletes who took part in Rio 2016 and former medallist. Aldi has since announced it will be extending the sponsorship to Tokyo in 2020

As part of its pre-Christmas marketing, the retailer has beefed up its online wine site for Christmas, highlighting its second collaboration with wine critic Olly Smith, whose Christmas wine guide with reviews and wine pairings feature across Aldi’s marketing material both online and in-store. It is also promoting its range of Christmas hampers which launched last month.

In October, the discounter released a new tranche of wines in its £9.99 Lot Series along with its craft beer-style wine bottles, while also unveiling a new focus on gifting.

Buying director Mike James told db Aldi’s volume sales of wine stands at about 90m bottles, with beers, wine and spirits sales growing 6.5% in the first half of the year.

2016 has been a busy year for the discounter, which launched its hotly-anticipated online wine-by-the-case operation in January, supported by a three-day pop-up wine shop in East London as part of its sponsorship of London Wine Week in May to boost its visibility across London and the South East. In addition to its Team GB sponsorship, it boosted its credibility by sponsoring ITV’s The Wine Show over the summer, and was named Innovator of the year at the IWSC Awards 2016 last month.