Aldi’s ‘craft beer-style’ wine range has been positively received by the industry, but will it be a game-changer? 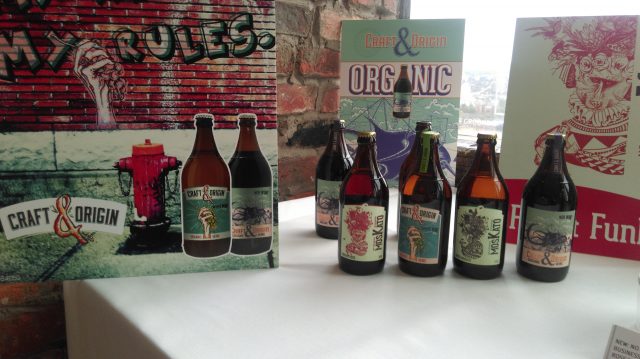 This week the discounter unveiled its new 50cl ‘craft’ beer style wines at is autumn tasting, which are designed to appeal to the millenial consumer. The wines, which eschew grape varietals and the traditional cues on their distinctive labels, were created in partnership with South African specialist Origin Wines, who supply some of Aldi’s entry level and South African wines, and have been a year in the making.

The launch trade seems enthusiastic about the innovative new packaging and concept, which is a deliberate move by Aldi and producer Origin Wines to turn the traditional concept of wine packaging and marketing on its head – but others have been more doubtful about the wine in the bottle.

James said that while he had “no idea” how the bottles would be received when they go in store in mid-November, the discounter had ordered a “hefty minimum order” to see them through the busy Christmas period, and was keen to “keep them going” after the first shipment.

“We will take learnings from this, so we could try a different style of wine, or label in future,” he said.

At the tasting on Monday, Mike James told db it had wanted to rip up the rules on wine and deconstruct how wine is sold – and highlighted the need for the wine trade to think differently and embrace change.

“I was bored hearing that the wine industry is in decline so I thought we’d take knowledge from gins and beers – let’s deconstruct what is normal about wine” he said. “So it’s not 75ml, it’s not screw-cap or cork, the back label isn’t about aromatics or what food it goes with, the front label isn’t traditional, but it has taken the cues from craft beer.”

“The wine industry is in declined because our traditional buyers are dying out and not being replaced by younger consumers, who are buying craft beers, gins and fruit-flavoured ciders,” James explained. “It is incumbent on use to attract them back to the BWS fixture, fruit fusion wines might be another way.”

“We’ve got to try something so we’re topping up customer [numbers and wine drinkers] as other leave us,” he added.

James’s link between the new range and fruit-fusion drinks is an interesting one, particularly given the more obvious craft beer connection, but the sweet and fruity like-it-or-loathe-it fusion drinks – which have divided opinion among critics – have shown incredible appeal among consumers, growing into a £100m category,  a rise of 290% during 2015 according to Kantar Worldpanel (52 w/e data to 31st January 2016).

Origin Wine Bernard Fontannez described the lines as “disruptive and in tune with millennials” and the company said it was good to see some of positive feedback on its “boundary-pushing” move.

Industry specialist Robert Joseph tweeted that the brand was “leveraging craft coolness” rather than emulating craft beer per se, and that any move to break the “wine packaging taboos” got his vote.

Robin Copestick of Copestick Murray applauded the Aldi team for having the courage to launch something different into the market. “As an industry we need more innovation, particularly at a quality level. It is not for want of trying and it is often the gate-keepers in the UK that make wine so conservative and price sensitive,” he told db. “We have a younger generation of consumers who want to be excited, have dispensable income and want to spend it on quality products. At the moment craft spirits and beers and grabbing their attention and wine is way too safe and lacking imagination.”

Copestick Murray is planning to launch npd, and Copestick said he hoped buyers would be willing to be brave and take a chance. ”It looks like it is Origin and Copestick Murray are leading the way on product innovation and hopefully, over the next few years, we can create a real buzz with the consumers,” he said.

Wine critics Charles Metcalf and Fiona Becket also gave the concept the thumbs up, with Becket tweeting that she had recently lamented that supermarkets did not promote craft wines. However The Telegraphs’s Victoria Moore said Aldi’s “claim to be presenting the first ‘craft wines’ to a younger audience “don’t ring true“, adding that  the “packaging was the best thing about them”.

Tim Wilson of the Wilson’s Drinks Report agreed. “Craft beer is all about quality and provenance – these wines would seem to fall short on both counts”, he said.