An ancient scroll containing an order for wine also includes the earliest written reference to Jerusalem say archaeologists – but not all agree. 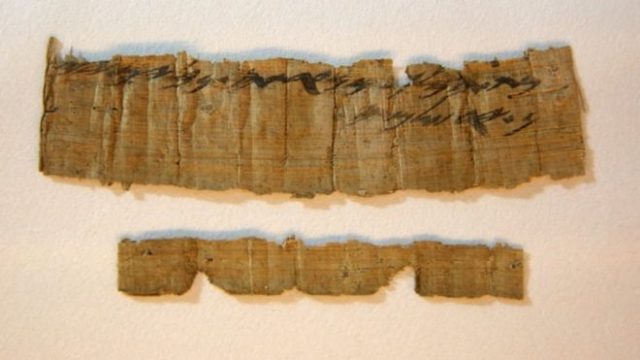 The Israeli Antiquities Authority (IAA) recovered the small strip of papyrus four years ago from “thieves”, who had apparently removed it from a cave near the Dead Sea. Tampering with ancient artifacts and archaeological sites is a crime in Israel.

The scroll, which archaeologists have carbon-dated to the 7th century BC, bears just two lines in Hebrew which read: “From the king’s maidservant, from Na’arat [in the Jordan Valley], jars of wine, to Jerusalem.”*

Dr Etian Klein, deputy director of the IAA’s Unit for the prevention of Antiquities Robbery, has said the document, “represents extremely rare evidence of the existence of an organised administration in the Kingdom of Judah.”

It is also the earliest reference to Jerusalem yet found outside of the pages of the Bible said the IAA and is an early indication of the role women played in the court life of ancient Israel. It is after all the King’s maidservant who is placing the order for the wine.

“It underscores the centrality of Jerusalem as the economic capital of the kingdom in the second half of the seventh century BC,” added Klein. As he continued, correlating the date of the document with what is written in the Bible means that the wine was likely destined for the court of one of three kings: Menashe, Amon or Josiah but it was impossible to say which.

It is not the first historically important document found in Israel in which wine is mentioned. This April shards of pottery from 600BC were found bearing inscriptions in Hebrew, many of them with orders for wine for men stationed in garrison forts. Analysis of the handwriting has led some scholars to believe that the literacy rate of the Kingdom of Judah was much higher than originally thought and thus, it was possible, work on the first books of the Bible might have begun before the destruction of Jerusalem by Nebuchadnezzar II in 587BC and not afterwards when the Jews were in exile in Babylon as is often accepted.

Unfortunately, in the politically charged world of the Middle East, the scroll has already become a prop in the on-going debate about who has the longest claim to the holy city.

The findings surrounding the document were released this Wednesday at the same time that Unesco adopted a resolution that Israel has claimed denies Judaism’s ties to Jerusalem.

The Unesco resolution apparently only mentions the Islamic name for the most important holy site in the country, Temple Mount, which Muslims call al-Haram al-Sharif.

It is telling that in the statement released by the IAA Israel’s Minister of Culture, MK Miri Regev, said: “The discovery of the papyrus on which the name of our capital Jerusalem is written is further tangible evidence that Jerusalem was and will remain the eternal capital of the Jewish people. It is our duty to take care of the plundering of antiquities that occurs in the Judean Desert, and no less important than this is exposing the deceit of false propaganda as is once again happening today in Unesco. The Temple Mount, the very heart of Jerusalem and Israel, will remain the holiest place for the Jewish people, even if Unesco ratifies the false and unfortunate decision another ten times”.

Meanwhile, other Israeli professors have also cast doubt on the provenance of the scroll itself.

According to Israeli newspaper Haaretz, professor Aren Maeir of Bar-Ilan University has criticised the IAA for releasing material it was clear “in advance… would be controversial”.

He added that as the scroll was not found during an excavation how could the IAA be sure it was not a fake designed for the antiquarian black market?

He dismissed the carbon dating, which the IAA said made the scroll 2,500-2,800 years old, saying it was possible to obtain ancient papyrus and that it did not mean the writing on it was as old as the material.

“In my humble opinion, the need for additional tests is glaring, especially if a government agency is publishing this and giving it a seal of approval. Why wait for the arguments and only then do the additional tests? They should have done them first,” he argued.

Professor (Emeritus) Shmuel Ahituv defended the scroll’s legitimacy, however, pointing out that it was extremely fragile and was found rolled up; a delicate and fiddly action for a forger to risk.

He also said that not only was the form of Hebrew used correct for the First Temple Period but the words “Na’arat” and “Yerushalima” were extremely rare and unlikely to be used even by a forger with excellent knowledge of the Bible.

Finally, he argued that the very banality of the subject matter, its mundaneness, made it unlikely to be a fake.

“If I were a forger, I’d choose a more impressive text,” he said.