The miner-turned-designer, Ashley Sutton has opened his third venture in Hong Kong, following the success of his other-worldly bars of Ophelia and J. Boroski. 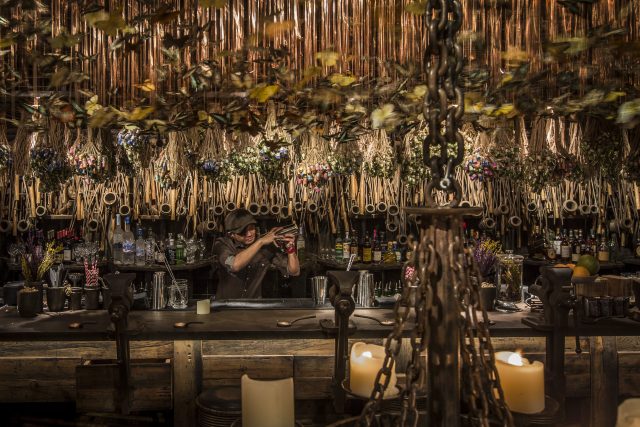 Known for his outlandish interior design and hidden away locations, Ashley Sutton has transformed an uninspiring patch of Hollywood Road into a subterranean bar decorated with 10,000 preserved butterflies which are suspended from the ceiling on gossamer and miniature cast iron fairies which are dotted about the dark iron and leather clad interior.

Taking cues from his children’s books, the former iron ore miner hailing from Freemantle, Western Australia has designed Iron Fairies to resemble an ironsmith’s workshop complete with six private dining spots which have been built to resemble iron furnaces.

Iron Fairies follows on from Sutton’s other Hong Kong projects: Ophelia which resembles a cross between an opium den and Moulin Rouge and J. Boroski, an invite-only no menu bar just round the corner from Iron Fairies and helmed by the man himself, Joseph Boroski.

Illuminated by candles and iron chandeliers, the space comprises low-rise tables adorned with iron fairies and accommodates 80 guests. The menu is headed up by chef Todd Williams and the drinks list is heavy on the cocktails with craft beers and Australian wines.

Unusually for a Hong Kong bar, there will also be an ever-changing roster of jazz and blues acts, making Iron Fairies an upscale creative addition to Hong Kong’s late night bar scene.