Today is the feast day of Arnulf of Metz, a patron saint of brewers whose beer cup, according to legend, really did run over. 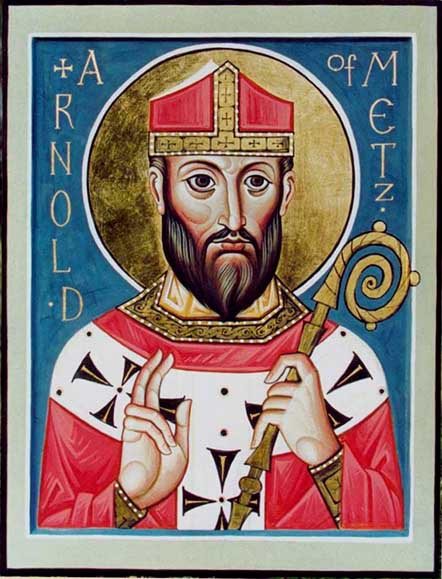 Born in Lorraine in around 580 AD, Arnulf was part of an important family who served the Merovingian Frankish kings of Austrasia.

Like fellow ‘beer saint’ Arnold of Soissons, Arnulf only devoted himself to God later in life first serving as a military commander and then a high ranking and powerful politician at the court of Theudebert II.

He married a noblewoman called Dode and had at least two sons. The eldest, Chlodulf, would follow in his father’s footsteps as bishop of Metz and the second son, Ansegisel, through his marriage to Begga (also later canonised) fathered the dynasty which would eventually become the Carolingians.

Arnulf was also closely tied to the reunification of the Frankish kingdoms of Austrasia and Neustria in 613 AD under Chlothar II.

Theudebert II had been at war with his brother Theuderic the king of Burgundy* but had been defeated at the battle of Zülpich in 612 and executed soon after. Theuderic did not reign long as king of Austrasia and Burgundy, dying of dysentery the following year.

Their grandmother, Brunhilda**, now sought to reign as regent for Theuderic’s infant son, Sigebert, but as she had supported Theuderic in the war the Austrasian nobility, including first and foremost Arnulf and his son’s father-in-law, Pepin of Landen, invited Chlothar II of Neustria to take the throne instead.

Brunhilda was overthrown and Chlothar, taking revenge for the murder of his four year-old son on Brunhilda’s command back in 604, ordered her executed by the particularly vicious means of being pulled apart by horses.

Soon afterwards, with his wife having joined a convent, Arnulf became a priest and was made bishop of Metz in 616 AD. There is an indication in his religious life that he was troubled by the part he had played in the political turmoil and violence of the time.

One of the main legends associated with him is that he cast his episcopal ring into the Moselle calling on God to return it to him when he had been forgiven. Many years later a fish brought to his kitchens was cut open and the ring found inside. Arnulf immediately gave up his position as bishop and lived the remainder of his life as a hermit in the Vosges until he died in 640.

His association with brewers dates to the return of his body from Remiremont where had died back to Metz.

It was a hot July day and the party soon found themselves running short of ale with which to quench their first. The group’s leader, Duke Notto, prayed to Arnulf to bring them what they lacked and, to their astonishment, what little remained of their beer multiplied to such quantities that they had enough to last them the remainder of their journey and to toast the re-interment of their saintly bishop in Metz cathedral, with brewers swiftly hailing Arnulf as a patron of their craft.

So the story goes anyway.

*One of the many ‘Burgundies’ that have existed throughout history and the most complex incarnations of which date to this time. This particular one did span the modern départments of Burgundy and Franche-Comté (now joined together as one entity from this year) but its capital was at Orléans.

**A Visigoth princess sometimes thought to have been the inspiration for both Kreimhild and Brunhilda in the Niebelungenlied.