Today is the feast day of Arnold of Soissons, patron saint of hop-pickers and Belgian brewers. 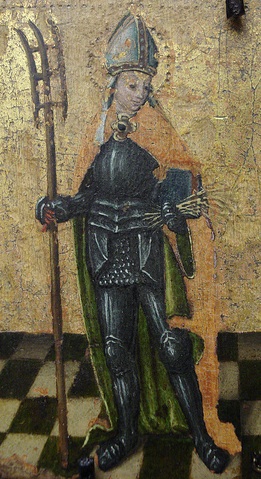 Along with Arnulf of Metz (feast day July 18), Arnold (sometimes Arnulf) of Soissons is perhaps the foremost patron saint of brewers and hop-pickers – but don’t confuse them with each other or Belgium’s other beer saint, also helpfully called Arnold/Arnulf of Oudenaarde.

Born in Brabant in around 1040, Arnold of Soissons was a career soldier in his youth, a not uncommon occupation for many saints – see St Martin of Tours – and served under Henry I of France in various campaigns before entering the Benedictine monastery of St Medard in Soissons.

After spending three years as a hermit he was named abbot in around 1080 – an honour he tried to avoid before divine intervention ultimately forced his hand as his hagiography, in time honoured tradition, relates.

When his see was taken over by another bishop he moved to found the abbey of St Peter in Oudenburg in Flanders.

While there he took to brewing enthusiastically and is said to have realised he could clarify his beer further by passing it through woven baskets, an idea he had while making “skeps” for the monastery’s apiary.

His interest in brewing may even have pre-dated his monastic life, at least one story has him keeping his soldiers refreshed with lots of ale between and even during battles.

Generally not as strong as more modern brews, beer at the time was as essential to daily life as water and often much better for your health.

It wasn’t known at the time but pathogens in the water were killed during the brewing process thereby making it safe to consume.

Oudenburg in the 11th century was located very close to salt marshes, which weren’t reclaimed until 1173. Home to all manner of viruses and pathogens and disease carrying insects, nasty bouts of plague and sickness must have been a common occurrence.

During one particularly virulent outbreak Arnold is said to have encouraged the local populace to steer clear of water altogether and only drink beer, which had the happy effect of saving a great many of them.

Sadly, something in the water must have got him eventually, as he died aged only 47 in 1087. He was canonised in 1121 after a series of miracles were attributed to him both pre and post his death which included (while still alive) praying to God to increase the beer supply of a monastery after part of its roof had collapsed and destroyed the majority of it. The prayer was answered and the supply of beer miraculously restored.

He is often depicted in armour, carrying a mashing rake and sometimes with a bee hive nearby; references to his time as a soldier for both earthly and heavenly powers, his favourite hobby and a source of inspiration.