Scottish craft brewer Brewdog will launch its new spirits arm next month, almost two years after announcing its intention to take on the spirits world.

Plans for Brewdog to diversify with the launch of a spirits division were first revealed in 2014. Named the Lone Wolf Distillery, it will kick off its production with a vodka.

Headed up by Steven Kersley, formerly of Diageo, the division will produce vodka, whiskeys and gins and will be the “only craft distillery in Scotland to make base spirit from grain, under one roof”, according to a blog post on Brewdog’s website.

“This is hugely important to us – and it starts with our Brewdog vodka. We’ve removed a section of our brewhouse roof and installed a colossal 19m high 60-plate rectification column, to get the purest, cleanest spirit possible. This will then form the basis of our vodka and gins, and where others buy in neutral spirit in bulk, we will distil everything from scratch. The head of our distillation team Steven Kersley is now dialling in our gin recipe using the 50 litre pilot still, with over 30 different botanicals for trial, building up the flavour complexity until the blend and ratios are perfect.”

Brewdog has experimented within the spirits world in the past, producing a high strength 38% abv distilled beer last year called Watt Dickie, which was made through a combination of brewing and ice distilling an IPA. The Lone Wolf Distillery will also have “experimentation at its heart”, with its first batches expected to be produced at the start of April.

“With the pilot still we can produce a huge range of potential spirits, and with our epic barrel store we can age and then blend the results to allow a fascinating range of flavours to develop”, it said. 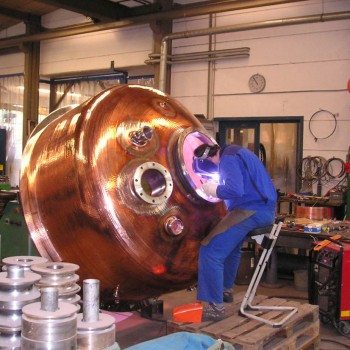 “We want to stretch the boundaries of what a distillery can do – and what a distillery should do. Starting with our own all-grain distilled vodka, through our bespoke gins and whiskies and a range of other spirits besides – we can’t wait to make this natural progression for BrewDog and make as big an impact on the spirits industry as we did on the beer industry.”

The company has opened numerous bars throughout the world since it was founded in 2007 by Martin Dickie and James Watt, with locations in Stockholm, Tokyo, Sao Paulo, Gothenburg and most recently Rome.

Brewdog’s Equity for Punks crowdfunding scheme will now give investors additional spirits benefits. Its Lone Wolf Founders Club will offer those able to invest upward of £5,000 perks including exclusive single-cask whiskies, the chance to design, distil and bottle your own gin and age an entire barrel of Lone Wolf whisky.