Morrisons has spent nearly £10m on remerchandising its BWS fixtures by country, after ditching its innovative Taste Test segmentation. 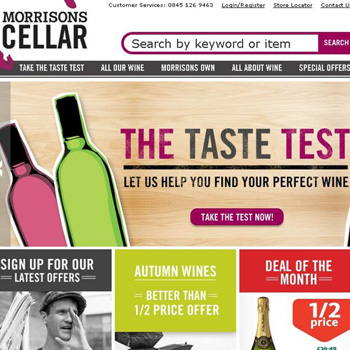 Mark Jarman, senior wine sourcing manager said the retailer had trialed a number of different formats over the last 12-18 months, before deciding to return to colour-blocking by country.

As part of the new look and feel, it has introduced a colour-coded system with word style descriptors, which it says will have “greater meaning” for its consumers and make it easier to navigate the fixture. Shelf edge labels has been entirely rewritten in a language that customers will understand, with words that will have meaning to them, Jarman told the drinks business.

The move followed feedback from customers, according to wine sourcing manager Clive Donaldson. “The key thing for customers is finding wine – best way to navigate by country, the next thing is about style and finding words that resonate and they understand,” he said.

Style formed a “significant” part of the process for consumers, Jarman added and had become an established part of what Morrisons does in store. “But this is more of a navigational tool than we had in the past,” he said.

The Taste test was developed by drinks supplier Bibendum and used by Morrison to divide and merchandise its wines by style on the shop floor. It was launched in May 2012. However although it is not being “actively” used in store anymore, Jarman said it was still a useful tool that the team used behind the scenes to help to define the wines. “There is a lot of science behind it,” he added.

The roll out started in July and is expected to be fully complete across all stores by the beginning of November, marking one of the fastest roll-outs in store the supermarket had seen, Jarman said.

Donaldson said the investment showed the retailers’ support of the BWS category, which had grown over the last three years despite the tough retail market and also notched up significant awards for the team. In May it was named the Retail Buying Team of the Year at the drinks business awards and also won the IWC Supermarket of the Year award in July.

The retailer is also lowered the price of the majority of its entry-level ‘chalkboard’ own label range to £4 and extended its number of craft beers and premium spirits.