The world of wine and art is a comfortable union, with the time and energy spent producing a fine bottle of wine comparable to a work of art. The creation of its label no exception. 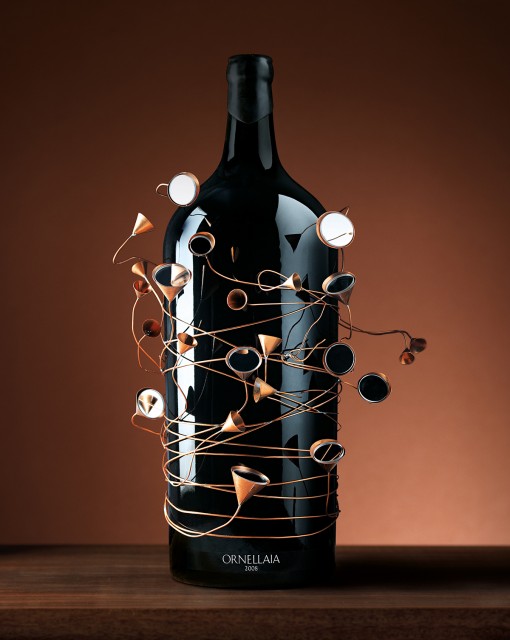 While the liquid inside a bottle is of crucial importance, a wine’s packaging is of near equal importance, helping to communicate a brand’s identity, personality and quality.

With technology and retro labels currently gaining prominence in the world of drinks design, some producers have gone the extra mile, commissioning top artists to design their labels.

Château Mouton Rothschild was an early pioneer of art labels, commissioning artists including Salvador Dali and Andy Warhol every year since 1945 to design its labels, while contemporary artists such as Tracey Emin and Yoko Ono have also lent their talent to the world of wine.

Featuring some truly unique and striking designs, we round up 10 of our favourite wine labels designed by some of the world’s most prominent artists. 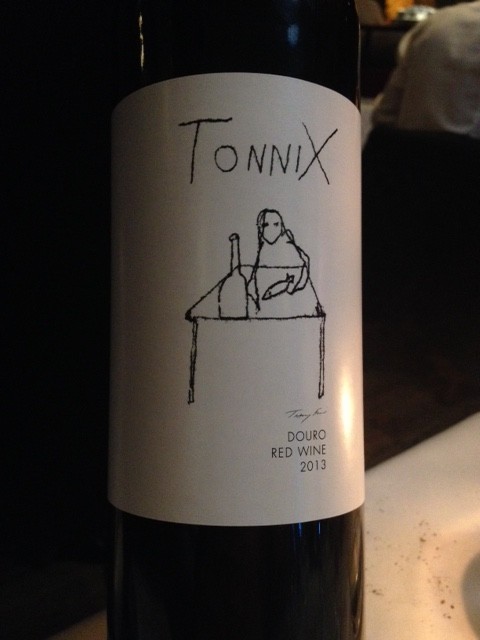 Tracey Emin lent her talents to a range of wine labels as part of a partnership between Quinta de la Rosa in Portugal’s Douro Valley and British restaurateur and chef Mark Hix.

The winery started off by producing a white wine made for seafood in both Hix restaurants and Mitch Tonks’ restaurants, later extending the range to include a red, rosé, port and olive oil, all of which are sold exclusively in both chef’s restaurants. Tracey Emin, who is friends with Mark Hix, designed the labels for the range.

Born in July 1963, Emin is a British artist, perhaps best known her 1998 installation entitled “My Bed”, which comprised of her own unmade dirty bed with used condoms and blood-stained underwear, said to represent a break up. It was nominated for a Turner prize and last year was sold at auction for £2.5 million.

In 1999, Emin had her first solo exhibition in the United States at Lehmann Maupin Gallery, entitled Every Part of Me’s Bleeding. Later that year, she was a Turner Prize nominee and exhibited My Bed – an installation. 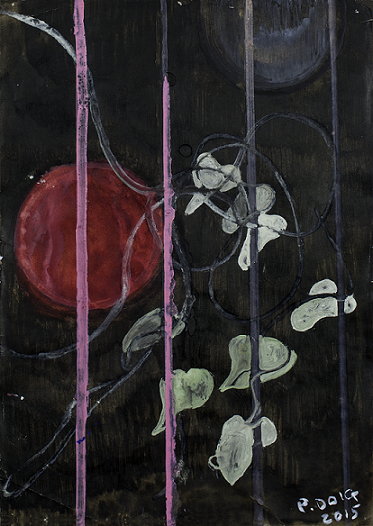 Earlier this year an original artwork for a wine label by Peter Doig sold for £40,000. Originally commissioned for biodynamic wine “Cælestis” produced at Alain Moueix’s estate Château Fonroque in Saint Emilion, all proceeds from the sale went toward the charity WWF to help combat the use of tiger bones in “wine” in Asia.

Peter Doig was commissioned to design a label for the 2011 vintage and donated the original for the auction which was conducted by Drewatts & Bloomsbury Auctions in London. The Scottish-born painter is renowned for his figurative works which have been exhibited at Tate Britain, Dallas Museum of Art and Musée d’Art Moderne de la Ville de Paris among others.

In 2007 his painting White Canoe sold for US$11.3 million, a record at the time for a living European artist.

Taking the concept of a wine label to another level, this 3D bottle was designed German artist Rebecca Horn for the Super Tuscan salmanazar (nine litre) of Ornellaia’s 2008 vintage. The unique bottling features an intricate design of copper wires and was signed personally by Horn. The bottle was commissioned to mark the third year of Tenuta dell’Ornellaia’s Vendemmia d’Artista programme, which sees a prominent artist commissioned to produce a work of art relating to a theme of the vintage. The theme for the 2008 vintage was “Energy”, with Horn contributing a second “kinetic sculpture consisting of copper elements and mirrors” to the winery, which adorns its barrel room. 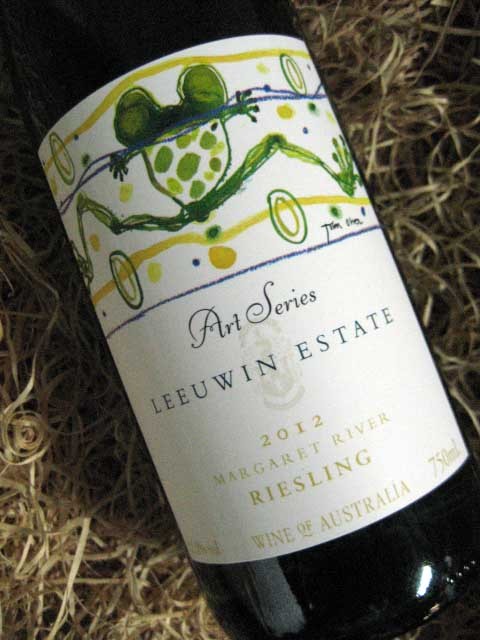 John Olsen was approached to paint the first artwork to be used on the estate’s Art Series Riesling, creating four works entitled “Frogs in Riesling”. They were so loved by the estate that the deision was taken to purchase all four and use it on all future releases of its Riesling vintages.

Releasing its 2013 Riesling vintage this month, Leeuwin’s winemaker Paul Atwood, declared it to be one of its “finest”.

“The 2013 Art Series Riesling has a fine, taut palate that is bursting with Tahitian lime and lemon pith characters”, he said. “Lively and racy acid underpins the palate throughout. Mineral and flint characters make this vintage one of our finest.”

Many of the paintings produced for the Art Series are exhibited in the Leeuwin Estate Art Gallery. 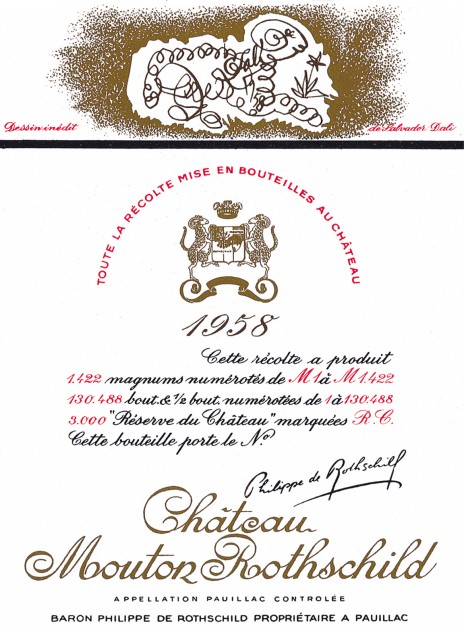 Way ahead of its time, Château Mouton Rothschild has been commissioning top artists to design its labels continuously since 1945, with a one off design in 1924.

The practice of commissioning an artist for each year’s vintage proved a lasting tradition, with every vintage receiving a labels designed by the top artists of the day. In 1958, it was he master of surrealism.

This “charming sheep” was drawn by Salvador Dalí and adorned Mouton’s 1958 vintage. Reflecting on the label, Mouton said is had “all the innocent charm of a drawing by a child”.

Dalì died on the 23 January, 1989 of heart failure at the age of 84. He is buried in the crypt below the stage of his Theatre and Museum in Figueres., across the street from the church of Sant Pere, where he had his baptism, first communion, and funeral, and which is also just three blocks from the house where he was born. 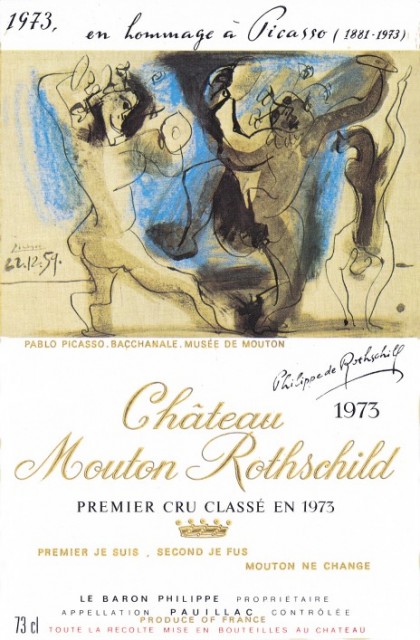 1973 Mouton decided to honour the late Pablo Picasso by publishing one of his artworks on its label shortly after his death. Pablo Picasso was a Spanish painter, sculptor, printmaker, ceramicist, stage designer, poet and playwright who spent most of his adult life in France.

Picasso is considered one of the most influential artists of the 20th century and is known for co-founding the Cubist movement, the invention of constructed sculpture. His most famous works of art include Les Demoiselles d’Avignon (1907), and Guernica (1937), a portrayal of the Bombing of Guernica by the German and Italian airforces during the Spanish Civil War. 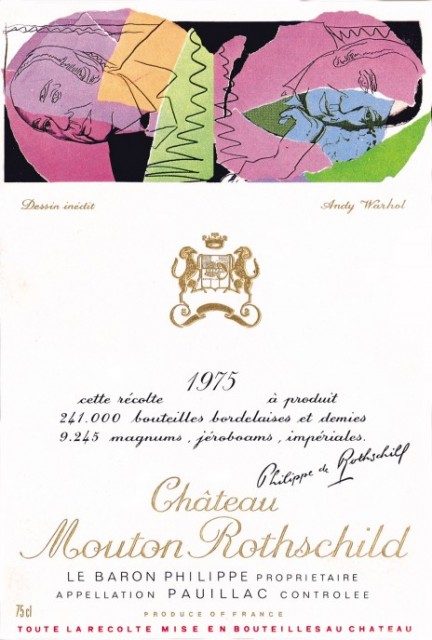 Mouton’s Baron Philippe was given the Andy Warhol treatment in 1975 when he was asked to design that year’s label. Working from photographs, Warhol produced this colourful label juxtaposing different profiles of Baron Philippe.

Born in Philadelphia, Andy Warhol began his career as a commercial artist working at an advertising agency. He went on to become one of the most prolific leaders of the Pop Art movement, which he defined as “the art of making the ordinary original”.

His most famous artworks include a silk screen of Coca Cola bottles and a canvas of Campbell’s Soup and Heinz Tomato Ketchup. 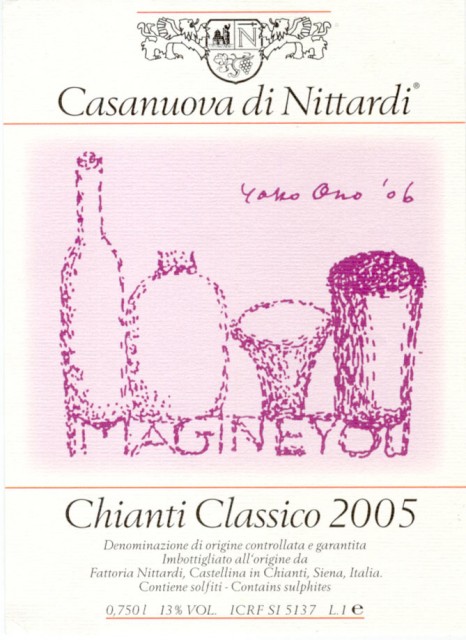 As a tribute to its most celebrated owner, Renaissance artist Michelangelo Buonarroti, Nittardi, a boutique winery in the heart of the Chianti Classico region, has commissioned an international artist every year since 1981 to design the label for its Casanuova di Nittardi Vigna Doghessa.

Yoko Ono is one such artist to have contributed an artwork to the producer, designing this label for the wine’s 2005 vintage.

An icon of the peace movement, together with her former husband John Lennon, Yoko Ono was born 1933 in Tokyo, Japan and is an experimental artist, filmmaker and songwriter. 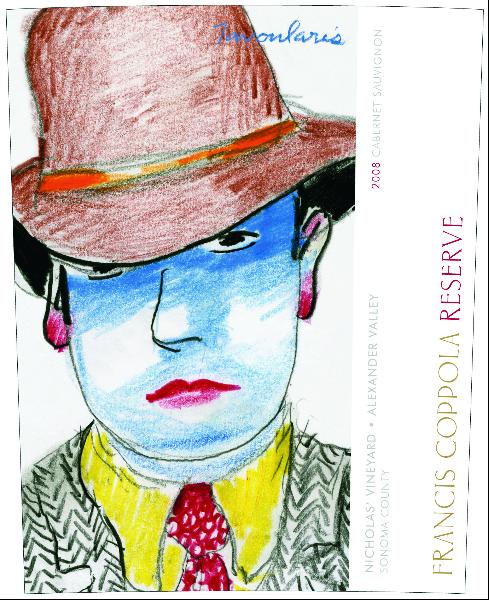 The wines’ artwork is by artist Dean Tavoularis, who first met Coppola while working on The Godfather. Since making the film, both artists have worked on a number of creative projects together, making more than a dozen films.

This is the label from Francis Ford Coppola’s 2008 Cabernet Sauvignon Reserve.

Cult wine producer Sine Qua Non, based out of Santa Barbara in California, is known for its quirky, and often risqué labels, which are all designed by its winemaker Manfred Krankl.

Pencil and charcoal drawings and photography all feature in Krankl’s repertoire, but he is best known for his linoleum and woodcut prints – a hobby he picked up three decades ago after meeting a friend’s woodcutting architect father and a Christmas gift of Japanese carving tools from his wife, Elaine.

Not traditional by any sense of the word, Krankl’s labels have often raised the ire of the Alcohol and Tobacco, Tax and Trade Bureau (TTB). Two of this most risqué labels included, The Hussy, featuring a female sat somewhat provocatively on a chair, and The Good Girl, featuring a nude man resting his head in the lap of a nun, which was rejected by the TTB.

All of Sine Qua Non’s wines are produced using the classic Rhône grape varietals of Syrah, Grenache and Roussanne. Krankl never crafts the same wine twice, with each wine, and vintage, receiving its own unique wine label.

“The 17th Nail in my Cranium” is in reference to an incident involving an empty wine barrel falling on Krankl’s head, leaving a gash that required 16 stitches. He claims the wine is the 17th nail.  The wine has an average selling price of £1,115 per bottle on Wine Searcher.