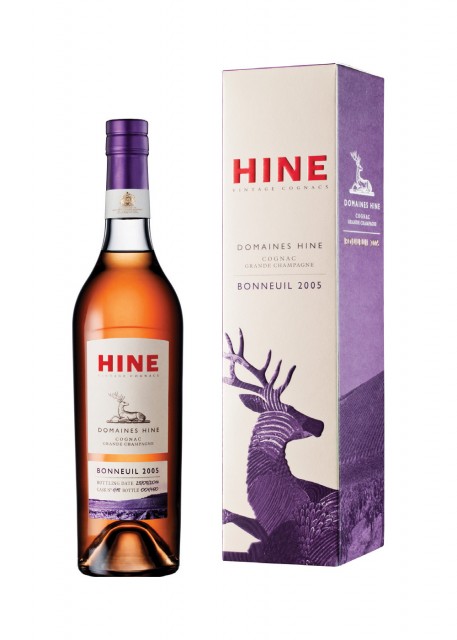 Proving it’s not only the wine industry that places a premium on terroir is Cognac house Thomas Hine & Co, which has added a vintage expression to its range, Domaines Hine Bonneuil 2005.

Just 18 casks yielded 9,000 bottles of the Cognac, which was produced using grapes from Hine’s 70-hectare estate in the village of Bonneuil overlooking the Colinaud valley in the region’s most prestigious, chalk-rich Grande Champagne area. Reporting on the dry, sunny conditions in 2005, Hine drew a comparison with the 1953 growing season, which produced “one of the best vintages of the 20th century.”

The new expression is being offered on allocation in the UK through Berry Bros & Rudd, Master of Malt and The Whisky Exchange via distributor Pol Roger Portfolio. Depending on the quality of the growing season, Hine aims to release further single vintage expressions under the Bonneuil label in future. 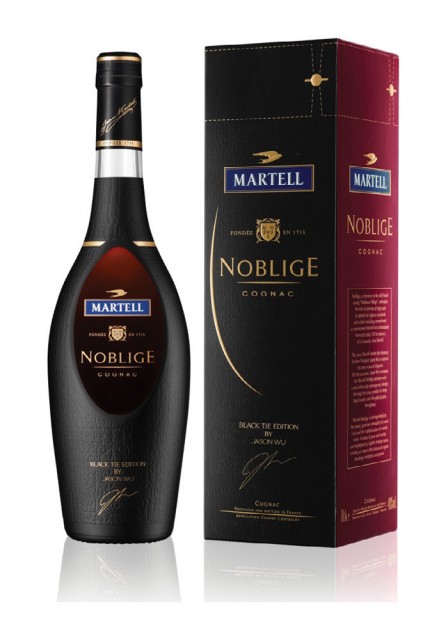 Cognac house Martell has collaborated with fashion designer Jason Wu on a limited edition ‘Black Tie’ design for its Noblige and VSOP expressions. Made of black leather with gold markings, the contemporary bottle reflects Wu’s preference for “simplicity and elegance”, according to brand owner Pernod Ricard. Inspired by the classic dinner jacket, the design is “both timeless and sophisticated”, its makers say.

Before coming up with the creation, Wu visited Martell in search of inspiration. “I was impressed by the architecture and the magnificent history that radiates from it. Every detail, from the furniture to the cellar, is a source of inspiration. Martell clearly shares my obsession for detail,” says Wu. The limited edition, which boasts aromas of “lemon, pear, prune and vanilla pod”, was unveiled in Shanghai. 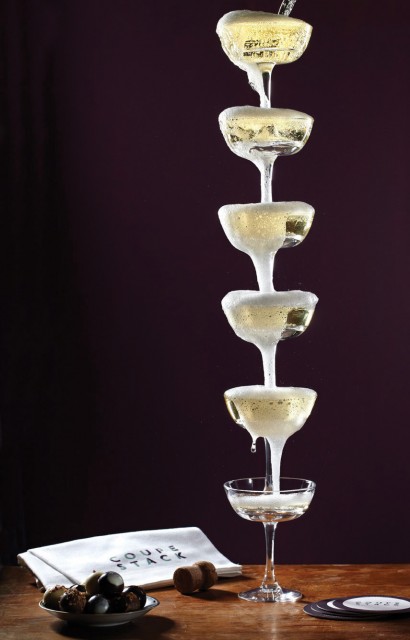 Looking to add a dash of Gatsby-esque glamour to your dinner parties? Then look no further than Coupe Stack, a clever new invention designed by Barnaby Macaulay inspired by a family heirloom given to his great-grandfather by the Maharaja of West Bengal – a set of eight glasses that rest on the flat base of each glass below.

Realising there was nothing similar on the market, Barnaby got to work sketching and the Coupe Stack was created.

Each of its six glasses boasts a ledge inside it to ensure safe stacking. When Champagne, Prosecco or your fizz of choice is poured into the top glass, it flows down from glass to glass creating a sparking wine waterfall, with a 75cl bottle of bubbles filling six glasses. Though given the current trend for magnums and Methuselahs in the UK, the high pour can be prolonged.

While the Cluver family has grown apples at its De Rust farm for years, Jack’s great-grandfather was one of the first to plant cider apple trees in South Africa. Made using Granny Smith apples and other ‘secret’ varieties at the Paul Cluver Winery in Elgin, apples are hand picked then chopped and pressed. The juice is then gravity-clarified in chilled tanks and fermented at cool temperatures. After fermentation, the spent yeast cells are filtered out and a “sparkling of CO2” is added to give the cider “a captivating, celebratory fizz”. Jack describes the cider as “a pure expression of our special corner of the universe encapsulating the beauty, intrigue, mythology and charm of this land.” 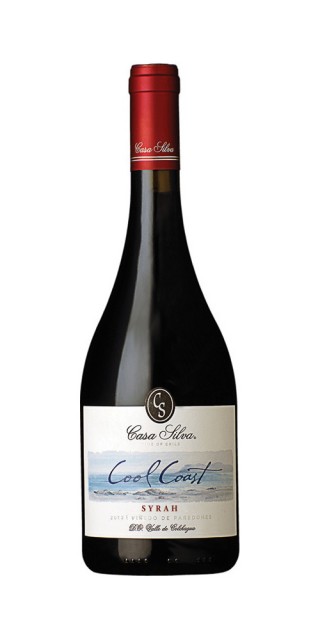 Chilean estate Casa Silva has added a third wine to its Cool Coast range in the form of a Syrah. Made in the cool climate region of Paredones in the Colchagua Valley from a 60 hectare vineyard just 7km from the Pacific Ocean, the Syrah is a sister wine to Cool Coast Sauvignon Blanc, launched in 2010, and Cool Coast Pinot Noir, launched last year.

According to its makers, the Syrah has red fruit aromatics and “smoky and floral notes”. The palate meanwhile, is “juicy and powerful” with “refreshing acidity, soft tannins and an elegant finish”. 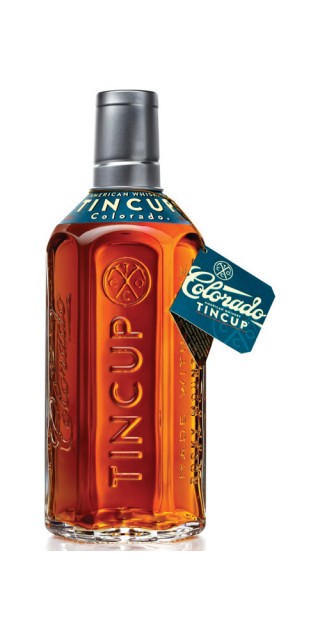 With the Bourbon boom showing no sign of slowing in the UK, a new American whiskey has landed on the market. Tin Cup boasts a high rye content, giving it a spicy edge. Rather than a golf film starring Kevin Costner, the name plays on gold rush miners in the town of Tin Cup in Colorado, who drank whiskey from… you guessed it.

The whisky is made by mashing and fermenting corn, rye and malt for 80 hours. The liquid is then distilled twice and aged in charred oak barrels. Its maker, Jess Graber, says the whisky offers aromas of “citrus, black pepper and ginger snap”, with “spice, cinnamon and caramel” on the palate.

The bottle’s hexagonal shape allegedly stops it from rolling down mountains.

Billed as “a British gin with a Japanese twist”, Jinzu was the winner of the 2013 Show Your Spirit competition. Created by 24-year-old, Bristol-born bartender Dee Davies, Jinzu is made with a mix of classic botanicals like juniper, coriander and angelica, Japanese botanicals yuzu and cherry blossom, and Junmai saké to give the spirit a “smooth finish”.

The competition asked mixologists to create a “dream liquid” they’d like to see on shop shelves and back bars around the world.

The gin is named after the Jinzu River in Japan, which is lined with a thousand cherry trees. 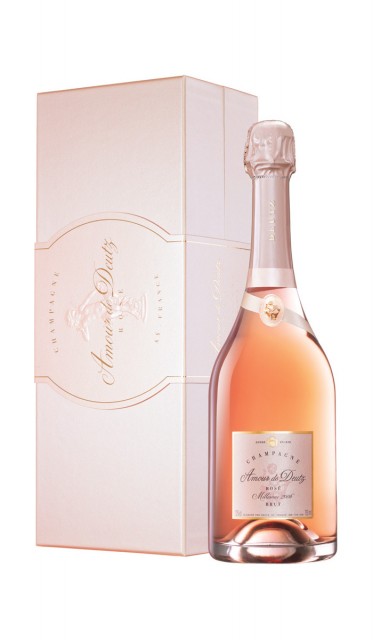 Described by its makers as “an extremely promising prestige cuvée in the purest Deutz style representing the culmination of Maison Deutz’ ‘trio de prestige’,” this rosé Champagne is a blend of 55% Pinot Noir from Aÿ, Verzenay and Bouzy, and 45% Chardonnay from Avize, Chouilly and Villers-Marmery. The fizz gets its character and colour from 8% of still Pinot Noir produced by the house from parcels of old vines in Aÿ and Mareuil-sur-Aÿ.

Boasting a “glittering gold- pink hue”, on the nose are aromas of “wild berries, red currants and vanilla”, while the palate offers “notes of crushed strawberries, blackcurrants, spices and patisserie”.

Deutz recommends enjoying the fizz as an apéritif or with grilled lobster, red mullet, John Dory, beef carpaccio or lamb.

The Purity Brewing Company has created Gnarly, a strong black beer with a limited run of 1,000 corked, Champagne-style 75cl bottles.

Brewed with a variety of Maris Otter, Crystal Rye, smoked and black malts, and hopped with Cascade and Chinook, the beer is then conditioned for six months in former whisky casks. “Gnarly uses Champagne yeast, which gives it a light and tight carbonation and the oak barrels provide a decadent twist,” says Paul Halsey, managing director of Purity, who describes the 6.5% abv beer as offering notes of “spiced black pepper and dark fruits with a hint of orange”, along with “a lingering bitter finish to counter the sweetness produced by the tannins of the cask”.

The beer’s name is a tribute to mountain bikers, “gnarly” being a word that became popular in the 1970s to describe a dangerous but exhilarating ride.

Echo Falls has released a “gently sparkling” alcohol-free, tea-infused sparkling ‘wine’ targeting demand for non-alcoholic alternatives. Tisane has been in development for the past three years and is made from fermented white grape juice infused with tea, however as no yeast is used alcohol is not produced.

Its creator, Dave Pahl, co-founder of alcoholic lemonade brand Two Dogs, said: “Tisane fills a genuine consumer demand delivering an authentic taste experience without any alcohol. It fits comfortably within the repertoire of someone who enjoys an alcoholic beverage but is sometimes looking for a socially inclusive non-alcoholic alternative and also for those who choose not to consume alcohol.”

The first zero alcohol wine to be released by Echo Falls, which is owned by Accolade Wines, Tisane is described as having a “gentle mousse with light aromas and a delicate palate of tea-infusions which adds structure to a sparkling white wine without the alcohol.”