UK off-licence group Conviviality Retail has bucked the trend by reporting “strong” Christmas trading as the company announced a first half pre-tax profit rise of 46.7%. 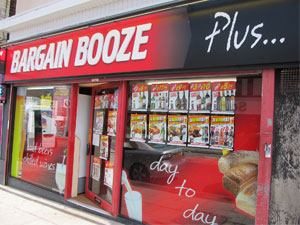 Whereas Majestic, Tesco and Morrisons all struggled to match each others’ aggressive promotional strategy over the Christmas period, Conviviality Retail, whose 599 stores across the UK include the Bargain Booze and Wine Rack chains, saw 2.6% growth in the two weeks to 4 January and described trading as “in line with expectations.”

The Christmas trading season coincided with the launch of a smartphone app-based loyalty scheme for Bargain Booze customers. Called “As If It Wasn’t Cheap Enough Already”, the app offered personalised deals and competition prizes from the discount retailer. Conviviality reported that over 2,000 customers had so far subscribed to the initiative.

The company revealed this Christmas performance at the same time as it released figures for the 26 weeks to 26 October 2014. Alongside positive pre-tax profit figures for the first six months of its financial year, the company reported a 1.7 percentage point increase in gross profit margin over the same period to reach 9.5%. The news builds on last year’s 31.5% rise in pre-tax profits.

The results come on the back of a year which has so far seen a major refurbishment of the Bargain Booze outlets and the ongoing conversion of 26 Rhythm & Booze stores bought by Conviviality last year. Meanwhile Wine Rack has been expanding across the north of the country, boosted by an improved logistics set-up, and summer 2014 saw the launch of a new discount drinks retail brand called BB Warehouse.

Announcing the figures, Diana Hunter, CEO of Conviviality, said: “I am pleased with our first half year results which are in line with our expectations in a highly competitive market. Despite closures of underperforming stores in the period and the integration of the Rhythm and Booze units, sales have been maintained and store numbers have started to grow as we open higher quality outlets. This has led to increased profits for both the Company and its Franchisees.”

As a result of these developments, Hunter continued: “We now have a solid platform from which to accelerate Franchisee growth, our pilot with Scotmid demonstrates the potential for Bargain Booze to expand throughout the UK, and with our strong balance sheet we have the ability to exploit growth opportunities as they arise.”