With a decent vintage on offer in the forthcoming en primeur campaign, there are faint traces of optimism among merchants, despite a four year decline on Liv-ex. 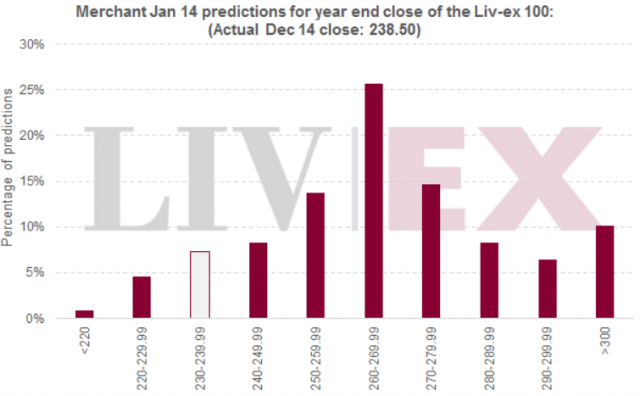 “The last question we ask is ‘what’s your best guess on the Liv-ex 100 closing the end of the year,” explained Liv-ex director Justin Gibbs.

The index closed 2013 on 257.13, and the average prediction was for a 3.7% increase over the year, which Gibbs said was “almost certainly the least bullish” he had seen.

“People were more cautious at the beginning of last year than they’d ever been, but in the end [their best guess] still proved to be too bullish.” 2014 closed down 7.3% on 238.5.

“The year never got off on a positive,” he continued. “It got nailed in April, May, June as the full horror of the ’13 campaign was realised. Since then the market, admittedly on light volumes and not a great amount of activity, has been holding steady, if not slightly perking up.”

It may be too soon to crack open the Champagne, but he felt it “suggests the sellers are getting tired. They want to believe Bordeaux is going to do something interesting in April. The market wants to believe that the 2014 is a vintage with decent volumes and decent quality that will be priced in a compelling way.”

If not, then all bets are off.