Royal Caribbean International has partnered with Makr Shakr to create the world’s first “bionic bar” tended by robots aboard its new “smart ship”. 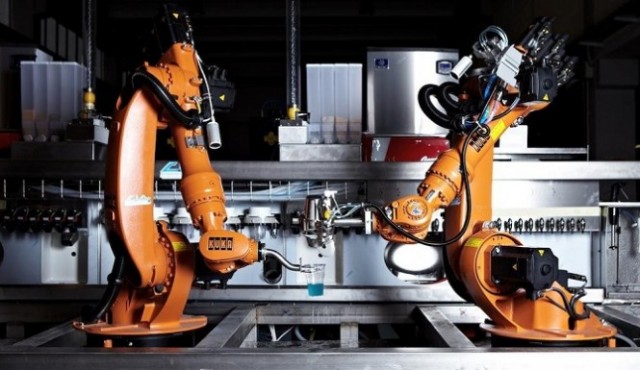 Claimed to be the world’s first robotic bar, the bionic bar will allow guests aboard the Quantum of the Seas to place drinks orders via tablets and then watch as they are mixed by robotic bartenders programmed to add the right amount of mixers, ice and even garnish.

Each robot can produce one drink per minute and up to 1,000 drinks per day, according to Royal Caribbean, with robotic arms able to draw alcohol from dozens of bottles hanging from above.

Alessandro Insica of Makr Shakr, the company that developed the machine for Royal Caribbean, said: “You have a choice of a Bionic Bar signature recipe or a classic recipe, or you also can create your own. There are endless combinations.”

But despite your bartenders being less than human, there will still be gratuity added to any drink purchased from a robot with all tips shared among crew members.

The bionic bar is just one of the many technologically-minded features of the futuristic ship, which made its maiden voyage on Sunday, with all guests issued with RFID wristbands, allowing them to navigate the ship, make onboard purchases and unlock their rooms with a simple tap.

Every member of staff is equipped with a tablet to keep track of guests’ tastes and preferences, while its custom Cruise Planner app allows voyagers to research and book dinner reservations, shore excursions and spa appointments before even setting foot on the ship.

Last year Asahi, Japan’s largest brewery, created a robotic beer pouring machine for high-volume bars that can pour six beers in 12 seconds showing off its invention at the International Robotics Expo in Tokyo.