Vietnam restaurateurs told to cool off

A government official is calling for new rules which would see Vietnamese restaurants selling beer compelled to maintain a temperature below 30C. 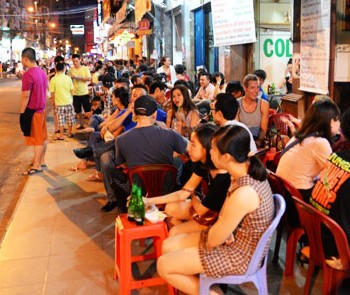 The proposal follows the unsuccessful attempt to ban beer sales in Vietnam’s small street bars, known as “sidewalk” bars, which are often merely outside seating for bars and restaurants.

The proposal was knocked back after a backlash by beer companies, bar owners and drinkers, and this new temperature control proposal has been met with similar opposition.

If enforced, restaurants would be compelled to maintain their room temperature to below 30C, and likely have to install costly air conditioning equipment, while those serving bia hoi (fresh beer) would be required to have the means to keep beer cold all day, as reported by Tuoitre News.

The country’s Ministry of Health said the rules would help to “protect consumers”.

However it has been accused of being “out of touch” by residents given the huge popularity of outdoor beer parlours, with the proposed regulations said to lack “feasibility”.

Last year the Vietnamese drank more than two billion litres of beer making it the third largest beer drinking country in Asia, behind only China and Japan.

It is also one of the biggest beer producers in the region and has already produced around 2bn litres so far this year, a 6% increase on this time last year.