Could Budweiser be better than craft beer?

The simple answer: “It already is.”

That provocative question in the headline aims to get at the single greatest marketing challenge facing Budweiser, namely, “How is the King of Beers distinctive?” When a brand lacks distinctiveness– when it does not deliver to its drinkers an experience that stands apart from competition– it is fated to decline. Drinkers will leave for other beers. Which is exactly what’s happened to so many former Budweiser fans over the past two decades. Whatever distinctiveness might have accounted for Bud’s success in the past (we speculated what that might have been), it is now long gone.

Fluffy advertising claims (such as boasts of being the most-popular brand), creative label designs, the brewing process, and ingredients can all contribute to distinctiveness. More critical, however, is the need for real, consumer-perceived distinctiveness based on the drinking experience. Without some positive and real aspect of drinking the beer, smoke, mirrors and boasting will not sustain distinctiveness.

Here’s where craft brewers have excelled. They’ve mostly eschewed marketing gimmickry and instead concentrated on giving drinkers more flavor overall, and different flavor notes, in nearly every one of their offerings. In other words, real distinctiveness.

Assuming its brewing recipe won’t be drastically changed, how is it possible, then, for Budweiser to be distinctive anymore? Especially when pundits have already sung its requiem intoning, “Consumer tastes changed.”

Only a fool would expect Budweiser’s fortunes to improve by staying the course. The King of Beers will prevail again only when its taste-experience is seen as distinctive and appealing. It falls to the marketing folks to identify this needed change and figure out how to accomplish it.

The task is to find a desirable aspect of the beer taste-experience on which Budweiser stands apart, and actually excels. As in “better.” An aspect even craft beer’s most loyal geek would have to grudgingly admit is true. An aspect of taste that’s not marketing fluff, but is unquestionably present in Budweiser today. Something important enough to beer drinkers to cause Bud’s fortunes to begin to turn.

As always, the answer must lie in the beer itself. And with some looking, we think we may have uncovered it. Amazingly, from no less a source than Budweiser’s own website:

Until finding it in a quiet corner of Budweiser.com, I can honestly say I’d never heard that particular descriptor of beer taste. It was news to me, and when you’re setting out to cause change in the market, news is good.

“Snap” is an accurate and intriguing description of an actual taste property of Budweiser: The way the beer’s flavor does not linger cloyingly, but rather disappears in a… snap. The fact that this product characteristic is supported by the use of more expensive rice in the beer’s recipe adds legitimacy and depth to the strategy.

How might this come together in a compelling strategic effort? 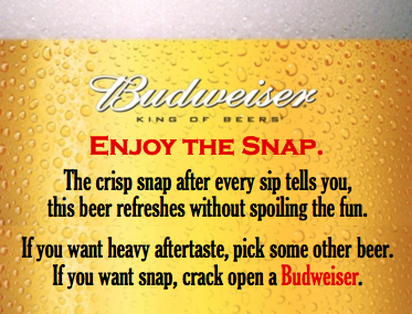 Would craft-beer partisans whine? Of course they would. It’s what many of them seem to do best. And they’d certainly counter-argue Budweiser has less taste to begin with. Or they’d proclaim their love for the way their over-hopped beer-choice hangs around on the tongue. Smack-smack. Good for them.

But they all know their favorite craft beers can’t match Budweiser’s snap. No way. And for a good many other beer drinkers — including many still loyal to Budweiser — that snap could just be the ticket to knowing they’ve chosen… a better beer.