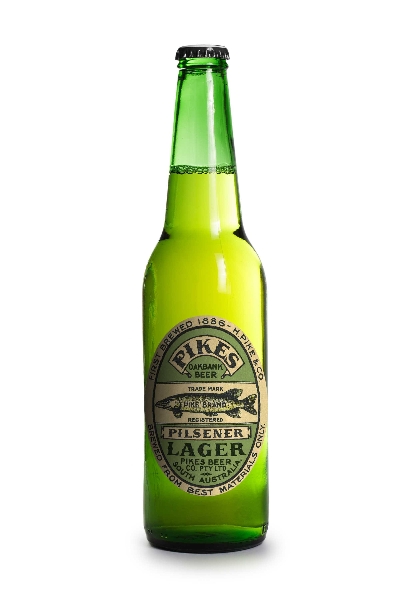 Chris Shanahan of GoodFood.com writes about how the popular Clare Valley winemaker, Pikes, expects to open a brewery alongside its wine cellars in December.

“A recently hired brewer, due to join Pikes in October, will have three existing recipes at hand when he starts,” he writes, one of them being this new sparkling ale.

“The ale is a full-bodied, malty and fruity style. A big but not overwhelming dollop of hops offsets the malt sweetness and provides a lingering, bitter finish,” says Shanahan. 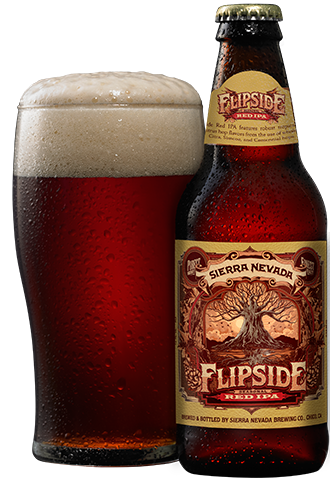 Will Gordon writes in The Concourse magazine, about how Sierra Nevada Pale Ale is still one of the “finest widely available beers in America,” but the company has been getting “much more aggressive with new releases,” among them Flipside Red IPA.

Flipside pours a “deep copper with a substantial off-white head, and “at first sniff, “ it reminds him of a “sweeter, maltier Sierra Nevada Pale Ale, with notes of chocolate and dried orange along with earthy red-ale smells.

“The malt (toast and caramel) is far more prominent than the hops, which suggest a dirty dankness rather than the juicy hop burst of a true IPA.

“The finish is long, dry, and mostly plain, with just a touch of pine resin.“ 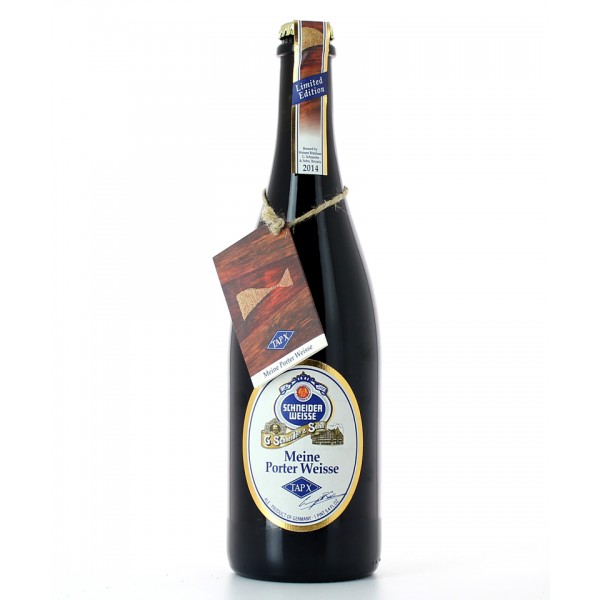 Jordan Saint-John writes in Ontario’s Standard Freeholder, about this beer that “takes its inspiration from porter, a style of beer native to England.

“The idea,” he continues, “is to fuse a wheat beer, notably a Weizenbock (a sort of heavier, dark wheat beer) with some of the characteristics of porter. It’s an interesting idea. 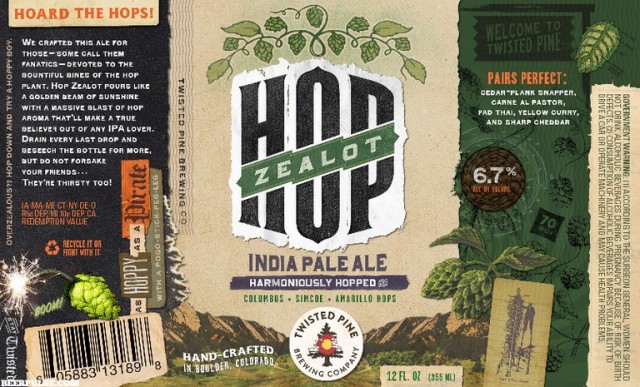 Emily Hutto in Denver’s 5280 Magazine tells her readers to “make way for the Hop Zealot.”

As opposed to the “piney, citrusy, and earthy flavours” typically associated with IPA, this newly-released beer is “a 70-IBU IPA that packs a big punch of juicy, floral hops—specifically of the Columbus, Amarillo, and Simcoe varieties, if you want to get technical.

“The bold hoppy flavour is well-balanced with a crisp, dry finish,” she continues.

“Though Hop Zealot’s design is compelling, the beer is more than just pretty packaging.” 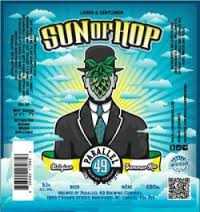 Jan Zeschky writes in Canadian magazine The Province about this “remarkably restrained beer for Parallel 49 considering that the blonde/golden ale style gives them free reign to clock up the ABV – something the brewery hasn’t really shied away from in their two years on the scene.”

But, “I’ll happily take restraint if it tastes this good,” he enthuses. “And that’s quite a compliment considering the smell of almost every beer containing Sorachi Ace hops immediately reminds me of men’s washrooms.

Sun of Hop pours “a clear pale straw colour with a dense, bright white head that slowly fades to a thin rim,” he writes.

“Warm hay and grass are present on the nose, alongside light notes of preserved lemon and orange rind. Crisp biscuity malt is also evident, as well as a clean and fresh, light saline edge.”

And on tasting, “the beer is clean and brisk with full mouthfeel and crisp carbonation. Gentle herbals play out up front before light citrus notes come through in the middle along with a hint of bubblegum. Slightly warmer biscuity malt notes appear in the finish.” 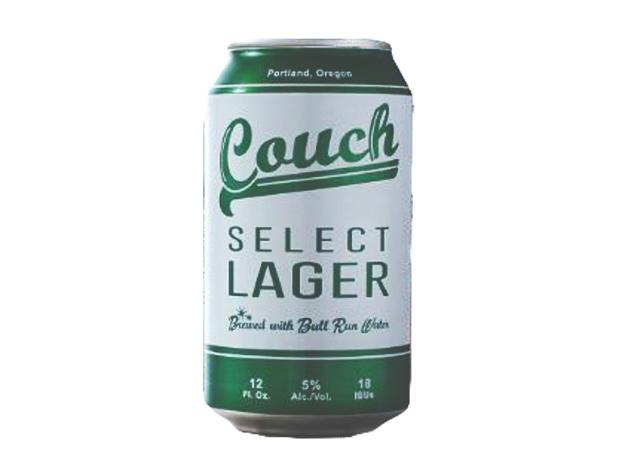 Martin Cizmar writes in Portland’s Willamette Week about “this sipper that comes in simple green-and-white cans” that “looked promising,”

Lagers, he continues are “the hardest brew to nail,” but it managed strong notes of flower-petal sweetness.” 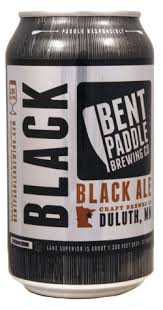 Graham Averill writes in Paste magazine, about this beer that aims to be a “cross between a porter and a stout—a beer that straddles those style guidelines by borrowing characteristics from both sides of the spectrum.

“The beer pours a dense black, with a thick tan head. The nose is subtle, with just slight notes of roasted coffee,” he continues.

“Digging in,” you find an ale with “robust notes of dark chocolate that hit you with a roasted sweetness upfront, then follow up with a vaguely dark chocolate bitterness.

“We’re talking about a killer canned stout that’s satisfying without being overly complex,” he enthuses. 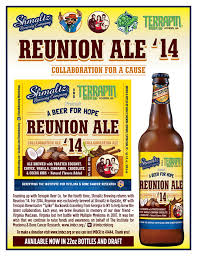 Edward Seiger writes in the Express Times about this offering that marks “the fourth time Schmaltz Brewing Co. have teamed up with Terrapin” in benefit for the Institute for Myeloma and Bone Cancer Research in California.

“Shmaltz brews a beer each year in the memory of Virginia MacLean, a cancer research supporter, who died in 2007 from a cancer of the plasma cells or Multiple myeloma.”

On the beer, he writes how it is brewed with “toasted coconut, coffee, vanilla, cinnamon, chocolate and cocoa nibs, which weighs in at a respectable 8 percent ABV.

“Reunion Ale is dark brown with an aroma that hints at coffee. A few deep breaths will reveal the coffee quality is the predominant quality.”

And on tasting, he says, “you’ll definitely detect the beer’s coffee notes, perhaps the quality that gives it that distinctive flavour. And it won’t take long until you’ll get a slight bitterness on the back end.”

The brew “offers a rather bold, strong flavour” overall. 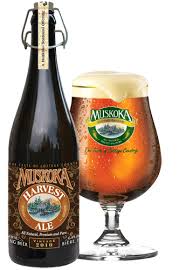 Beppi Crosariol writes in the Globe And Mail about this beer that is free from “strong spicy characters to suggest pumpkin pie or Halloween treats.”

Described as “delicious” and “subtly extraordinary”, the beer is “rich-amber in colour, with a lingering layer of light foam, it’s creamy, round and simultaneously invigorating.

“Great weight on the palate and a terrific flavour arc,” the beer is “fine for aromatic fall fare roasted with herbs in the oven.” 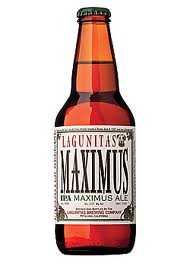 Finally, Matt Miller writes in EverythingOnTap.com about this IPA that “pours a rich, profound, very-hazy copper-orange, with sediment in the glass.”

This ale “should be stored cool (but not cold), and as you pour and drink it, allow it to warm to room temperature”, as “this will allow you to experience the full hops profile.

“There is also a floral undertone that can be detected when the ale warms up.

“The bitterness is very strong, and lingers on the palate long after the finish.”