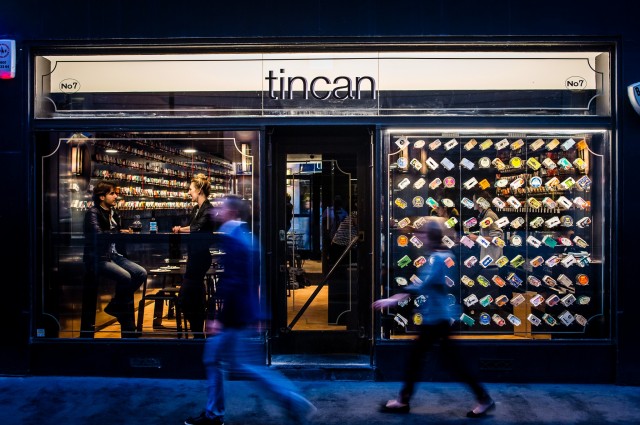 Always keen to keep on top of the latest dining trends, db’s deputy ed Lucy Shaw jumped at the chance to try out London’s latest pop-up, Tin Can in Soho, where, as the name suggests, all of the food is served out of tins, meaning the pint-sized restaurant needs neither a chef nor a kitchen. 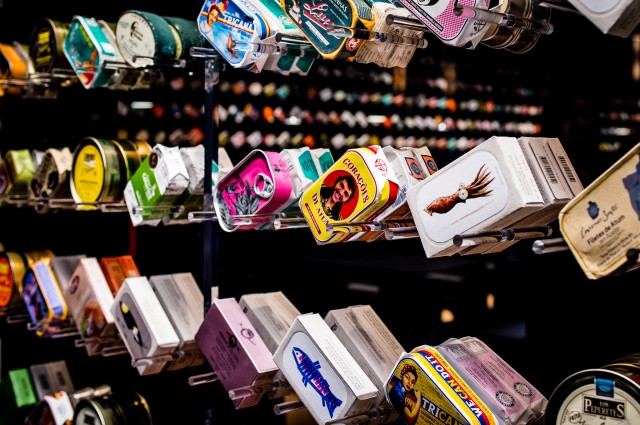 The creation of AL_A architects, the idea for Tin Can was inspired by the Scandinavian and Mediterranean tradition of tinned seafood, with the space aiming to elevate the humble tin can’s image from student staple to “an object of desire”. db can recommend the anchovies, Galician octopus and bonito belly. 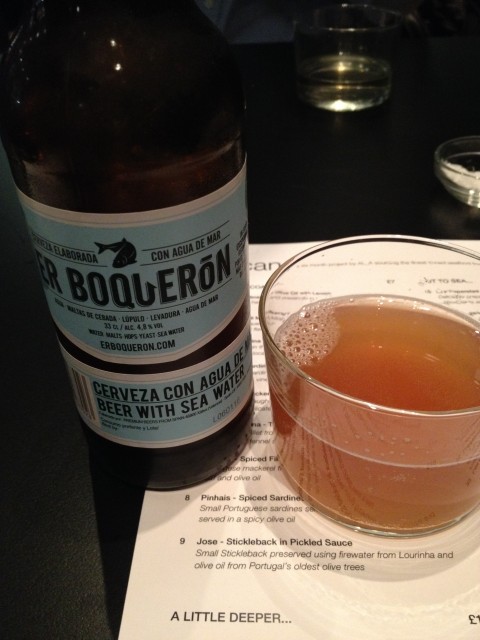 On pour at Tin Can is the world’s first seawater beer, Er Boqueron, made by Valencian craft brewer La Socarrada. Using water from the Mediterranean Sea filtered “exhaustively” before use, the light and fresh blonde beer itself is made using a process dating back to 1516 and is both unpasturised and unfiltered. 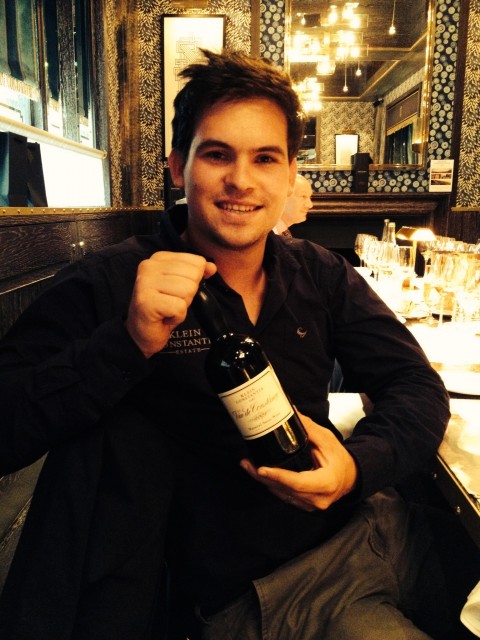 Jetting into town this week was Matt Day, the young, gorgeous and talented chief winemaker at Klein Constantia in South Africa. Hosting a lunch at diner deluxe Bob Bob Ricard in Mayfair, Day talked guests through the latest vintages in the KC stable, including a pair of Sauvignon Blancs. During the lunch, Day was keen to stress the need for South African winemakers to strive for terroir specific Sauvignon Blanc rather than resorting to making “Coca-Cola” wines. 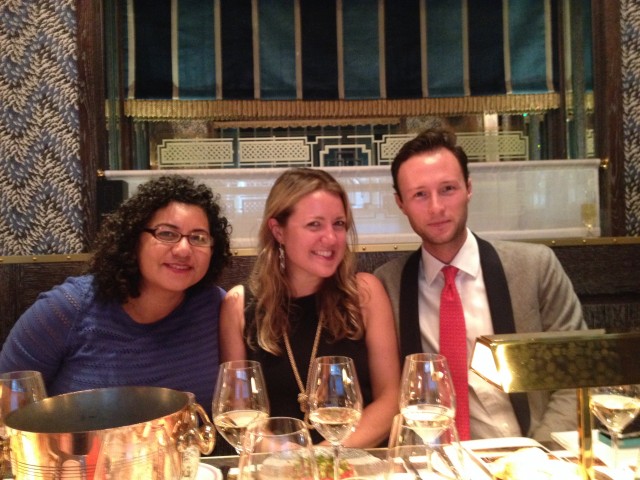 Among the guests at the Klein Constantia lunch were wine writer Denise Medrano (left), Sophie McLean of Bancroft Wines and John Franklin of Mentzendorff. 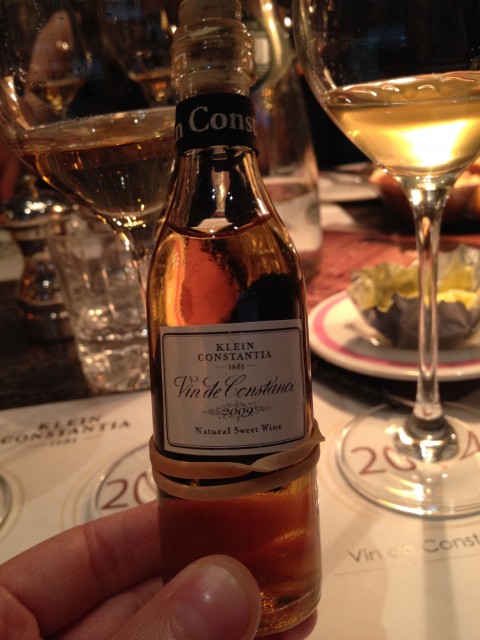 Guests were treated to an Alice in Wonderland-like miniature of the latest vintage (2009) of the estate’s flagship, sweet wine Vin de Constance. 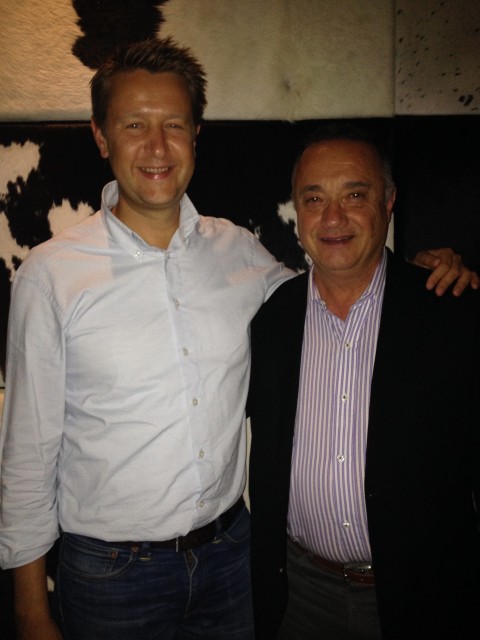 Also taking place in town this week was a dinner at steak specialists Gaucho in Piccadilly hosted by José Galante, chief winemaker at Salentein in Argentina’s Uco Valley (pictured on the right beside export manager Robert Bruijnzeels). While feasting on prawn ceviche, empanadas and hunks of ribeye, Galante, who worked for Catena for 34 years, talked tasters through his single vineyard Chardonnay, single varietal Cabernet Franc and new “icon” red blend Gran VU 2011. 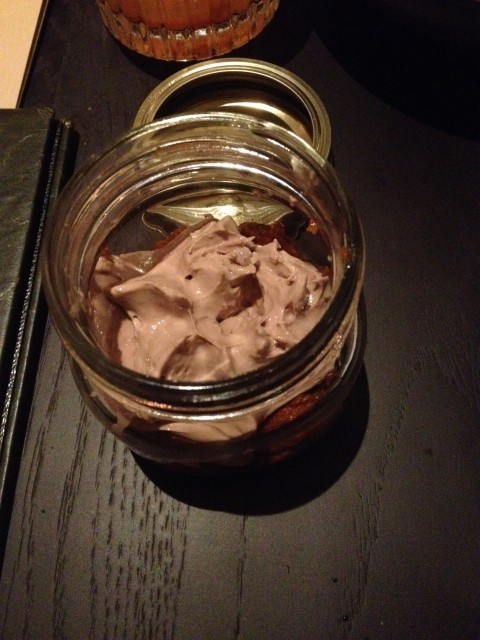 With new restaurants springing up every week in the capital, it can be hard to keep up. One of the most exciting new openings is Tredwell’s in Covent Garden – Marcus Wareing’s casual dining concept. With all dishes designed to be shared and available in small and large formats, highlights included slow cooked beef shortrib; crispy prawns with fennel; sticky smoked chicken thighs; and chicken liver mousse with bacon jam (pictured), which was death row dinner good. 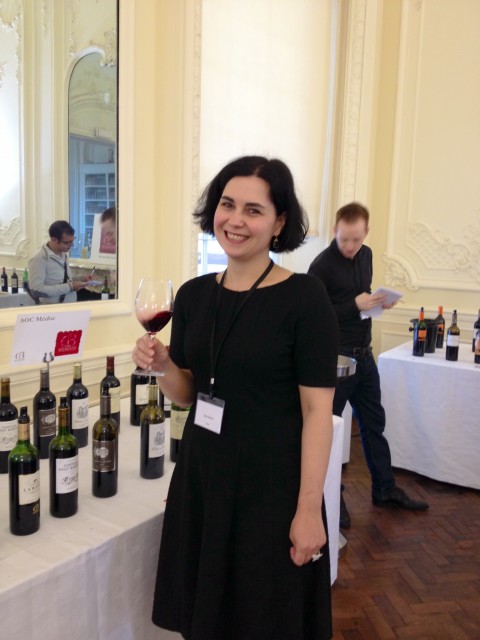 Newly crowned Master of Wine Anne Krebiehl was all smiles at the Cru Bourgeois tasting at The British Academy in Pall Mall this week. 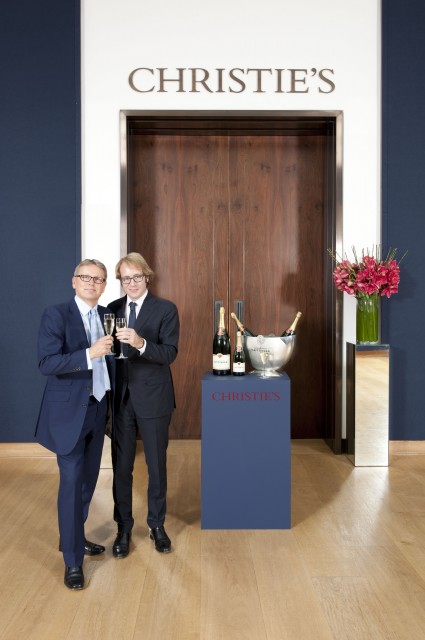 Clovis Taittinger, export director for Champagne Taittinger, and Jussi Pylkkänen, president of Christie’s Europe, the Middle East, Russia and India, celebrated their recent partnership with a glass of, what else, Taittinger. The auction house and Champagne house have agreed a partnership which will see Taittinger served at key Christie’s key events worldwide. 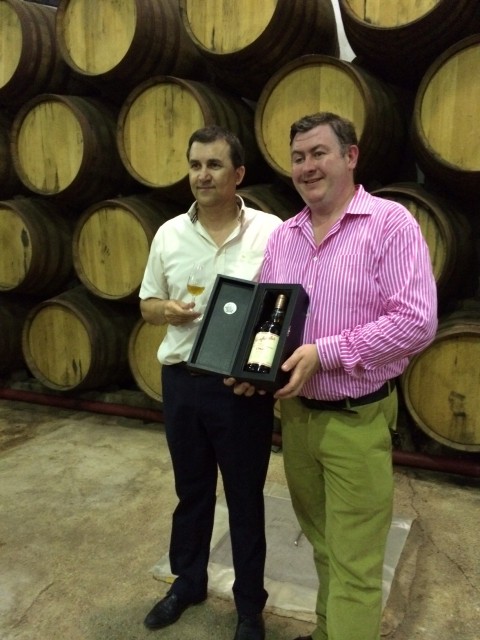 George Grant, sales director of Glenfarclas, and Huelva-based Sherry cask supplier Miguel Martin show off the whisky brand’s latest release: a 1966 Fino Cask. 1,400 bottles have been produced from four casks as the first part of a new series from Glenfarclas. Expected to launch worldwide in early November, the expression is likely to carry an RRP of £750-800.

Mika Häkkinen, two-time world drivers’ champion and Johnnie Walker’s responsible drinking ambassador, will be at the Ryder Cup to encourage 25,000 golf fans to ‘Join the Pact’ to never drink and drive. The initiative, launched by Johnnie Walker, will see fans invited to join the 1,000,000 people who have already pledged to never to drink and drive at jointhepact.com. 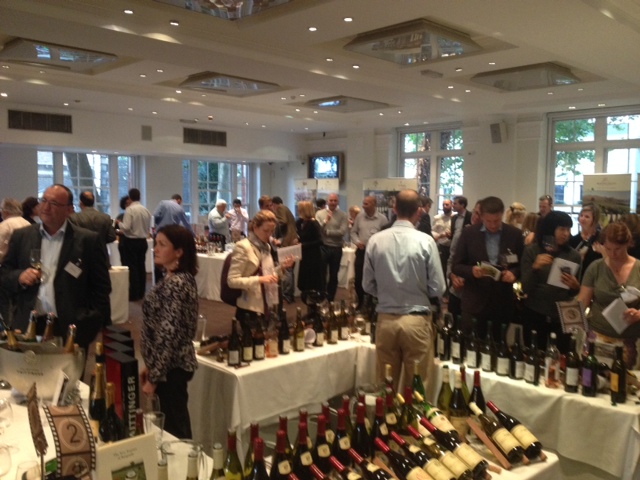 db tasted its way through Hatch Mansfield’s impressive portfolio of wines at its annual tasting held at BAFTA in London’s Piccadilly on Monday. Following the tasting, and a Taittinger Champagne reception, guests were treated to a private screening of Chef – a film fit for a foodie – starring Dustin Hoffman and Scarlet Johannson. 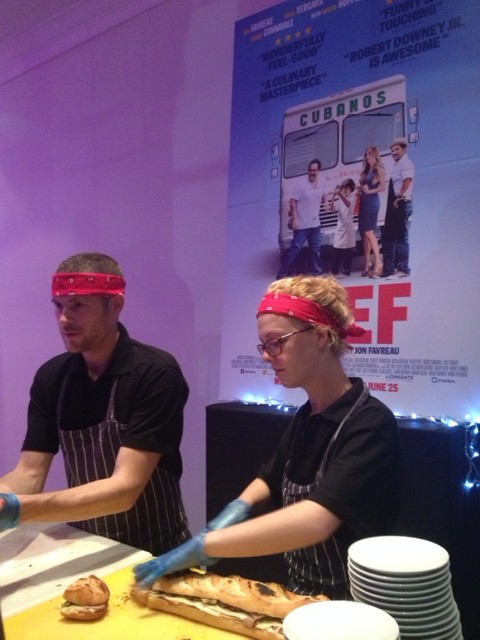 Having drooled over many a Cubanos pork sandwich on screen, db was delighted to be served the very same dish following the film bringing its edible delights to life, alongside a glass of Taittinger Prestige Rosé. 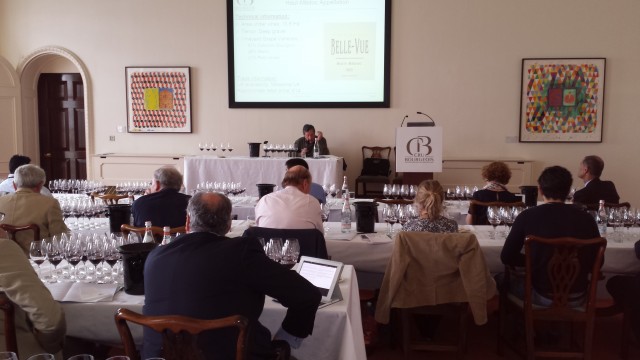 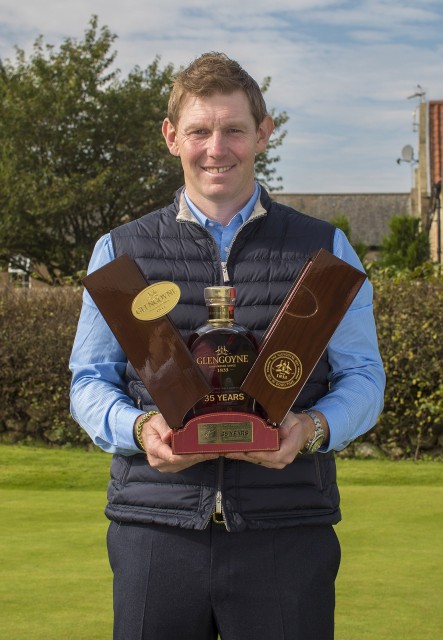 Scotland’s Ryder Cup rookie Stephen Gallacher was presented with a rare decanter of 35YO Glengoyne Highland Single Malt Scotch Whisky ahead of his appearance at Gleneagles this week. Stephen, who is a whisky enthusiast and a loyal supporter of Glengoyne, is the only Scottish golfer to secure a place in the Ryder Cup 2014 European Team and the limited edition decanter was presented to mark this achievement. 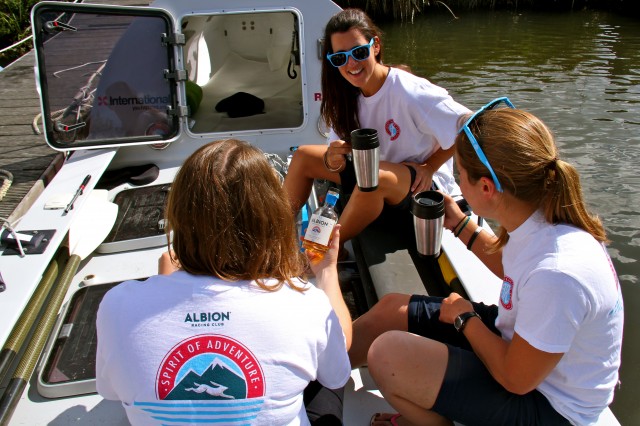 Albion Racing Club unveiled its special edition pink wax sealed bottles of its Albion Spiced Malt this week in support of The Coxless Crew – a team of female adventurers who are planning a world first row across the Pacific to generate awareness of women who face extreme adversity and raise funds for Walking With the Wounded and Breast Cancer Care. The expedition will take the crew between five and six months to complete in a 29ft long, 7ft wide bright pink boat. 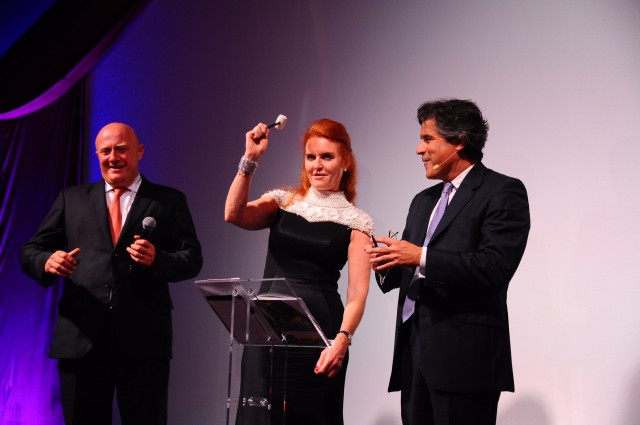 Sarah, Duchess of York, was of the distinguished guests to attend this year’s ‘Part des Anges’ Charity auction in Cognac last week, whose charity ‘Children in Crisis’ was one of the main beneficiaries. The event, featuring 25 one-ff and rare Cognacs, raised a record €237,600 for charity.

Champagne Jacquart, sponsor of the 100% Design Show held in London last week, presented 10 of the 20 best designers with a newly designed, limited edition Magnum of Rosé Mosaïc at the Pecha Kucha. 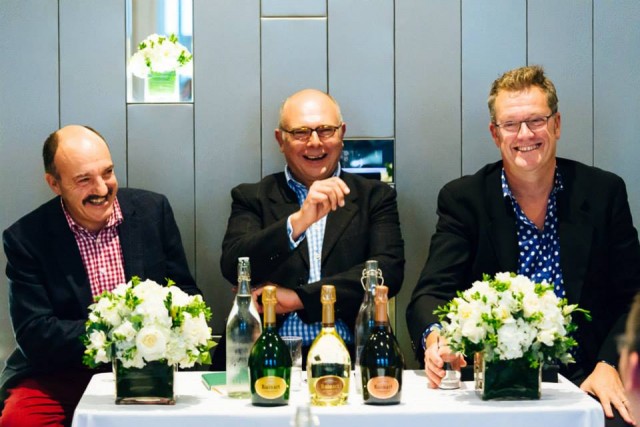 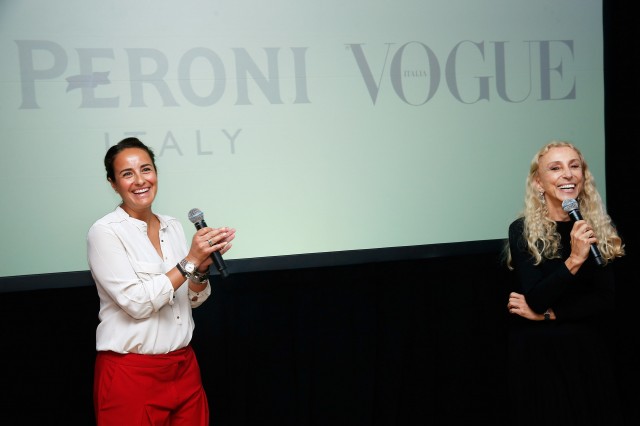 Vogue Italia editor-in-chief Franca Sozzani and Peroni Nastro Azzurro’s global brand director Claudia Falcone announced a two-year global partnership at an event held at the Italian Trade Commission in New York this week. It will result in an exhibition featuring contributions from a diverse group of international talent including Olivia Palermo and Eva Herzigova, designers Manolo Blahnik and Philip Treacy, and Hollywood royalty such as Quentin Tarantino and Michael Fassbender.