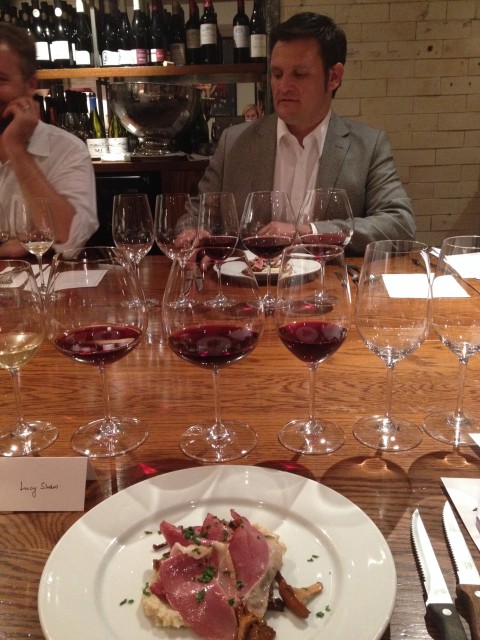 It’s been a busy week for wine dinners, with the Chileans, Argentinians and South Africans descending on the capital en masse for The Beautiful South tasting. On Monday we headed to Vinoteca in Farringdon hosted by Alejandro Galaz, chief winemaker at Viña Ventisquero in Chile. During the dinner, Galaz showed off his Tara wines made from grapes grown in Chile’s Atacama dessert. Tara Pinot Noir paired particularly well with our starter of smoked duck and girolles. 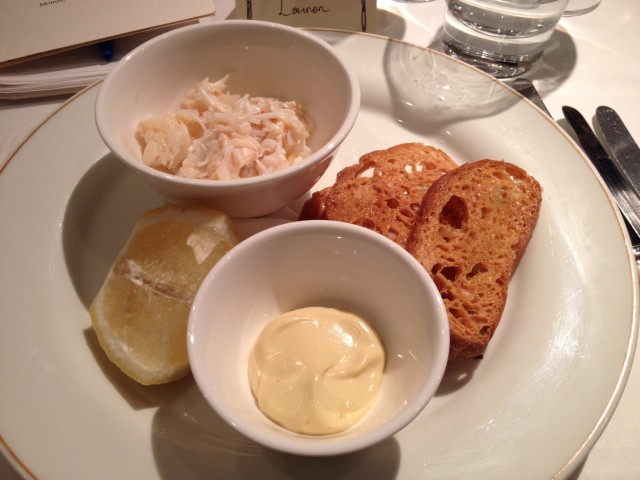 Guests at a dinner hosted by UK wine merchant Bibendum on Monday at Quo Vadis in Soho were treated to a menu which included this delicious crab and mayonnaise starter. The four-course dinner was accompanied by a selection of wines from the evening’s guests of honour, South African winemakers Gordy Newton Johnson from Newton Johnson, Springfield Estate’s Jeanette Bruwer, Rollo Gabb from Journey’s End and Tertius Boshoff from Stellenrust. 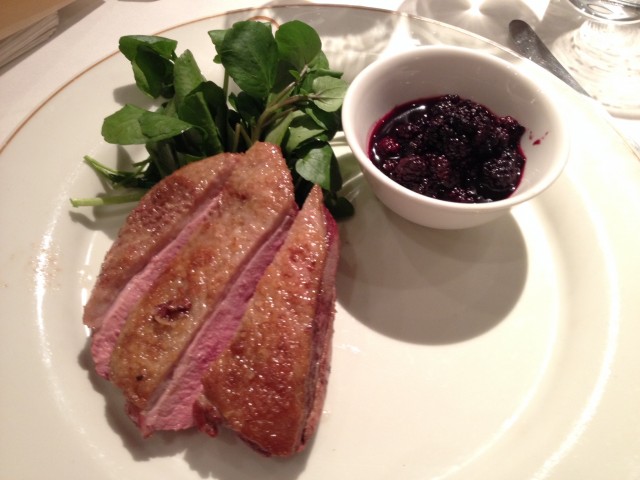 Each of the winemakers were asked to bring with them a bottle of something “unusual, old or interesting”, which for Springfield Estate’s Jeanette Bruwer was two bottles of a 1997 Cabernet Sauvignon, one aged for six years in a steel cage off the South African Cape, and the other stored in the traditional way on land. For the main course we tucked into roast duck with watercress, blackcurrants and roast potatoes. 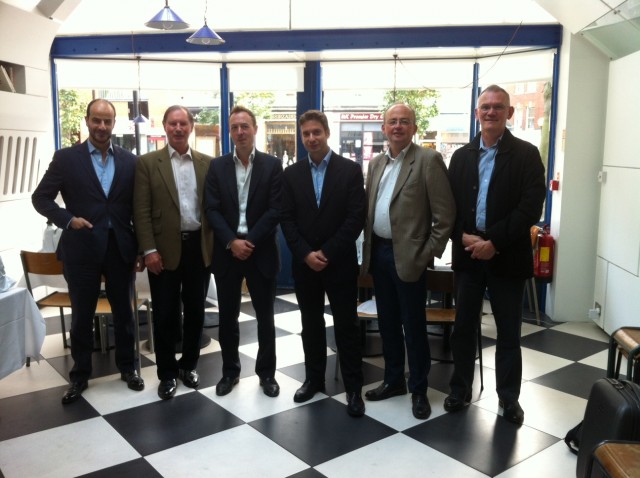 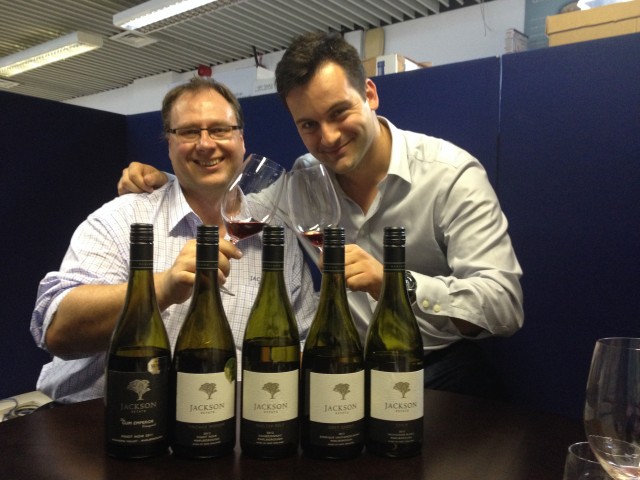 The ever dashing Emanuele Barrasso (right) of RandR Teamwork popped into db towers this week with the affable Matt Peterson Green, chief winemaker of Jackson Estate in Marlborough, who offered up a quintet of wines for tasting, including Grey Ghost Sauvignon Blanc and the Gum Emperor Pinot Noir.

Tuesday was a busy one, kicking off with the Louis Roederer International Wine Writers’ Awards at The Royal Academy, where db’s own Gabriel Stone and Lucy Shaw were both up for awards. Next up was a decadent party in the tip of the Gherkin to celebrate the launch of Perrier-Jouët Belle Epoque Rosé 2005. 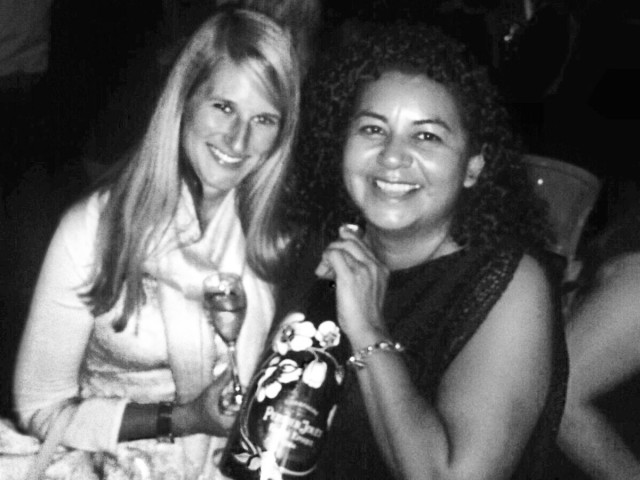 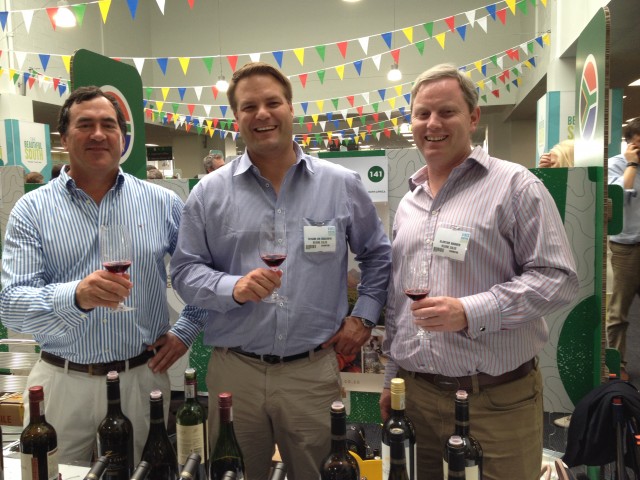 Wednesday saw the start of The Beautiful South tasting at Olympia, where over 300 producers from South Africa, Chile and Argentina were on hand to pour their wines and tell their stories, including this trio from Kleine Zalze in South Africa’s Stellenbosch region. 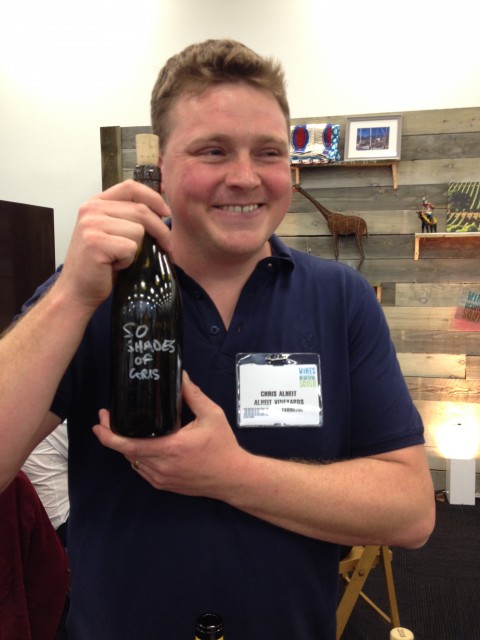 One of our 30 Winemakers Under 40 to Watch, cheeky South African Chris Alheit of Alheit Vineyards in Walker Bay was showing off his latest creation, a Sauvignon Gris with the working title “50 Shades of Gris”. He assured db it won’t be released under that name, which we think is a shame… 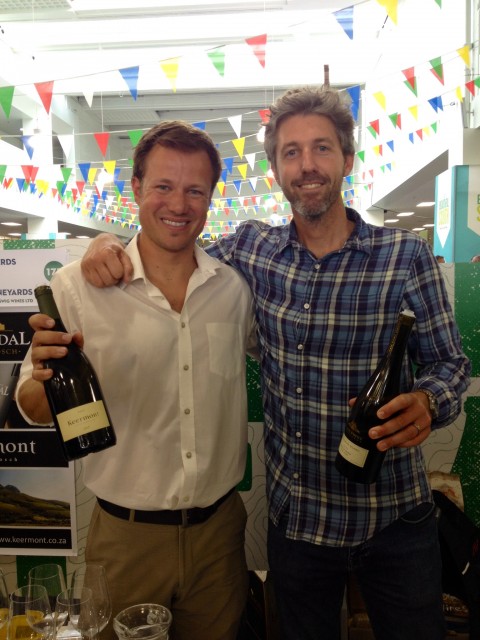 Having left their surfboards at home, surfer/winemaker duo Alex Starey of Keermont and Duncan Savage of Cape Point were only too happy to show db their latest creations, including Fleurfontein, a sweet wine made from Sauvignon Blanc, and Savage Red, a 12.5% abv blend of Syrah, Grenache and Cinsault.

The Wine Explorers touched down in Canada after eight months on the road exploring the world’s lesser known wine regions including Ethiopia, Madagascar and Taiwan. So far the wine-wandering duo have visited 17 countries tasting more than 850 wines.

Friends and family of Michael Cox, Master of the Vintners, who died earlier this year, will run the Marathon du Médoc tomorrow to raise money for drinks industry charities The Benevolent, which supports those suffering from illness or unforeseen circumstances, and The Vintners’ Foundation. “Team Cox” consists of Michael’s wife Lynne, his twin brother David, husband and wife MW team Susie Barrie and Peter Richards, Eduardo Chadwick, Francisco Baettig and Andres Izquierdo of Viña Errazuriz, Alvaro Arriagada from Wines of Chile, Greg Sherwood MW and Vicky Thompson from Handford Wines and Richard Dare from Avery’s Wine Merchants. So far the team have raised and impressive £13,127.95. To make a donation visit justgiving.com/teams/teamcox. 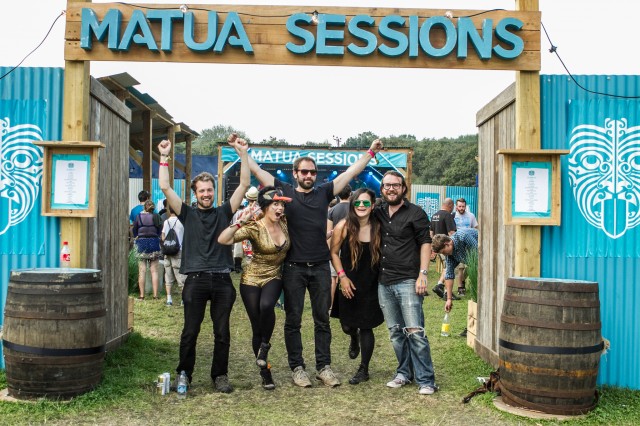 Matua hosted their Matua Sessions stage at Bestival, in the Isle of Wight this weekend with festival goers getting into the swing of things with a glass of Kiwi Sauvignon Blanc. 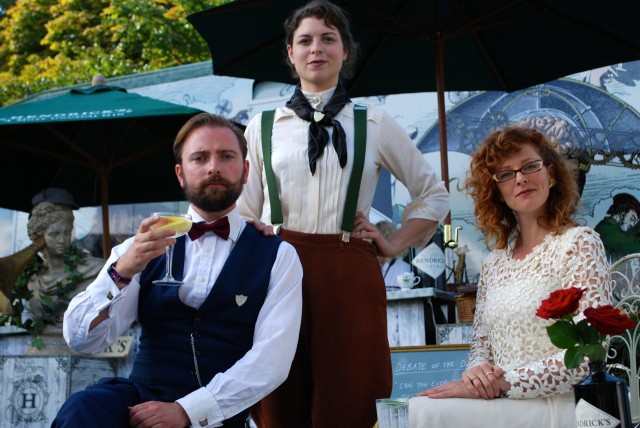 Hendrick’s Gin headed to the Welsh wilderness for Festival Number 6 this week bringing with them their Carnival of Knowledge. With a schedule of intriguing events including a journey through the history of the Martini and an exploration into the Power of Smell, The Hendrick’s Carnival of Knowledge invited those of an inquisitive nature to indulge their curious side alongside a Hendrick’s cocktail. 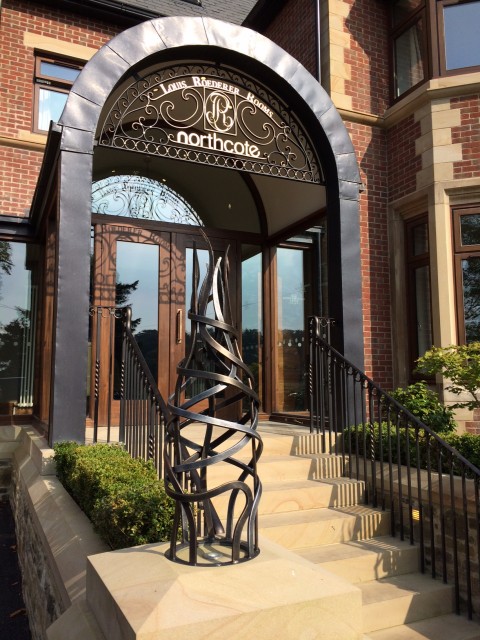 The entrance to the brand spanking new Louis Roederer Rooms at the Northcote Manor Hotel in Lancashire, where db enjoyed lunch on Wednesday courtesy of the Champagne house, along with the region’s top hoteliers, and Northcote’s founder Craig Bancroft – as well as Roederer’s always charming executive vice-president Michel Janneau. 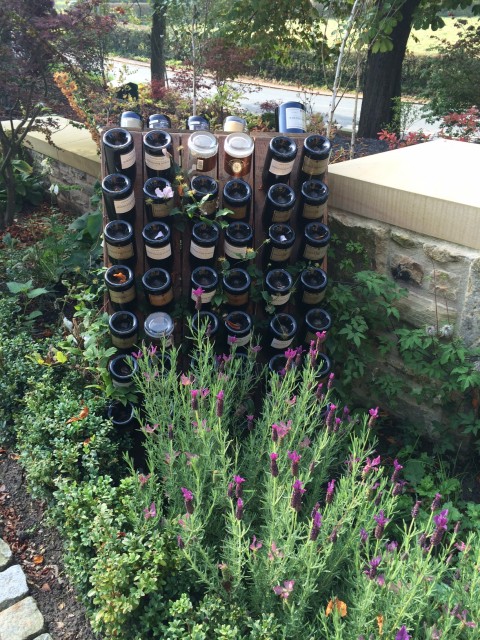 The Roederer theme extends to Northcote’s gardens, where the hotel has installed riddling racks with empty bottles of Roederer, including its flagship cuvée, Cristal. 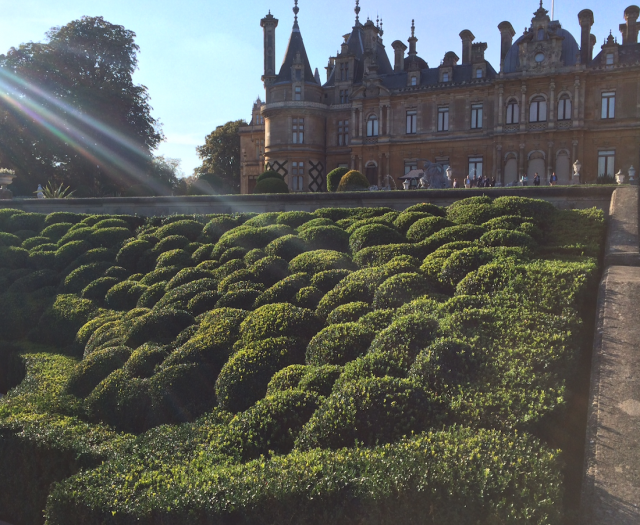 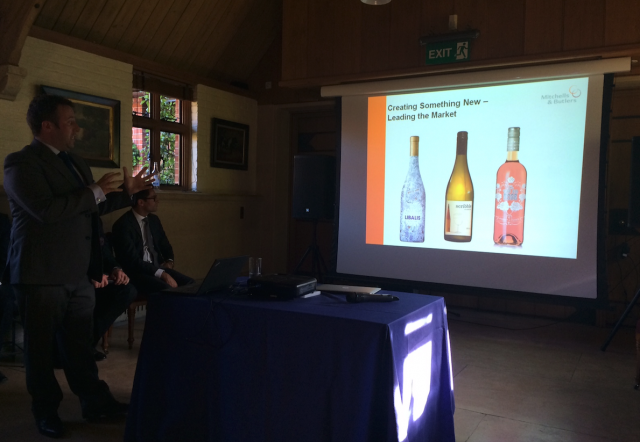 During the afternoon, Henry Boyes, wine manager at Mitchells & Butlers, presented his techniques for encouraging consumers to try new wines at the All Bar One chain. 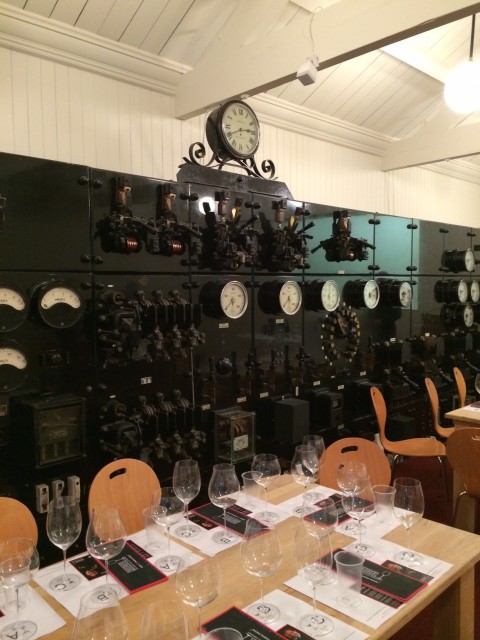 While Riedel conducted a comparative tasting in the Waddesdon “power room”, beginning with a Rupert & Rothschild South African Chardonnay in a plastic cup versus the same wine in a Riedel oaked Chardonnay glass, and then in a vessel specifically shaped for New World Pinot. 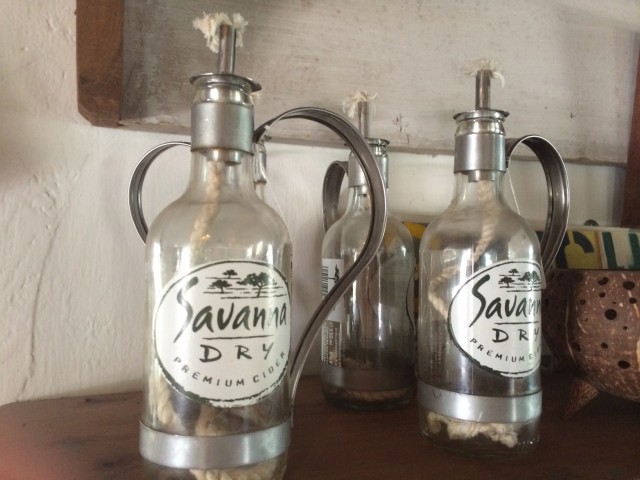 db spotted this original recycling idea for used bottles on sale in Tanzania – a handy way to find your way back from the bar after dark. Have you seen any other innovative ways to give old bottles a new lease of life? If so, please email a photo to editorial@thedrinksbusiness.com.

Nino Franco Prosecco hosted a sparkling evening of seafood matched with four if its DOCG labels at Fishworks in London, including three magnums of its Rustico. 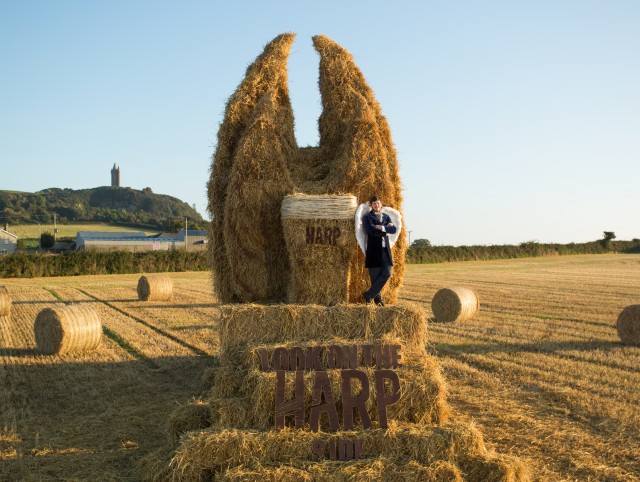 A pair of towering wings made from barley was unveiled by Northern Ireland’s Harp lager on the Ards Peninsula as the centrepiece to its new campaign “earn your wings”. The seven by four metre wings were made out of 250 bales of barley and 440 metres of twine. 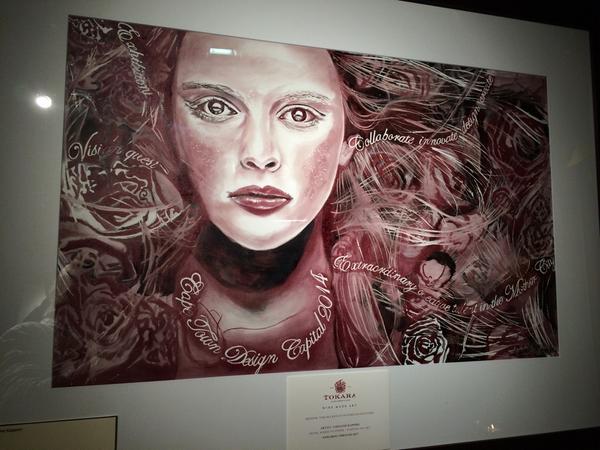 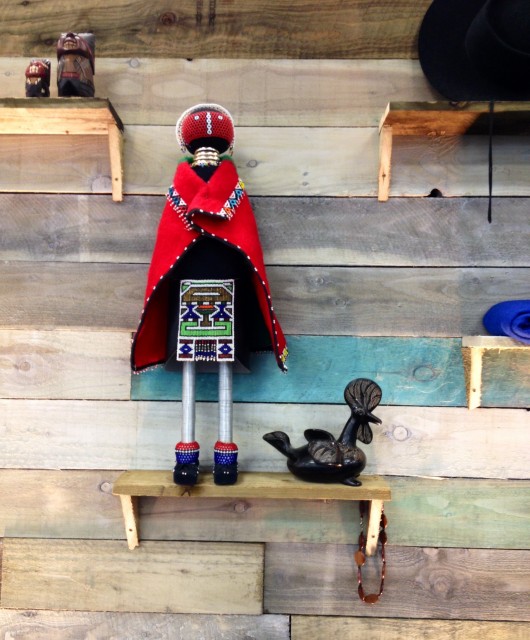