Berkmann’s Alex Canneti explains the pricing behind the famed Super Tuscan, and why Italy’s fine wines are stealing share from the French. 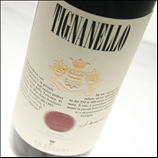 “And it’s under-priced for a reason, because the Antinori family don’t want it to be traded. They want to see it in restaurants all over the world from Los Angeles to Taiwan. Whereas Solaia is a more trade-able wine that’s given to négociants and sold sur place.”

Italian fine wine’s success has been at the expense of the French, reckons Canneti.

“It’s very much due to the failure of the Bordeaux fine wine market. A lot of people have turned to Italy because the pricing’s more stable and there are fewer wines to look at with your Sassicaia’s, Ornellaia’s and Tignanello’s. Compared to overheated Bordeaux, the prices make sense, and I think the wines are generally getting better.”

As for en primeur: “We wouldn’t have done it five years ago, now it’s a solid business,” says Canneti.

“We sell good volumes to the John Armit’s and Fine & Rare’s of this world. It’s been quite a sudden, big jump, and that’s because of the decline of Bordeaux.”