Prosecco’s explosive UK growth has not come at the expense of Champagne, which held its volume and saw value sales increase by 2.2%, according to the Lanson Champagne Category Report 2014. 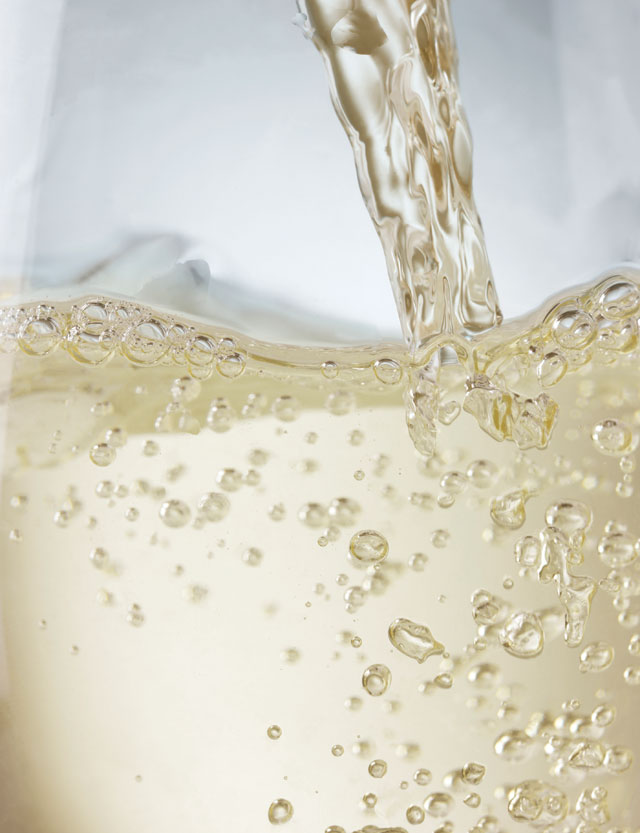 Both sparkling wine and Champagne enjoyed a particularly strong performance in the on-trade, especially restaurants. CGA Strategy data showed that Champagne saw overall UK on-trade growth of 3.5%, while sparkling wine rose by 7.3%, although from a considerably smaller base. The news ties in with a wider revival in the UK on-trade.

It was a more mixed picture in the off-trade, where Nielsen data pointed to a decline in retailer own label and exclusive label Champagnes, which pushed overall volumes down. However, overall value sales rose by 0.8% thanks to growth from the grandes marques and “boutique” Champagne brands, which increased value sales by 8.6% and 15.8% respectively.

Indeed, the report highlighted off-trade growth for the UK’s eight biggest value Champagne brands, which include houses such as Moët & Chandon, Veuve Clicquot, Lanson and Nicolas Feuillatte. As a result, it concluded: “Certainly the investment by Champagne houses in their brands continues to pay off – enabling shoppers to reach out for brands they trust.”

Analysing the off-trade performance of the sparkling wine sector, the report noted that growth was “entirely driven” by Italian sparkling, in particular Prosecco, which enjoyed 54% year on year value growth at a time when other countries’ sparkling wine sales remained relatively flat.

In direct contrast to the situation in Champagne, this charge was led by own label Prosecco, which has seen off-trade value growth of 90% over the past year.

However, despite the decline in retailer label Champagne at the lower end of the category, Futuresight data suggested that Prosecco’s rise was more closely linked to people trading up from other drinks than trading down from Champagne.

To support this claim, it provided data showing that the main category losing out to this rise in Prosecco sales was white wine, followed by spirits and rosé.“In short,” the report’s authors observed, “people are seeing Prosecco as an aspirational drink ahead of more commonplace alternatives” 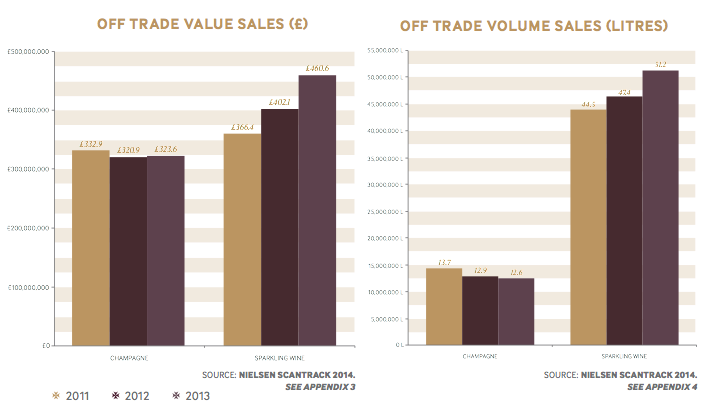 Mapping the popularity of both sparkling wine and Champagne by region, the report highlighted a lot of crossover, suggesting: “in many instances the Champagne and sparkling consumer are one and the same person, drinking both on subtly different occasions.”

However, it also identified typical Champagne consumers as being “of a higher social profile”, with a “bigger disposable income”, and a tendency to be “more conservative and more rural” than sparkling wine consumers.

In the on-trade, restaurants proved the most popular purchase environment for both categories, with sparkling wine performing particularly well in the less formal pub setting, but under-indexing in nightclubs. 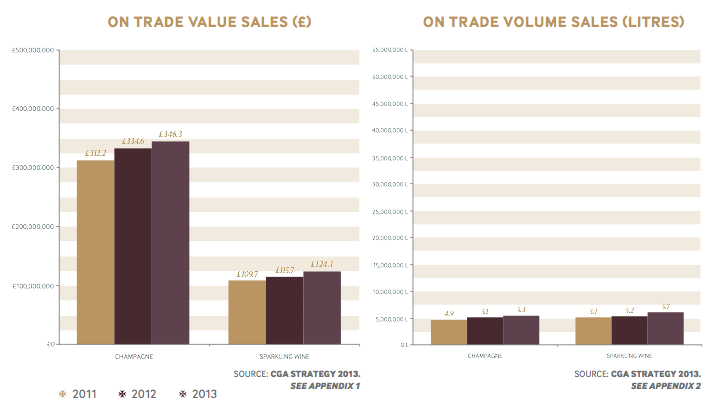 While sparkling wine’s lower price made it a more popular choice for serving at parties, Champagne proved twice as popular in the gift sector. It also retained its position as the most popular choice for more formal celebrations such as weddings, birthdays and events such as Valentine’s Day.

Commenting on the report’s findings, Paul Beavis, UK managing director of Lanson International, maintained: “we see the overall growth in ‘bubbles’ as a  good thing. There are demonstrably more similarities than differences between the sparkling and Champagne consumer, so the more people who enter the category in general the better.”

Nevertheless, he emphasised the importance of making clear to consumers the difference between Champagne and other sparkling styles, saying: “As brand owners we need to do more to enable people to trade up to Champagne when the occasion suits.”

Echoing comments made earlier this year by Andrew Hawes, managing director of Bollinger’s UK agent Mentzendorff, Beavis argued: “We need to better communicate our superior history, heritage  and quality stories. We need to remind people that on certain occasions Champagne really should be their ‘fizz of choice’ and enable shoppers to gravitate seamlessly from sparkling to Champagne.”