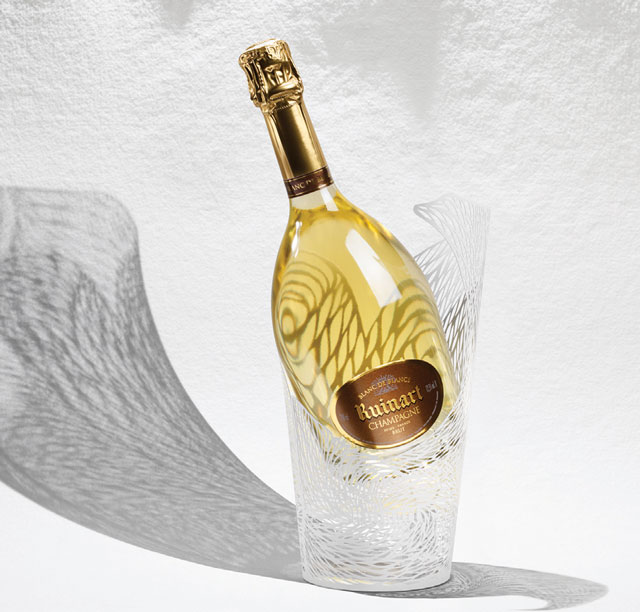 Champagne Ruinart has launched new limited edition packaging for its flagship blanc de blancs inspired by the house’s historic chalk cellars. Created by young Scottish artist and Royal College of Art graduate Georgia Russell, the latest design piece to be added to the Ruinart Collection is a contemporary interpretation of the house’s chalk quarries underneath the estate in Reims. Just 50 of the bottles will go on sale in the UK, with the launch taking place at the Masterpiece Art Fair, where Russell will also unveil a “spinning” paper sculpture representing the Grand Livre of Ruinart.

“This beautiful addition to our Collection reflects not only the splendour of our cellars but also the timeless elegance of our Champagnes,” Ruinart’s chef de caves, Frédéric Panaïotis, said. “Georgia Russell is a very talented young artist and we are delighted to be able to work with her on this project,” he added. 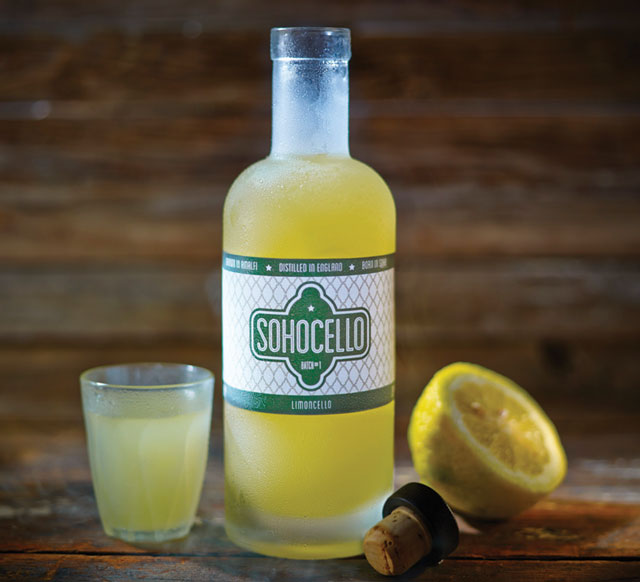 Grown in Amalfi, distilled in England and sold in Soho, this month brings the launch of Sohocello, the fruit of a collaboration between the ever-innovative lot at Herefordshire-based Chase Distillery and Soho newcomers Pizza Pilgrims. With just 1,000 bottles going on sale, the idea for Sohocello was first conceived by Pizza Pilgrims’ founders Thom and James Elliot during a trip to Italy in their Piaggio Porter van.
Driving in the hills above the town of Amalfi, the pair struck upon lemons with perfumed skins grown by an 82- year-old Amalfi native, Luigi Aceto, that had benefitted
from a unique combination of constant sun, a cooling mediterranean breeze and rich volcanic soil. Hand-peeled and macerated in small batches in Chase’s 96% Hereford potato spirit for a week, every drop of lemon oil is extracted, giving Sohocello its cloudiness. They hope the 29% abv drink evokes “the authentic taste of sunny days by the sea.” 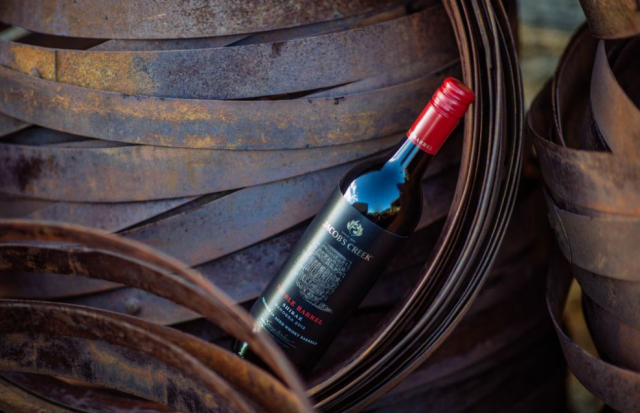 While whisky is commonly aged in wood from the wine industry, Jacob’s Creek has launched the opposite: a range of red wines aged in whisk(e)y barrels. Called Double Barrel, the launch follows two years of trials which revealed that the 2012 Shiraz from the Barossa complemented barrels formerly used to aged Scotch, while the 2012 Cabernet Sauvignon from Coonawarra was best suited to casks from the Irish whiskey industry.

Jacob’s Creek brand owner Pernod Ricard has an extensive supply of both sources of barrels due to its spirits business, which is comprised of Chivas Regal Scotch and Jameson’s Irish whiskey, among others. “Each barrel performs differently, so it took time to understand the true effect on the wines and achieve a result that was perfectly balanced,” said chief winemaker of Jacob’s Creek, Bernard Hickin, who believes the unusual ageing method has imbued the wines with “extra intricacy and smoother texture”. The pair are available across Australia from 1 July.

With Greek wines increasingly grabbing the attention of wine buffs, a sparkler made from native white grape Assyrtiko has hit the market. The 11% abv Santo Brut is made with Assyrtiko grapes from the village of Pyrgos in Santorini in the traditional method, with the second fermentation taking place in the bottle.

Hoping to reinforce the strength of “brand Santorini”, Santo’s president, Markos Kafouros, said: “With the arrival of Santo Brut, the premium grape variety of Assyrtiko goes to an ultra-premium category worldwide.” Santo Brut offers “elegant and persistent bubbles” along with an expressive nose of “white peach, honey and hints of honeycomb”. The palate, meanwhile, is “round and balanced with refreshing acidity and a long finish”, making it a great apéritif or match for sushi.

Illustrating the rewards of patience, the extended bottle ageing of this unoaked wine transforms its character. Made with Semillon grapes from old blocks of vines planted on their own rootstock in light sandy soils, Vat 1, which was first produced in 1963, is fermented in temperature-controlled stainless steel tanks before it spends a few years of rest in bottle.

The result, say its makers, is a “classic Hunter Valley Semillon with an aromatic nose and a tightly structured palate with considerable length and breadth of citrus-fruit flavours”. Give it a few more years and you’ll start to see toasty notes emerge.

The world’s oldest Tequila brand, Jose Cuervo, has launched a 100% blue agave blanco Tequila in the UK. Due to launch in the on-trade at the likes of Nobu and The Dorchester this month, as well as at Selfridges, Tradicional Silver is bottled immediately after being distilled.

The result, according to its makers, is a “fresh, spicy flavour with a hint of sweetness on the finish, vegetal notes and a background perfume of earthy cooked agave”. Using only agaves from the lowlands of Jalisco, Jose Cuervo Tradicional Silver is produced at the oldest working distillery in Latin America, La Rojena. 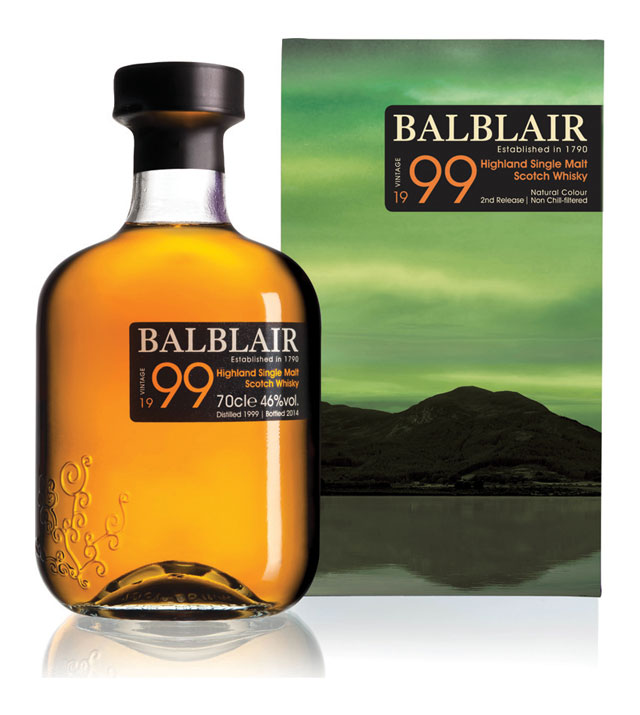 Highland single malt distiller Balblair has released its 1999 vintage onto the market. Each Balblair vintage is personally selected by distillery manager John MacDonald and is only released when he deems it to have reached its peak. According to MacDonald, the copper-coloured drop, which has been aged in ex-Bourbon barrels and Sherry casks, offers aromas of “honey, green apples, citrus fruits, vanilla and Christmas cake”, while the palate provides “hints of honey, vanilla and leather with a warm, smooth, long-lasting finish”.

Gillian Gibson, the distiller’s global brand manager, comments: “With hints of refreshing green apple on the tongue, the 1999 vintage is the perfect whisky to enjoy over the summer months.”

Following on from the successful re-release of Tanqueray Malacca Spiced Gin last year, Diageo has dipped into its history books for a second time with the launch of Tanqueray Old Tom Gin. Resurrecting the brand’s founder Charles Tanqueray’s 180-year-old recipe, Old Tom Gin has gone on sale at high- end bars and in specialist retailers. Each of the 100,000 bottles produced are individually numbered and feature a design based on an Old Tom label from 1921.

The recipe, based on Charles Tanqueray’s original, dates back to 1835 and is said to be “lighter” than a genever but “sweeter” than a London dry style. “Our hope is to inspire bartenders to bring authentic Old Tom cocktails back for a new generation,” said Tanqueray global brand ambassador Barrie Wilson.

Old Tom gin was popular during the 18th century but has experienced a renaissance with the recent classic cocktail boom.

In response to a growing demand from UK consumers for different styles of American whiskey, and with the Bourbon boom showing no sign of slowing, Maxxium UK has added Jim Beam Rye to its ever-growing stable. Jim Beam Rye is bottled at 40% abv and aged for four years in charred oak barrels which, according to its makers, has resulted in a “complex” straight rye whiskey that is “spicy, bold and full of flavour”, offering notes of “nutmeg, cinnamon, apple and pepper, and a slightly sweet finish on the palate”.

Maxxium suggests serving the rye neat, on the rocks or as a base for classic cocktails such as the Old Fashioned or Manhattan. “The thirst for good-quality rye is at a record high and we feel that the time is right to introduce Jim Beam Rye to the UK market,” said Maxxium UK’s marketing controller for imported whiskey Eileen Livingston. 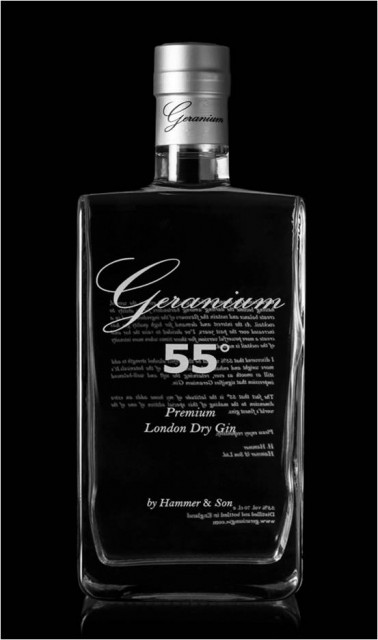 Based on the original Geranium Gin recipe, this 55 expression features fresh and dry botanicals of juniper, geranium, lemon, orange, coriander, cassia which have been matured for 48 hours and distilled in a 100-year-old copper still pot.

Henrik Hammer, of Hammer & Son Ltd, said of this latest expression: “55% is the perfect alcohol strength to add more weight and enhance the pleasantness of the botanicals, and still retaining the smooth and well-balanced impression that signifies Geranium Gin. The fact that 55° is the latitude of my home adds an extra dimension to the making of this special edition of one of the world’s finest gins.”