Large swathes of Bordeaux vines have been destroyed after two nights of hail storms, torrential rain and lightening swept across France. 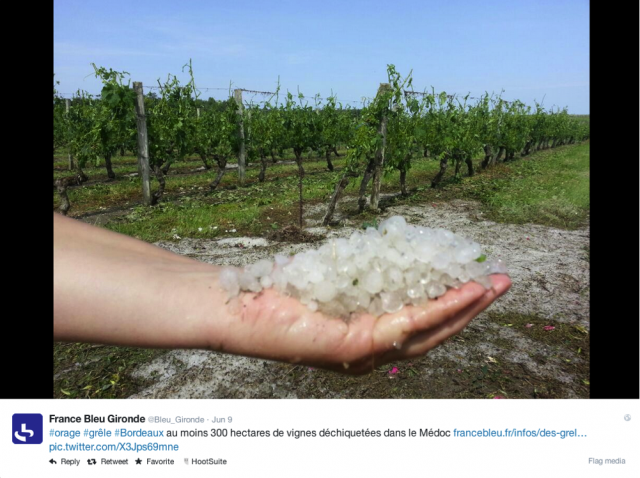 The Médoc appellation was one of the worst affected areas with around 300 hectares of vines completely decimated and up to 1,000 hectares in a further five regions; Prignac-en-Médoc, Ordonnac, Civrac, Blaignan and Saint-Yzans, badly affected, according to a report by francebleu.fr.

Storms, torrential rain and hail battered the region for much of Sunday and Monday evening, however the Météo France weather service lifted its orange storm warning, its second highest level, on Tuesday morning, as reported by the English French news site RFI.

According to reports, hail stones as big as 2cm in diameter hit much of Bordeaux, including the region of Blaignan where about 680 hectares of vines were said to have been affected.

Vineyards in Charente, the home of Cognac brandy, were also hit by hail and winds of up to 130km per hour, with many homes damaged, flooded and suffering power cuts.

So bad is the devastation that some winemakers are calling for officials to declare a state of natural catastrophe, allowing for those worst affected to claim financial aid to restore their crops.

A definitive assessment of the damage is expected to be made over the coming days.

The region of Bordeaux was badly affected last year following a series of hailstorms which destroyed entire crops of around 100 producers.