Environment has ‘profound’ effect on taste

The environment in which you experience a wine has a “profound” effect on how you will perceive it to taste, according to an Oxford University professor.

Speaking to the drinks business during an experiment into the effect of colour and sound on flavour perception, Charles Spence, professor of experimental psychology at Oxford University, said: “Lighting and music can act as digital seasoning for food and wine.

“Colours effect mood. Italian film director Federico Fellini famously painted his staff canteen red in order to fire up his actors to bring out their passion.

“A red room helps to bring out the fruity notes in the wine. In a green room meanwhile, the fruit profile of the wine disappears and the wine appears closed.

“If a red wine was coloured green, tasters would presume that it was more sour than is actually was, just because of its colour.”

Spence believes the classic tasting room – a white walled space with no music – is a bad environment in which to judge wine.

“It’s too harsh and will make the wines seem more bland. Professional tasters should consider their environment more seriously when they are judging wines,” he told db.

“Bars are increasingly thinking about ways environment can enhance the tasting experience, taking everything from lighting to glassware into account,” he added.

Spence is working with a number of large spirits companies and microbreweries on ways to incorporate colour and sound into the taste experience.

He has noticed that winemakers are starting to take the idea of the effects of their environment on the blending process more seriously. 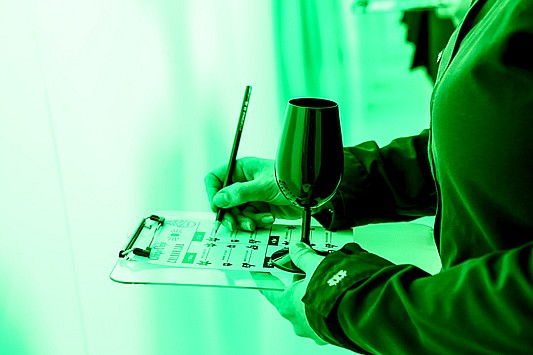 “One of Campo Viejo’s winemakers, Roberto Vicente, is keen on the idea of painting his blending room red and playing soothing music in order to help him in his decision making process and blend the best possible wine in the moment,” he said.

While music has less of an effect on taste perception than colour, Spence is convinced that different types of music influence our taste buds.

“Music shouldn’t effect taste perception and is harder to explain, but it does. Colourblind tasters experience huge changes in flavour perfection when different kinds of music are played,” he told db.

“Wine is described in a similar way to music, as having different ‘notes’. Citrus flavours are seen as high notes, while wood and chocolate are low notes.

“We’ll start to see more producers putting music recommendations on their back labels,” he added.

Over 3,000 of those visitors took part in the Colour Lab, which explored how sound and colour affect taste perfection, making it the largest multisensory experiment of its kind.

While the experiment only explored the affect of sound and colour on the taste of Campo Viejo Reserva 2008, Spence anticipates the same results for white wine.