Everton FC have signed a landmark deal with premium Thai lager brand, Chang Beer, having sponsored the club for a record 10 seasons. 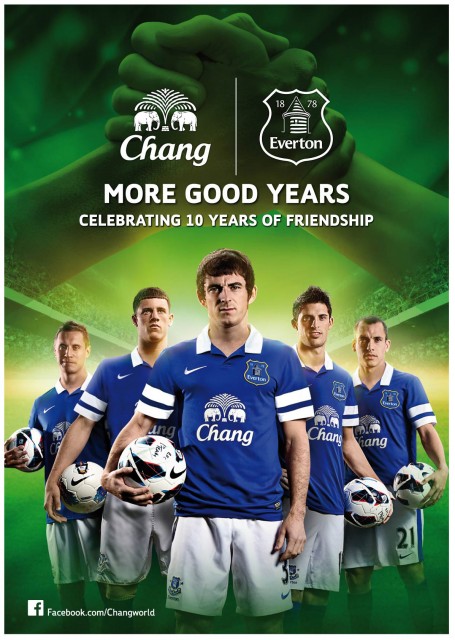 The team will continue to wear the Chang elephant logo on their shirts for the next three years, making theirs the longest running shirt sponsorship partnership in the Barclays Premier League.

The beer brand first signed with the club in 2004 with the club now having worn worn the Chang brand for 10 seasons, renewing its partnership on four separate occasions.

Geoff Tirrell, general manager of Chang Beer UK, said: “We’ve seen Everton FC grow consistently over time, with this season’s league table being one of the strongest in recent years, and are proud to continue supporting the team. The extension of our deal with Everton, signing a landmark deal for the longest running shirt sponsorship in the Barclays Premiere League, demonstrates the continued success of the partnership and the firm friendship which we continue to build.

“Through this partnership we hope to continue to build brand recognition in both the UK and worldwide.”

Elstone said: “Everton has enjoyed a special relationship with Chang extending now for ten years. In that period, we have grown to understand one another, delivered great work, helped achieve objectives and developed a truly great partnership and, indeed a friendship, based on mutual trust, respect and affection.

“We do not take our partnership and all that we have achieved lightly. Everton is very proud of our mutual success to date.”