Blanchette offers a snapshot of France viewed from a rose-tinted prism, with Gérard Depardieu and Vanessa Paradis playing starring roles, the former grinning over a bubbling stockpot on the cover of his cookbook and the latter staring seductively from the confines of a seven-inch propped up on a vintage dresser. 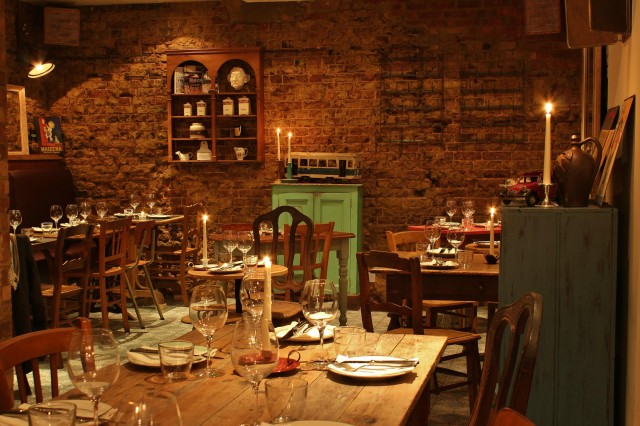 With its exposed brick walls, tiled floor, flickering candlelight and mismatched furniture seemingly pilfered from a La Rochelle brocante, Blanchette does cosy comfort incredibly well, with oodles of atmosphere and an effortlessly cool soundtrack thrown in for good measure. With consultancy from the Salt Yard Group, Blanchette is a neighbourhood restaurant in the best possible sense with a flair for gooey cheese and truffled charcuterie.

The brainchild of three French brothers: Malik, Maxime and Yannis, the tiny Soho eaterie opened on d’Arblay Street late last year. Given the proliferation of no bookings restaurants in the vicinity, Blanchette’s against the grain bookings policy is a genuine joy. Split in two, up front is a bar with wobbly wooden stools and a quaint mosaic of pastoral scenes painted on Art Nouveau tiles that serves as a backdrop to the action. The restaurant proper lies to the rear, where wooden tables are arranged disconcertingly close to one another, making it tantalisingly easy to earwig.

To get the best out of Blanchette, begin with an apéritif and snacks at the bar then migrate to a table at the back. The buzz of the bar offers an edgier experience and the snacks are scandalously cheap, with none edging over the £4.50 mark. Dining with an author friend, we begin with cocktails.

My Amaretto Sour is as fine as anything you’d find at the likes of the Experimental Cocktail Club or one of the Big Smoke’s many speakeasy-style bars.

A trend I’m hugely glad to see mushrooming, restaurants worth their celery salt know they can no longer get away with a sub-par cocktail offering. Once little more than an afterthought, the likes of Jason Atherton have done much to raise the standard of the restaurant bar, which makes ordering an apéritif less like a game of Russian Roulette.

To further whet our appetites, we order a selection of bar snacks, from deliciously decadent duck rillettes tempered by tangy cornichons, to croquette-shaped beignets that oozed with silky cheese in a Proustian mouthful of molten loveliness given texture by the accompanying onion compote.

Discs of fatty foie gras meanwhile, were sprinkled with rock salt and boasted paprika-dusted rims that added a kick of heat and a touch of Moorish exoticism to this most French of foodstuffs.

Migrating to a tiny table in the main restaurant, our friendly waitress explains that the dishes are designed to be shared, which suits me fine as I’m greedy by nature and prefer a lot of a little rather than committing to a main course. Blanchette goes big on comfort food. Much to my delight, cheese features heavily on the menu, weaving its way into a surprising number of the dishes. Fat spears of crunchy asparagus are therefore accompanied by curls of nutty Comté in an odd but inviting union.

Served in its shell, a solitary scallop is easily the best I’ve ever eaten, having been baked and mixed with a medley of crispy fried veg doused in melted “Café de Paris” butter. Strips of seared tuna meanwhile, were sashimi like in their freshness, the glistening flesh watermelon pink and flavour redolent of the sea, with a pepper crust adding texture and spice.

Fries were, of course, French. Lacking the crunch of the triple cooked chips increasingly offered on menus after Heston Blumenthal made them a staple, the best thing about them was the tiny pot of accompanying béarnaise sauce, which I could have quite happily devoured on its own.

Shunning the sweeter side of the dessert spectrum for yet more cheese, my trio of tangy Bleu des Causses, gooey Camembert and salty Selles-sur-Cher sent me out into the Soho night stuffed as a foie goose and with a smile wider than Dépardieu’s waist.

The 40-bin, French-focused wine list seems fitting for such a Francophile joint. Our chosen poison, Le Grand Noir 2012, a blend of Grenache, Syrah and Mourvèdre from the Languedoc was charming in its rustic simplicity, all pepper, warming spice and bramble fruit with a velvety palate and liquorice finish.

The beauty of Blanchette is that it knows exactly what it wants to be. It isn’t trying to take cooking in an unusual direction, nor has it fallen prey to ticking trend boxes.

What it does do instead is deliver expertly executed classic French fare in convivial surroundings for almost indecently cheap prices for the centre of London.

There is something irresistibly likeable about Blanchette – I defy you to go there and not have fun. With new restaurants opening in town at an alarming rate, the dizzying array of choice makes it easy to never visit the same place twice, with the thrill of the new winning out over the familiar. I feel differently about Blanchette and am genuinely excited about returning for part deux.