British brewer Badger has released a stinger of a new beer brewed with nettles to herald the arrival of spring. 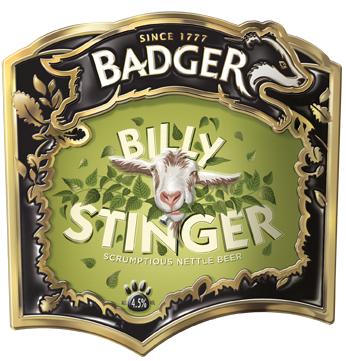 According to its makers Billy Stinger has a “gloriously grassy aroma” with “deliciously refreshing herbal flavours.”

Head Brewer Toby Heasman said: “Billy Stinger is brewed with nettles and has a subtle herbal character that lingers on the palate, so it’s great paired with a fragrant Thai curry or Asian-style fishcakes, but also works just as well with a succulent roast lamb for Sunday lunch.”

The brew is made with Dorset spring water naturally filtered for up to a century through the Cretaceous chalk downs and drawn up 120ft from the brewery’s own wells.

Hall & Woodhouse has been brewing Badger ales in Dorset since 1777 and its brewery is now managed by the fifth generation of the Woodhouse family.

The 4.5% beer will be available in all Hall & Woodhouse houses throughout the estate during April and May 2014.