An Australian man reacted to a bite from one of the world’s most poisonous snakes by saying: “If I’m going to cark it, I’m going to have a beer.” 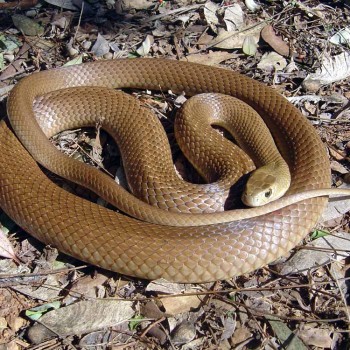 Rod Sommerville from Queensland was bitten in his garden by an eastern brown snake, which has the second most toxic venom of any land snake in the world and is responsible for more deaths in Australia each year than any other snake.

After hitting the snake on the head with his spade, Sommerville called an ambulance and opened a beer while he waited for it to arrive, making sure not to wake his teenage son who was asleep on the sofa.

“I said to myself, if I’m going to cark it I’m going to have a beer, so I got a Goldie out of the fridge and drank that, he told the Rockhampton Morning Bulletin. “If you panic it makes it worse.”

Having arrived in hospital, Sommerville suffered an allergic reaction to the anti-venom, keeping him in hospital for the last three weeks.

“The reaction nearly killed me as well, so it was a double whammy,” he told the paper.

Earlier this year a New Zealand man who had been bitten by a shark dropped into the pub on his way to hospital.