It’s been the usual busy, exciting, and at times tumultuous twelve months of restaurant openings and closings for Hong Kong in 2013, writes Jonathan Maloney

As is the norm, departing restaurants are rarely mourned for long as space is primped and preened for new arrivals.

From buzzing dining bars to fine-dining Cantonese, the city has seen a wide range of restaurant openings in 2013.

It was a tough job whittling it down to only ten, but here are some of our favourites from the last 12 months. 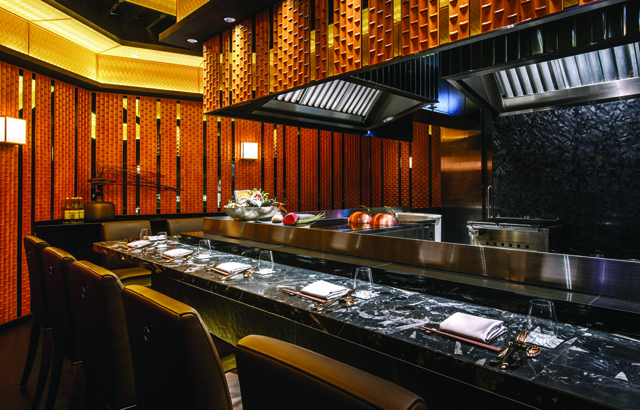 The star of the three restaurants opened by Lai Sun group in the backstreets of Wan Chai this year, the exclusive and intimate Wagyu Takumi seats just 12 around its L-shaped bar.
Chef Konishi’s background is FrenchJapanese cuisine, and while the setting appears to be one of a teppanyaki restaurant, the menu is anything but.

Highly conceptualised, you are just as likely to sample abalone, sea urchin, and wagyu beef, as you are celeriac, foie gras, and pigeon. The experience is not inexpensive, but then innovation and quality rarely ever are. 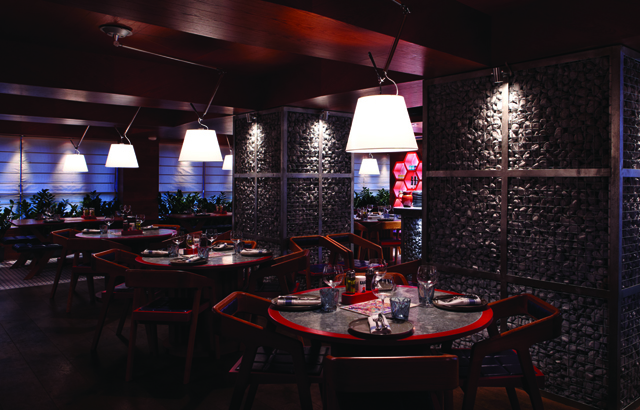 Hong Kong has long been starved of good Greek restaurants. There are one or two exceptions but in general, fans of Hellenic cuisine are sorely uncatered for in the city. With red honeycomb patterns and lattice partitions throughout the restaurant, the main floor includes both small intimate tables as well as longer benches for larger groups – on the whole the setting is a warm, welcoming one perfectly suited for dates as well as laid back group dining.

With a diverse menu rarely seen at other restaurants, Souvla has a lot to offer: goat meat flatbread wraps; pan-fried Greek cheese served with fig marmalade; glacier 51 toothfish – the menu goes on. It’s a fun, playful take on contemporary Greek cuisine and one that the city deserves. 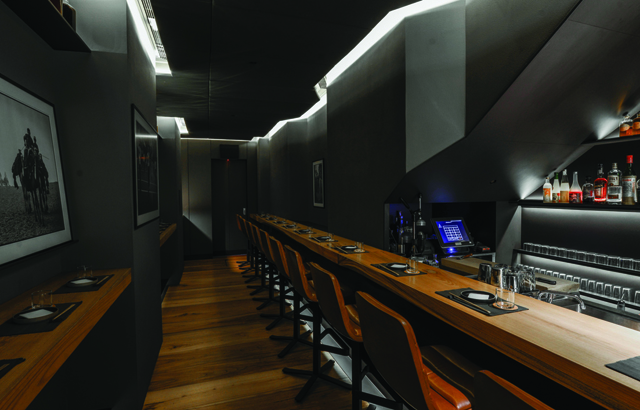 Nestled in the middle of tiny On Wo Lane and fronted by anonymous slate grey walls, Ronin is conspicuous in its lack of fanfare and loud music that has come to typify sister restaurant Yardbird by Matt Abergel and Lindsay Jang.

Ronin is an extension of Abergel’s Japanese-inspired culinary talents, and sushi and fresh seafood are the stars here. It’s not classic Japanese cuisine by any measure, but it is immensely fun – and while you’re there – don’t forget to sample some of what is Hong Kong’s largest selection of Japanese whiskies. 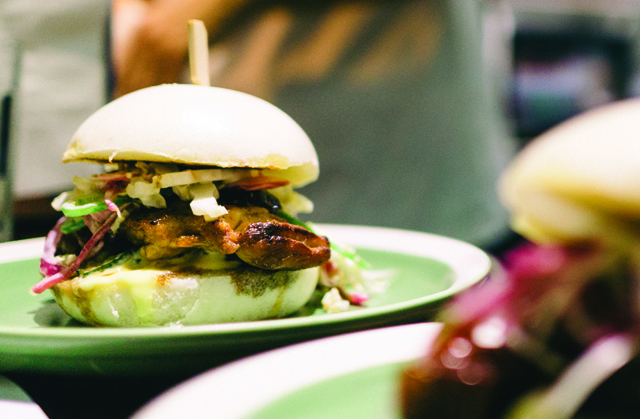 From humble beginnings selling Momofuku-inspired Chinese burgers at organic street markets to helming one of the city’s hottest new restaurants, chef May Chow has successfully managed to blend a balance of traditional and cutting edge chic in her menu. The former Bo Innovation and Yardbird chef mixes up mostly Cantonese but also Japanese and Thai ingredients and techniques to put out bold, fun flavours in a boisterous, relaxed atmosphere.

The stars of the menu are undoubtedly the baos: chicken, fish, pork belly, and vegetarian at the time of writing, but dishes such as the pepper miso clams, eggplant and shiso tempura, and deep fried green tea bao for dessert all pack a punch and stand on their own. It’s fun and hip, and undoubtedly does make you wonder why you don’t see chefs having this much fun with Cantonese cooking elsewhere in the city. 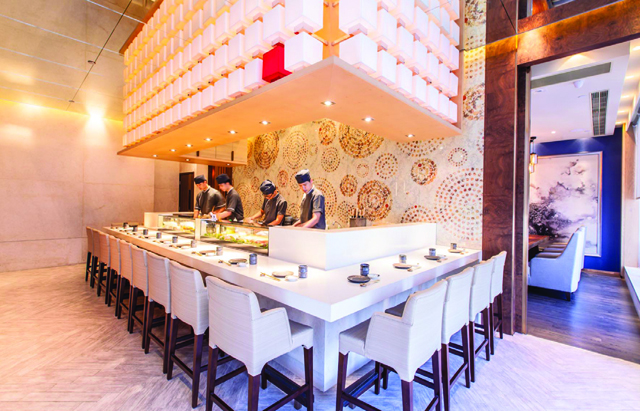 Tucked away in an obscure building, Kishoku features chefs who trained under renowned chef Kimijima at Sushi Ta-ke just a stone’s throw away on the other side of Causeway Bay. The interior is at first reminiscent of an Asian take on a high-end brasserie, but once you reach the sushi bar it becomes clear that they take sushi very seriously here.

Sushi, sashimi, and omakase are the order here: prices for the Ki, Sho, and Ku set menus begin at around HK$1,200 and work their way steadily up from there. Make no mistake: this won’t end up being a cheap meal, but sushi of the highest order rarely is – just make sure you to notify your chef of any food allergies or preferences before you begin. 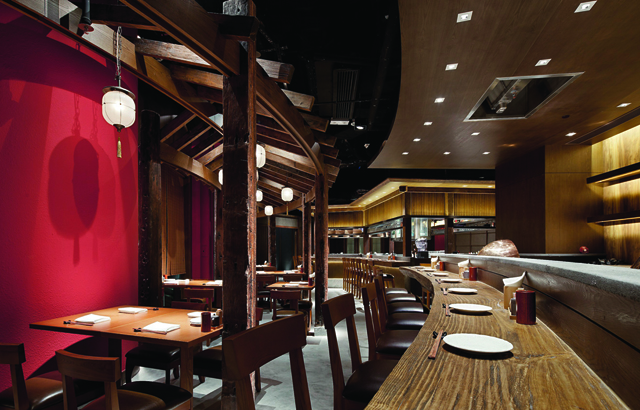 From the group behind the restaurant made famous by Quentin Tarantino’s Kill Bill film comes Gonpachi, located in the space formerly occupied by Lawry’s and now shared with An Nam. Dark wood panelling, lantern lights, and temple decorations provide a muted version of the Tokyo restaurant.

Gonpachi specialises in skewers and soba, but the menu also includes tempura and sushi. Highlights include an Asian version of bagna cauda: raw vegetables served with a fondue of Shanghainese hairy crab roe; as well as the Japanese short ribs seasoned with miso and garlic. But one cannot leave without sampling the soba – fresh batches are made daily in a special soba-making room. 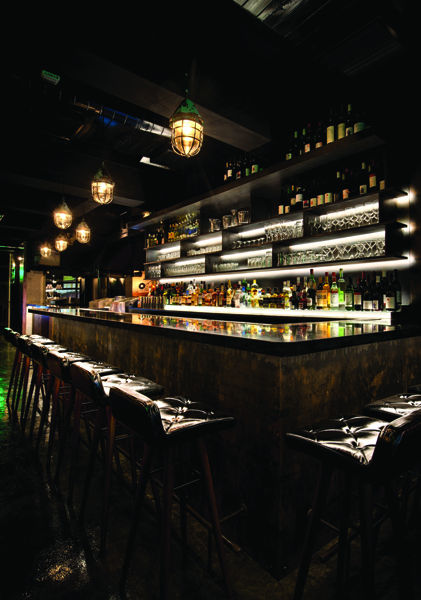 After the success of New York City’s Fatty Crab, it was only natural for its owners to bring its namesake to Hong Kong’s shores, particularly with the wave of New York-inspired restaurant openings.

Fatty Crab is also a Meatpacking-style bar with some truly excellent cocktails.

Brash and loud, Fatty Crab proves you can bring style to something as simple as street food. 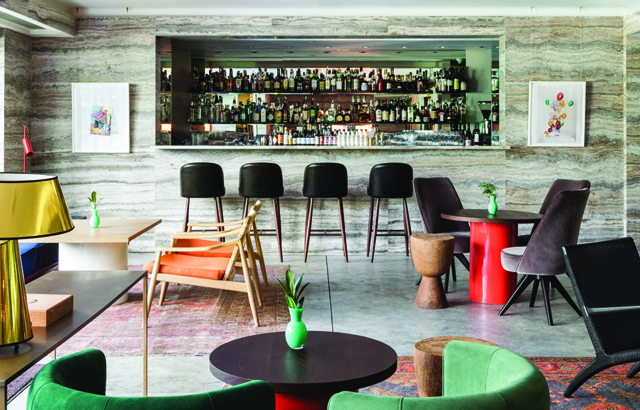 Duddell’s is one of the more unexpectedly successful restaurant openings in 2013 for it is relatively conventional at heart – a Cantonese restaurant. What sets it apart is that it is a bar, fine-dining Cantonese restaurant and art gallery rolled into one exquisite space made up of clean lines and bare wood.

Executive chef Siu Hin-Chi, formerly of Michelin-starred T’ang Court at The Langham hotel, serves up a wide range of Cantonese classics using premium ingredients such as Kurobuta pork and Kagoshima beef. If you’re looking for a Chinese restaurant with contemporary design and Western sensibilities – you need look no further. 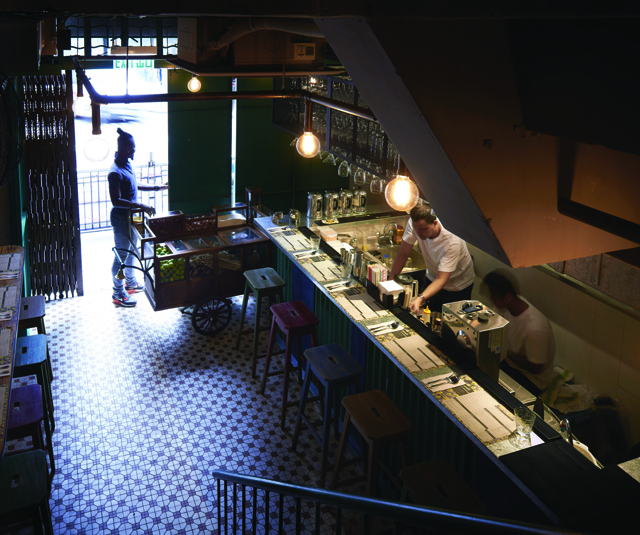 Located at the beginning of buzzing Hollywood Road just below the hip Tai Ping Shan area, Chachawan boasts a raucous, fun atmosphere with young, attractive waitstaff and a thumping soundtrack – and yet another addition to the no-reservations, so hip-it-hurts restaurant school.

The menu is predominantly drawn from Isaan Thai cuisine – or the northeast of Thailand – which favours drier, spicier dishes over the heavy, coconut milk-laden sauces of central and southern Thailand, cooked by 26-year-old chef Adam Cliff, who cut his culinary teeth at Bangkok’s Bo.Lan and Nahm.

Papaya salads, grilled meats and seafood, along with modern takes on Thai classics ensure the buzz about Chachawan is justified – just be prepared to queue for it. 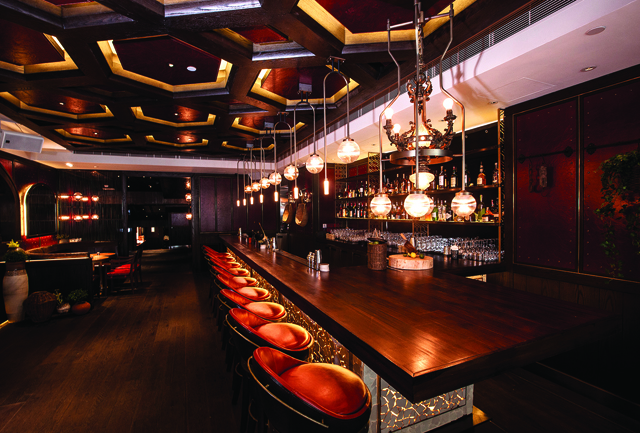 Behind the deceptively conventional walls of an office block lies some of the best modern Catalan cooking to be found in the city.

Executive chef Alain Devahive Tolosa, with 10 years under his belt working at El Bulli, is backed by team of chefs from Arzak, El Bulli, El Cellar de Can Roca, and Mugaritz. As if that wasn’t enough, Ferran Adria himself made an appearance just prior to the restaurant’s opening in April.

Catalunya features dark heavy woods and dim lighting: it’s moody and deliberately sexy but the menu and produce are where the restaurant really comes into its own.

Highlights include the ubiquitous spherical olives, Mediterranean red prawns, “chocolate textures”, and a wine list featuring some of the most celebrated Spanish labels.