Is there a correlation between great Super Bowls and great fine wine vintages? 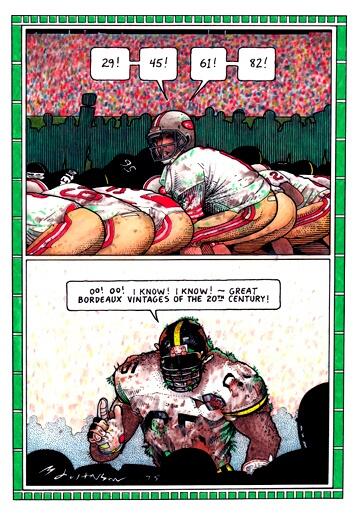 The simple answer is, “No. Of course not, how could there be? The conditions for a great vintage are built around many varied and complex factors not least of which is the weather and that is not dictated by a bunch of men fighting over an inflated pigskin on artificial turf somewhere in the US. You’re an idiot.”

Which is true but there are châteaux owners in Bordeaux, including Christian Moueix, who think that if the wind blows in the right direction on Palm Sunday it augurs well for a good harvest.

My interest in this palpably nonsensical and fabulously geeky question was piqued while researching the best craft beers for the “Beer Bowl” guide this week, in an ill-disguised bid to cater to my rather niche interest and still call it “work”.

All the indications point to Super Bowl XLVIII being potentially one of the greats.

Broncos quarterback Peyton Manning will either get his second ring and be hailed a living legend – good for him – or the young Seahawks team will win a first franchise Super Bowl, Russell Wilson will step into line as a future great and Richard Sherman gets to prove that he is indeed “the best corner in the game” – good for them.

Anyone who gets involved with gridiron quickly realises how much statistics, facts and comparisons play a part in the reading and enjoyment of the game.

“Super Bowl week” – as the run up to the big game is known – is renowned for endless reams of chat about the same topics – usually pointless – so I thought I’d throw my own bit of stat-mashing speculation into the mix and see where it got me and besides I found the lead cartoon which I needed to use somehow.

I learnt as I worked that this year’s showdown features the fewest players on either team to have played in a Super Bowl at all since 1982.

Only four players, all Denver Broncos, have played in Super Bowls and none of them with their current team (Manning and Jacob Tamme with the Colts, Wes Welker with the Patriots and Dominique Rodgers-Cromartie with the Cardinals) and only Manning has ever been on a winning team at a Super Bowl (with the Colts in 2007).

Being just a blossoming young NFL junkie, lacking an American heritage and its in-built sporting cultural touchstones and for many years the game being broadcast past my bedtime, I had to rely on the opinions of others for what constituted a “great” Super Bowl.

Luckily, a quick but comprehensive comparison of “the best of” lists on Fox, Sports Illustrated and the Bleacher Report showed some pretty clear consistencies (probably because they copied one another).

Not the best string of vintages but not bad either. Funnily enough what we also see is one great Super Bowl a decade until after 2000 when things get more serious, players get better looked after, the whole shebang becomes more professional and suddenly the number of “games of the century” go up – where else have we seen this before?

“So clearly,” I hear you cry, “your tangential evidence and general analogy sucks.”

Yes, but this is my game and I can rig it any way I want. After all, that was just using Left Bank Bordeaux as an example.

But get with it people, the fine wine-collecting world isn’t obsessed with Bordeaux anymore. Have you not been reading all my fine wine reports week after week?

Bordeaux’s out, Burgundy, Champagne, Napa and Italy are in, wide receivers are taller, kickers may become defunct and quarterbacks now run the ball. Time moves on, guys.

So if we park our peepers on Robert Parker’s handy vintage chart, which is somewhat similar to a wine gold standard, we can do this.

1979 can be a Barolo because Italian wines are hot right now and tannin-heavy Nebbiolo needs a good 30-40 years to be at its best, 1991 we’ll flip and turn into a vintage Port or, even better a Napa Cabernet which in ’91 were rich and succulent with great ageing potential.

Now 2002 should be a stylish Côtes de Nuits, lets say a Gevrey-Chambertin, as it’s a classic in a run of great vintages Burgundy enjoyed in the late ’90s/early 2000s.

2004 can be a Bolgheri Super Tuscan as the wines were fabulous, up there with the 1997s and 1999s. And there you have it, a fantasy fine wine portfolio to make you weep with envy.

So when faced with our new, multi-regional Super Bowl cellar you can clearly see that I have a point. A great Super Bowl means great wine.

Buoyed by this success I wondered if my, so thin it’s anorexic, parallel worked equally well in reverse. If great Super Bowls mean great vintages then Super Bowls that suck lead to rubbish vintages, right?

Going back to my sporting oracles it was a massacre. The three sources were more varied this time. They did agree that 1971 and 1993 were poor games (and they were so-so vintages particularly ’93 – in Bordeaux, I know it was great in Napa but that doesn’t fit my theory. These are my rules remember).

My theory lay in blood-spattered ruins all around. Now I could have just ignored this but then I spotted another pattern. In all four of those games the Denver Broncos and Seattle Seahawks had played.

They then won the ’99 Super Bowl by stuffing the Atlanta Falcons 34-19 and the Seahawks lost their first and so-far only Super Bowl to the Steelers in 2005 21-10.

The cynical among you will look at this incredible coincidence and say that the presence of these teams means it’s going to be a god-awful game but, if we’re lucky, a terrific vintage.

I will confidently predict this. I can’t say who’ll win (go Hawks) but it will be a fantastic ball game and, some region, somewhere in the world will have a vintage to rule them all.

Remember you heard it here first. 2014 will be brilliant for at least one wine region in the world and my hare-brained theory will be vindicated.

And if it doesn’t happen? Well, what can I say? Either way I win. You really believed there could be any possible connection between a sport, meteorology and wine! Are you crazy?

My rules, sports fans, my rules.

*note: anyone looking at the featured image who wants to complain that the Bears and Texans have never faced each other in a Super Bowl, I know it was the best line of scrimmage shot I could find that’s all.