Three new Master Sommeliers have been named out of 24 international candidates who sat the exam in London last week. 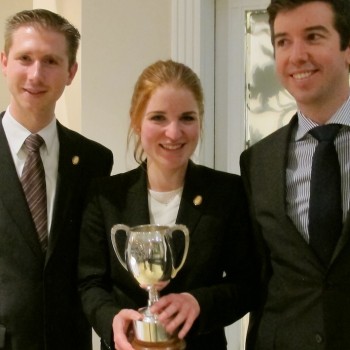 The latest holders of the sommelier profession’s highest qualification are Kathrine Larsen of Denmark, who works at Zuma in London; Aristide Spies from Belgium, who can third in the ASI Best Sommelier in the World 2013 competition in Tokyo; and Sebastien Crowther from Australia, whose wine list at The Royal Mail Hotel won the country’s 2012 Wine List of the Year.

The 2013 London exams attracted candidates from Singapore, Australia, Mexico, Greece, Germany, Belgium, Switzerland, Canada and France. The UK was also well represented, with sommeliers from The Savoy, The Ritz, The Ledbury, The Fat Duck, Medlar, Northcote Manor, Zuma and Dinner by Heston Blumenthal.

Organised by the Court of Master Sommeliers, the exam features three sections: restaurant services and salesmanship, a theory test covering all aspects of the wine, spirits, beer and cigar industries, and finally a blind tasting. Candidates cannot apply to sit the exam but must instead be invited to join the Master Sommelier study programme.

Just 214 individuals have been awarded the qualification since it was created in 1969, including a total of eight new additions this year. In July, the US exam sitting saw just one out of 70 candidates emerge successful in the form of Nick Hetzel, from Sage at the Aria Resort and Casino in Las Vegas.

Last month also saw the UK take first place in the 2013 International Best Young Sommelier Competition, sponsored by the Chaîne des Rôtisseurs, which was held in Washington DC on 18 October.

Loic Avril, aged 27, from The Fat Duck in Bray pushed 32 year-old Bobby Controy from Benu in San Francisco into second place, while Jarrod Mills, also 32, from Est Restaurant in Sydney came third. This is the third time since the competition was established in 2007 that a UK contestant has won.