A Hello Kitty Champagne is set to be launched onto the global market after making its debut at the Hong Kong International Wine & Spirits Fair last week.

The fizz, called Cuvée Spéciale and created by Champagne M.Hostomme, is a demi-sec rosé Champagne made of 50% Pinot Noir, 30% Pinot Meunier and 20% Chardonnay.

The product is the brainchild of Dutch entrepreneur Paul Herman, who approached Hello Kitty’s Japanese makers, Sanrio, for a licence to create the world’s first Hello Kitty branded Champagne.

“I thought this character was just for 5-10 years olds until I saw a Hello Kitty launch party in LA hosted by Paris Hilton and Beyoncé,” Herman told db.

After travelling throughout Asia, and particularly Japan, for the past 25 years, Herman has come to know the market intimately and is in no doubt that the fizz will be a hit. 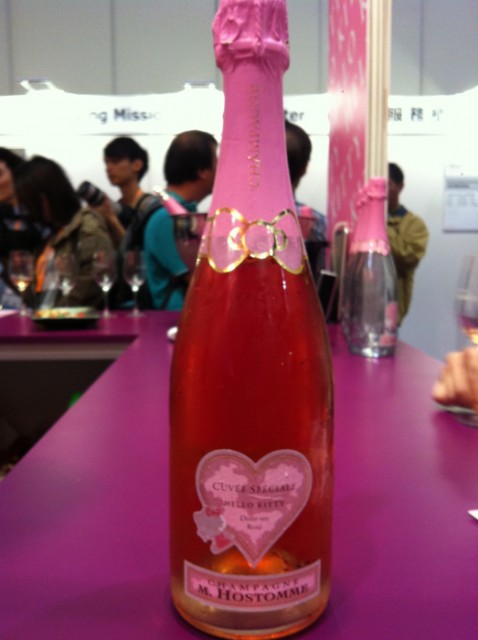 “People think Japan is the main market but actually Hello Kitty’s popularity is very widespread. Thailand is the number one – that and Hong Kong. She’s very popular in lots of countries around the world. It’s amazing,” he said.

Given the mascot’s popularity in Hong Kong, it is fitting that Herman chose to launch his new venture at the Hong Kong International Wine & Spirits Fair, which closed last Saturday.

“I approached Sanrio last year, and they gave me the global license. It was quite a long process, and we needed to get Sanrio approval every step of the way. It’s the first time there’s been a Hello Kitty-branded Champagne,” he said.

Herman came up with the idea at last year’s VinExpo and since then has been working tirelessly to get Kitty-chan, as she’s known in Japan, onto the bottles.

Cuvée Spéciale is bottled with 16 individual labels designed by Japanese artist, illustrator and designer, Hiro Sugiyama. Herman has a distribution agreement in place in Japan with the Yamaya chain of liquor stores – 400 in all – and is in Hong Kong to promote his product and secure distribution elsewhere in Asia and around the world.

So far, he’s seen a lot of interest from restaurants and expects that the bottles will become collector’s favourites.