US wine consultant Paul Hobbs has described his latest winemaking venture in Armenia as “the most difficult project I’ll ever do in my life.” 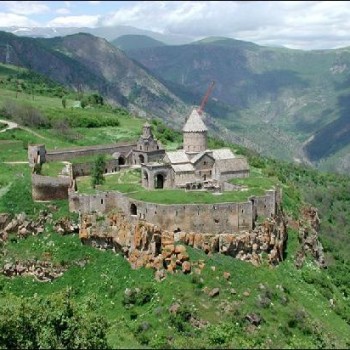 Speaking to the drinks business, Hobbs outlined the details of this enterprise, in which he took a 50% stake after being approached by the Los Angeles-based brothers Vahe and Viken Yacoubian. Inspired by their own love of wine, the businessmen wanted Hobbs to help them resurrect the ancient viticultural heritage of their native Armenia.

Spring 2014 will see the team being planting 18 hectares of vineyard near the village of Aghavnadzor, which lies around 40 kilometres north-east of the Armenian capital, Yerevan.

Describing the “fairly steep grade” vineyard, which lies at around 1,400m altitude, Hobbs outlined a plan to plant a “a little local stuff”, but stressed the quality-led decision to also bring “new material from France and the US” as part of his plan to include some Bordeaux varieties in the project.

Although the team has installed its own weather monitoring systems in order to build a more accurate climatic picture of this isolated area, Hobbs suggested to db that Bordeaux varieties would offer the thick skins required to thrive in this “very dry and high elevation” area.

However, he indicated that Cabernet Franc was likely to provide the main focus as “it might be too cool for Cabernet Sauvignon”, although Malbec and Chardonnay are also set to feature. “We’re even trying some Pinot Noir,” added Hobbs. “We know so little about this area.”

Despite his belief that the overall climate “is going to be very good” for high quality viticulture, Hobbs acknowledged: “winters could be a problem; they can be very harsh.”

Explaining the background to this partnership, which has seen Hobbs add a seventh country to his consulting portfolio, he remarked: “It takes a certain demeanour to go to these remote areas. They’d seen my international work in Argentina and we hit it off.”

While the venture has its own full time dedicated team, Hobbs explained his own role as being to “provide expertise and information on the market.” Looking ahead to the commercial prospects for this as yet unnamed winery, he predicted: “Russia will be a big market for us.”

Commenting more generally on whether he would be tempted to extend his consulting work into other emerging regions, especially potential powerhouses such as China or India, Hobbs told db: “If I get a serious invitation then I’d certainly take a look at it.” However, he stressed his “personal limit” of involvement in no more than 35 projects at any one time.

Hobbs is not the only high profile winemaking consultant to have become involved with an Armenian project. Michel Rolland is already bringing his own expertise to Armavir Vineyards in the west of the country, which released its first commercial vintage in 2010.