A collection of rare photographs showing German pilots from the First World War enjoying Champagne-fuelled parties has been unearthed. 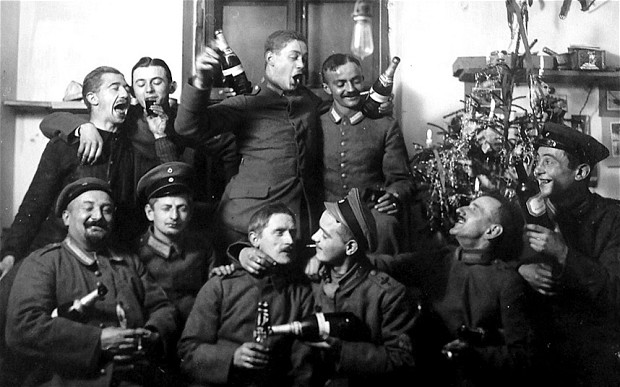 The find, comprising some 130 photos, was discovered in Essex by a man searching through personal effects bequeathed to him by a relative.

It is thought that they may have come into the possession of a British soldier at the end of the conflict. 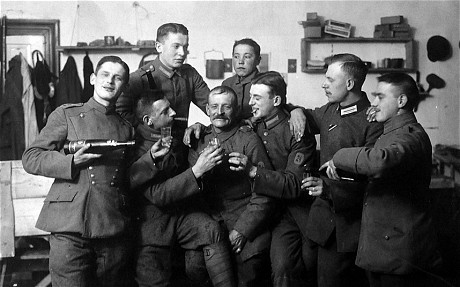 The pictures show life for Imperial German Flying Corps officers behind the lines and between sorties in which many of them will have lost their lives.

According to the Daily Telegraph, next to nothing is known about the men in the photographs although they are members of 24th and 54th squadrons (or Jastas in German) and largely photographed in around 1917.

Many of the photographs show the men in various states of inebriation, several of them at Christmas time, drinking wine, Champagne, beer and schnapps; while others, such as the one at the bottom of the page, are more sober reflections on the reality of first world war aerial combat.

The casualty rate among First World War pilots was famously parodied in the comedy sitcom Blackadder.

In one show the protagonists join the Royal Flying Corps which is cheerfully nicknamed the “20 minuters” a grimly black joke referencing the average life expectancy of aviators.

Only 11 years after the Wright brothers pioneered flight a young airman was as likely to be killed or kill himself in his flimsy aeroplane as be killed in action by the enemy.

RFC – later the Royal Airforce – pilots lived by the motto “live for today, tomorrow we die,” and their German counterparts were little different.

The photos will be auctioned by Essex auctioneer Reeman Dansie this Thursday and have a reserve of £1,500.

With the centenary of the Great War imminent and with the rarity of the find, it is likely the photos will attract a lot of interest.

James Grinter at Reeman Dansie told the Telegraph: “I have never seen anything like this photo album before.

“If it was a Royal Flying Corps album, then it would be rare but to have a German one from the same period is unheard of.

“The survival rate of these flyers was terrible and it looks like these men lived life to the full while they had the chance.

“It is a very important and historical record and is unusual because there are a lot of natural and relaxed pictures rather than the staged and formal photos of that period. It gives you a feel of what it was like to have been there.

“It wouldn’t surprise me if this album ended up going into a museum because it is so rare.” 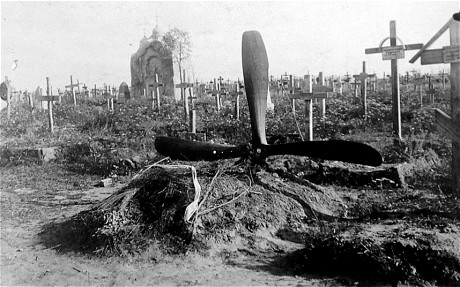 More from the drinks business: