Begin the return to gin

Gin is nothing if not resilient. It seems to be the spirit that has managed to re-invent itself more often than any other I can think of.

First we had Genever. Then we had an awful, ersatz English version of it that was demonised in Hogarth’s Gin Lane. Next came the rise of the London Dry and Old Tom styles. It was the spirit of choice for hundreds of classic cocktails at the turn of the century. It was forgotten about in the late 20th century, and has enjoyed a revival in the 21st. It has died and risen, phoenix-like from the ashes, regularly in its turbulent history. And it now looks like it might be re-establishing itself yet again.

With the exception of the dark days of the “Gin Craze”, gin has almost always been consumed as a mixed drink. From early efforts to mask crude distillations, to the medicinal qualities of the gin and tonic, through to the classic cocktails such as the White Lady and the Corpse Reviver, gin has always been the most sociable of spirits; blending perfectly with other ingredients. Even that hard-core, near-neat epitome of the cocktail, the Martini, contains an proportion of vermouth, water (or bitters if you’re really old-school!) and sometimes olive brine. If that’s your thing. These days, with the exception of comparative tastings and the odd brand ambassador, gin is very rarely drunk neat.

Gin is a fantastically aromatic and complex spirit, but because of its inherent mix-ability coupled with negative connotations of drinking neat gin (thank you, Hogarth), enjoying it unfettered seems to be frowned upon or at least viewed with incredulity. Vodka is consumed neat without comment, as are brandies, rums and whiskies/whiskeys. So why is there an issue with drinking neat gin?

Personally, I can’t think of a single argument against enjoying gin neat. There is only really one rule when it comes to making gin (ok, there are others, but for the sake of simplicity I’m only talking about this one) and that is that it must be flavoured predominantly with juniper. Once you’ve got that, you can use just about anything that is decent, honest and legal. And people are doing just that. All sorts of weird and wonderful botanicals are now being used to varying degrees of success. This gives gin possibly the widest scope of flavour possibilities available to just about any spirit. To me, drinking it unadorned is the perfect way to appreciate all these different characteristics and subtleties.

Another thing has been happening lately that may help the uninitiated enjoy drinking gin on its own, and that is aging gin. This is not an entirely new idea, but it seems to be a route that some producers have been taking and, a few weeks ago, we at Beefeater were extremely proud to launch our third permanent addition to the Beefeater family: Burrough’s Reserve. 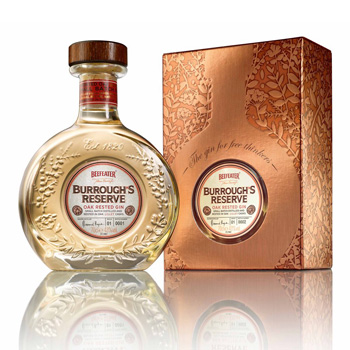 Beefeater Burrough’s Reserve has been in development for the last five years under the watchful eye of our Master Distiller, Desmond Payne. Desmond has been making gin for longer than he’d care for me to mention; and it’s his meticulous attention to detail and unwillingness to rush anything (especially lunch!) that has led to the creation of a gin that is perfectly suited to being enjoyed in its full, natural glory, unencumbered by mixers.

Burrough’s Reserve is distilled in one of our founder, James Burrough’s original copper stills from the late 1800s, using his original recipe. The unique shape of this still gives it a fuller, more complex flavour than regular Beefeater. This spirit is then rested in Jean de Lillet oak casks, each hand-selected by Desmond, until he deems it ready. Jean de Lillet is an aperitif wine made from Sauternes and Semillon grapes, only made when there is an exceptional vintage and aged for up to 12 months in French oak barrels. When the gin is resting in the barrels it takes on some of the vanilla, fruit and spice characteristics of the Jean de Lillet, also developing a rich, golden hue.

We have done extensive tastings with Burrough’s Reserve and have concluded that it is best enjoyed neat, initially served at -10 degrees C and allowed to slowly reach room temperature in order to allow the full flavours and aromas to develop. It also works well in pairings with food – dried and fresh stone fruits such as apricot, peach and dates really bring out the sweet notes from the Jean de Lillet, and even cheeses such as comte, goats’ cheese and mature cheddar work well too. This makes it a perfect alternative to traditional after-dinner spirits and I’m sure that many spirits enthusiasts will be intrigued enough to give it a try.