New research by Laithwaite’s has picked out the words and phrases that consumers find the least and most useful when describing wine. 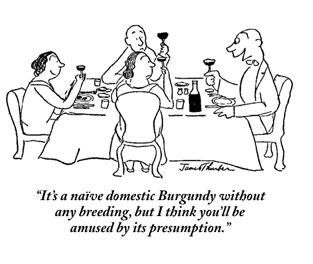 When polled, 55% of the 1,000 volunteers (who were all “reasonably well-informed” about wine) said that many descriptions did not help them understand the taste.

Forty-three tasting notes from leading wine brands and critics were presented to the test group, which in turn was asked to pick the terms it found the least helpful.

The use of the latter word has lead to increasing discussion of its use, as the drinks business has previously reported.

Although widely touted when describing terroir, Sally Easton MW explained that actual mineral elements in wine, “are not only minimal but also tasteless”.

“Fresh” was regarded as the most useful word, along with “zesty” and “peachy”.

Justin Howard-Sneyd MW, a consultant for Laithwaite’s Wine, said that the results were not surprising: “Describing wine is not an exact science; wine and taste are very personal, very subjective things.”

A wine that I think tastes of cherry, could taste totally different to someone else, so it’s no wonder that there is such a vast variety of language when it comes to wine descriptions.

“We have probably been guilty ourselves of using overblown language in the past but this is a wake-up call to the whole wine industry to make a change.”

The issue of “flowery” tasting notes cropped up again recently, with Andrew Jefford in his column for Decanter arguing that while “a well written tasting note has practical worth”, even established writers are capable of turning out, “inadequate, boring, incoherent or risible notes”.

Hugh Johnson in his book “A Life Uncorked”, remembered being asked if he liked the way wine was described on television, to which he replied that: “It makes good television…but I don’t think it really helps anyone to give what sounds like a recipe for fruit salad.”

In the book he argued that too many tasting notes had become formulaic, an unintended consequence of the creation of the “aroma wheel” by professor Anne Noble and a similar method of aroma breakdown devised by professor Emile Peynaud.