The science behind ‘beer goggles’ explained

A senior lecturer at Durham University’s Department of Psychology has revealed that the area of the brain that makes us want to mate is the key to the so-called “beer goggles” effect. 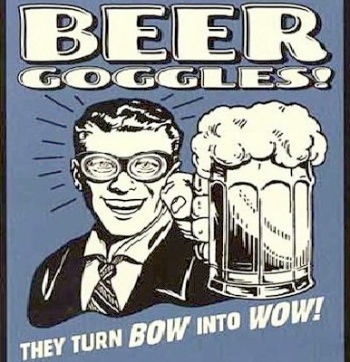 In her new book, “Getting Your Head Around the Brain”, Dr Amanda Ellison explains that men and women do not see each other differently after consuming alcohol, but alcohol shuts down some of our decision making functions before it suppresses the part of the brain that controls sexual urges.

Dr Ellison told the Daily Telegraph: “We still see others basically as they are. There is no imagined physical transformation — just more desire.

“Hangovers are caused by dehydration – the brain shrinks and tugs on the meninges which causes the headache.

“But before that, alcohol switches off the rational and decision making areas of the brain while leaving the areas to do with sexual desire relatively intact, and so this explains beer goggles.”

Dr Ellison also dismissed claims that women do not get beer goggles adding that while evolution has made women more choosy when it comes to selecting a partner, this changes after drinking alcohol.

She said: “Women use more of their brains for certain decisions, sometimes using both sides of the brain. Women look at sex differently to men. It has always been a bigger deal for women because of the pregnancy risks.

“As recently as the seventies they would have weighed things up a lot more because they could be burdened for the rest of their lives.

“With better contraception and more binge drinking they are more likely to get beer goggles.

“Beer goggles depend on our ability to make rational decisions.”

Previous theories regarding the beer goggles effect have included the ability to detect facial symmetry changing and alcohol making us believe we are more attractive than we are.