An archaeology graduate, ever-enthusiastic Ernie Loosen is the manager and winemaker at Dr. Loosen in the Mosel Valley in Germany. Loosen is largely responsible for putting German Riesling on the map. He lives in the Mosel with his wife and their beloved greyhound Diana (pictured). 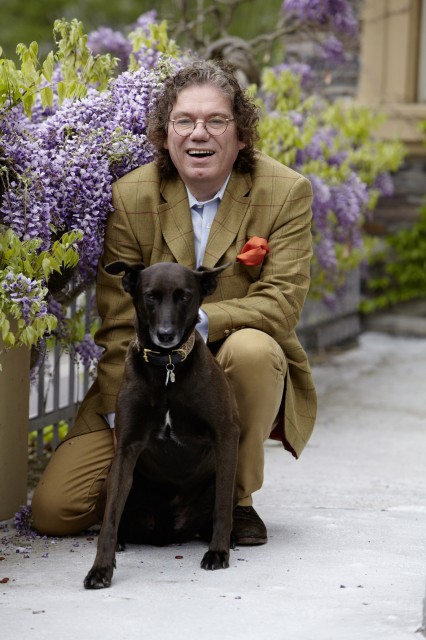 A world of true wine fanatics, where people spend their time loving life instead of killing each other.

That global warming will eventually make Riesling unviable in the Mosel. It would be a real tragedy to lose such a unique and distinctive style of wine.

Pampering my dog. Diana is a rescue dog, so I feel that she deserves extra-special love and attention. She is treated like a queen. But to be frank, I tend to go overboard with all of my animals.

The “m” word. Minerality is so overused as a term and I’m guilty of it myself. It’s a word that once had meaning, describing the acidity in a wine, but now everyone uses the “m” word whether a wine has acidity or not. It’s been watered down so much that it’s lost its meaning.

My wife and my dog Diana.

During my college years. It was my first time living away from home on my own. I had no responsibilities, and total freedom to do what I liked. I lived in a commune, and we would sleep late every day, hang out in the kitchen having breakfast until 3pm, then slowly plan the evening. Those were the days…

I’d like to play a musical instrument. Noone in my family did that. I’d like to sing and play the piano.

I wish I was more organised.

Having started in the wine business at a time when the entire German wine industry was dead, and believing in a grape variety that was even more dead, it’s enormously gratifying now, after 25 years, to see Riesling gain back the reputation it deserves, and to know that I played some part in that.

I am where I want to be.

My private wine collection. I adore my Burgundies even more than my cars.

Despite my cynical nature, I genuinely love life.

Who are your favorite writers?

In college, my favorite books were the Douglas Adams series, The Hitchhiker’s Guide to the Galaxy. I was also a huge fan of Friedrich Hölderlin, the late 18th century German romantic who lived alone in a tower, writing poems.

Lousy wines made carelessly, with no vision, thought or authenticity, and people with no sense of humour.

I don’t dwell on regrets. Every day is a new experience, and there is something positive in every experience. Saying that, if you never regretted anything, how would you learn to do things better and improve yourself?

Frederick the Great, John Cleese and Neil Young. For these great men, I would pour three great Rieslings: a light and fruity Kabinett from Bernkasteler Lay, the vineyard that surrounds our house; a very old Auslese from Wehlenner Sonnenuhr; and a wine from our most noble vineyard, Erdener Prälat. To pair with them, I’d serve a wild boar hunted in the same vineyard the Auslese came from, prepared according to my great grandmother’s recipe.