Master of Malt has drawn on a Victorian recipe to launch a gin made from cold-distilled cream. 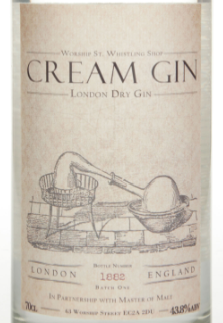 Created in partnership with Fluid Movement, which owns inventive London cocktail bars Purl, The Worship Street Whistling Shop and Dach & Sons, the product involves “a secret combination of ingredients” – including fresh cream – being macerated with a “citrus-forward” gin and then cold-distilled.

In contrast to the Victorian recipe, which saw gin mixed with cream and sugar before being stored in a barrel, presumably as a way to soften the harshness of the gin, this modern method uses cream as if it were a botanical rather than a straightforward infusion.

Combined with the spirit prior to distillation, the cold temperatures ensure there is no burnt or “off” cream character to the finished liquid, which is transparent. Instead, its creators describe the result as “a luscious spirit with full mouthfeel and strong notes of dairy and vanilla.”

The cold distillation process also ensures the removal of larger molecules, which would break down over time. As a result, Cream Gin does not need to be kept in a fridge and promises the same shelf life as any other spirit.

With an RRP of £41.95 and 40% abv, Cream Gin is currently on sale through Master of Malt, as well as Selfridges and Harvey Nichols. It also forms the base of The Worship Street Whistling Shops’s signature cocktail, Black Cat’s Martini.

Previous flavour experiments with the category, such as Hoxton Gin’s coconut and grapefruit expression, have provoked controversy over how far gin should depart from EU regulations, which state that it must feature a predominant juniper flavour.

By contrast, the vodka category is no stranger to creative flavour experimentation, which has resulted in examples such as bubble gum or smoked salmon.