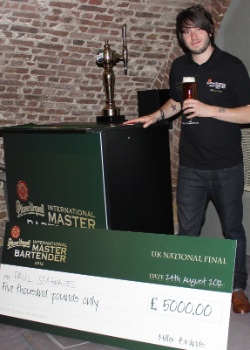 Seagraves was up against eight fellow bartenders competing to replace the 2011 champion, Robert Kecskes from the Anthologist.

Having triumphed, Seagraves was awarded a £5,000 and will be flown to Pilsen this October to take part in the Czech brewer’s Master Bartender Final.

There he will go up against bartenders from around the world in a bid to be named Pilsner Urquell Master bartender and win a €10,000 cash prize.

Lucy Jordan, director of trade marketing at Miller Brands, said: “The quality of the bartenders taking part in the Pilsner Urquell Master Bartender programme is improving every year.

“It’s inspiring to see so much skill, passion and knowledge displayed by these professionals. Paul really stood out from the other finalists thanks to his unrivalled knowledge of Pilsner Urquell and exemplary bar skills. “