London pub owner and brewer Fuller, Smith & Turner has reported a sales decline due to the wet summer. 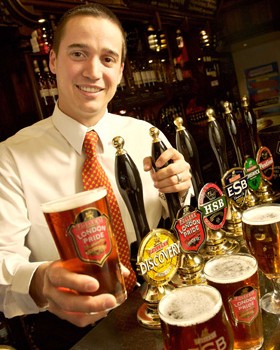 Total sales for Managed Pubs and Hotels grew 8.0%, but the persistent rain affected sales in a large number of pubs with gardens, causing like for like sales to decline by 1.1%.

The Queen’s Diamond Jubilee and Euro 2012 benefited the other parts of the business more noticeably, with Tenanted Inns like for like profits up 1% and The Fuller’s Beer Company total beer volumes growing by 1%, helped by the launch of Hope and Glory in May and Wild River in June.

In common with other pub companies, Fuller’s beefed up its presence in central London in readiness for what it hoped would be a bonanza summer in the capital.

It says the 30 pubs it bought last year are “performing well” though some are still being refurbished.

Chairman Michael Turner is still optimistic that the summer will be salvaged, noting that the eyes of the world will soon be on London.

“With the opening ceremony a mere nine days away and as the Olympic Torch weaves its way closer to the capital, past a growing number of our pubs and hotels, we can see the excitement building,” he said.

“The brewery is running at full tilt to ensure that everyone can celebrate with a pint of London Pride.”